By Karl Ackermann
October 10, 2015
Sign in to view read count 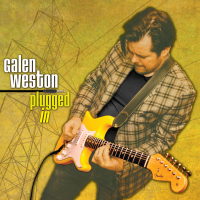 Moving from his high school listening experiences of groups like ACDC and Kiss, guitarist Galen Weston discovered jazz through the influences of well-established guitarists such as Pat Metheny and Mike Stern. After attending the highly-regarded jazz program at Toronto's Humber College, Weston opted out of music for more than ten years while pursuing other business interests. While traveling, a chance sit-in at a bar session in a small Greek town reignited Weston's interest in music. The result of his self-imposed emersion is documented on Plugged In.

After trading in his childhood acoustic for a yellow Fender Stratocaster, Weston brought together a group of seasoned Toronto session players for his debut. Bassist David Woodhead has worked with Gil Scott-Heron and Loreena McKennitt while percussionist Rick Shadrach Lazar's credits include Canadian alternative icon Bruce Cockburn as well as McKennitt. Drummer Al Cross has worked with The Black Crows and recorded on the Windham Hill Records label. Saxophonist Richard Underhill has performed and recorded with drummer Han Bennink, Julius Hemphill and Taj Mahal. His solo on "Song for Daphne" is particularly appealing.

Weston wrote ten of the twelve songs on Plugged In with "Like Someone in Love" penned by the 50s-era pop composer Jimmy Van Huesen and "Country" written by Keith Jarrett. The Jarrett tune—from My Song (ECM, 1978)—originally featured a soulful performance from tenor sax performance by Jan Garbarek whereas Weston's interpretation is more in the style that the title would indicate. One of several styles tackled by Weston, Plugged In opens with the fusion piece "Funk Opus #2" and like "Bensonite" (for George Benson), "Galen's Vice—A Tribute to the 80s," "Tasteless," "Late and Never" and "Rock Jam," much of the album skews toward rock.

The more jazz oriented compositions, particularly "A Song for Daphne," "The Yellow Guitar (A Guitarra Amarela)" and "Austin" (with a fine solos from pianist Matt Horner and Woodhead) fit comfortably in the smooth jazz category and are in sharp contrast to the fusion pieces. Weston is a gifted technician with a fine sense of lyricism. The disparity and placement of styles can sometimes be disconcerting but, in general, Plugged In should help Weston shape a following based on his potential as both composer and performer.

Funk Opus #2; Song for Daphne; Bensonite; The Yellow Guitar; Rose Garden; Country; Galen's Vice - A Tribute to the 80s; Austin; Tasteless; Like Someone in Love; Late and Never; Rock Jam.