BY DOUG COLLETTE
October 10, 2015
Sign in to view read count 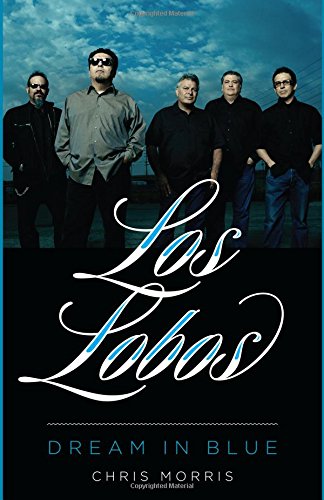 The best books about music and musicians are a direct reflection of their subjects and Chris Morris' chronicle on Los Lobos, Dream in Blue, is just such a book. Like the best sets by the band itself, the story moves with no little momentum through its one-hundred eighty-two pages because the author recounts the evolution of the group, as friends and collaborating musicians, in such a mesmerizing fashion.

In fact, Morris' account of the gestation of Los Lobos sounds like he's talking off the top of his head. Or it would, that is, if he did not also include so much detail about the geography of the east Los Angeles area in which they were born and raised as well as the culture as it's evolved over generations. It only makes sense the chapters unfold with such rapidity at the outset of Dream in Blue-that's how Lobos coalesced, as if in cumulative events of destiny including the enlistment of multi-instrumentalist/production ace Steve Berlin-but it's also the author's tone, full of barely contained excitement at what he's recounting.

In line with that momentum, the growing bond between the four core members-David Hidalgo, Louie Perez, Cesar Rosas and Conrad Lozano—gives birth to a collective sense of adventure and willingness to stretch themselves beyond the self-established boundaries at each juncture of their career. This suspenseful sequence of events reaches its brightest flash-point, at least in creative terms, with the recording and release of Kiko(Warner Bros. 1992). As widely well-received as was that experimental album, however, the group's penetration into mainstream culture, inexorably progressing via Grammy awards for exhibitions of their Mexican roots, reached deepest in 1987 with the popularity of "La Bamba:" the nonchalant recording of the late Richie Valens' hit,for the movie of the same name, caught Lobos by surprise, and, Morris suggests, validated their efforts to that point, even if it only scratched the surface of their capabilities as in evidence on records of their own like How Will The Wolf Survive? (Slash, 1984)).

To his great credit, the 'Billboard Magazine' and 'Hollywood Reporter' contributor does not allow his narrative to flounder even as Los Lobos career does in subsequent years, largely for business reasons, but also because, instead of deliberately consolidating their aforementioned success, they chose to record the largely acoustic, La Pistola y el Corazon (Slash, 1988). In fact, the clarity Morris brings to the situations involving record labels, is remarkably lacking in any emotional overlay within his words or those words of the band-members themselves.

The author wisely recognizes side-projects such as the Latin Playboys as integral to the continues inspiration of Lobos proper, even in the wake of difficulties writing and recording albums including Colossal Head (Warner Bros., 1996), And his disappointment is nearly as palpable as that of the band's in the public reception afforded the collective epiphany that is The Town and The City (Hollywood, 2006), its sterling cohesion, he astutely notes, due at least in part due to shows in which the band performed Kiko in its entirety.

Weaving together his various interviews with Los Lobos over the course of three decades for Dream in Blue, Morris creates a stream of consciousness tone perfectly suiting the book's title that falters only slightly toward the conclusion. But the tale regains its altogether vivid qualities as the writer attends Los Lobos' appearance at its old stomping grounds in Los Angeles, the Whiskey A Go Go, to commemorate their fortieth anniversary. Here more than anywhere else in the book, he drops the facade of objectivity he maintains oh-so-gingerly in covering the late Nineties and early two-thousands and becomes a fan pure and simple. Even so, he preserves his perspective with the healthy detachment that derives from refusing to trade on his long-term relationship with the band: he can't gain admission backstage after the show to greet the group.

It's an altogether fitting conclusion to a book that sets itself up for a revised edition by its three line footnote reference to the release of Gates of Gold (429 Records, 2015), impending at the time of publication. Along those same lines, Chris Morris' audiography, presented in essay fashion rather than more detailed listings with release dates etc, somewhat diminishes the scholarly impact of Dream In Blue: granting his wizened observation on the changing configurations of music's availability over time, he misses a great opportunity, at least temporarily, to create something of a definitive resource of information on Los Lobos, whose presence as a cultural entity may even transcend its singular influence as a musical unit..