Toronto Jazz Guitarist, Galen Weston, is a bringing a fresh new sound to jazz with his beautiful guitar tones and undeniable skills. Galen first picked up a guitar at age 11, a Sears acoustic guitar - the consolation to the electric guitar he had actually wanted for his birthday. There was only one thing to do, save his own money for the next two years to purchase an electric guitar. The new guitar in hand, Galen started experimenting by plugging it into an amplifier and boom box, to less than ideal results at first! But he was hooked, and happily gave up academic ambition to focus on the guitar, which he would play up to 10 hours a day. Without a television at home, and parents who didn’t approve of rock ‘n roll, Galen’s musical education began with the clandestine ACDC and KISS records he snuck home

Moving from his high school listening experiences of groups like ACDC and Kiss, guitarist Galen Weston discovered jazz through the influences of well-established guitarists such as Pat Metheny and Mike Stern. After attending the highly-regarded jazz program at Toronto's Humber College, Weston opted out of music for more than ten years while pursuing other business interests. ... 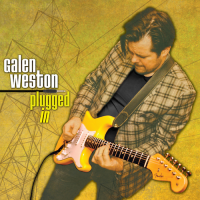 Guitarist and composer Galen Weston unleashes a lifetime of music on his ambitious debut album, Plugged In. After laying down his guitar for more than a decade, Weston breathes life into his almost forgotten songs, recording 10 original tracks and two covers with fine craftsmanship and intense focus, while showcasing an unwavering dedication to tonal quality ...

Disqus comments return to All About Jazz! Learn more.