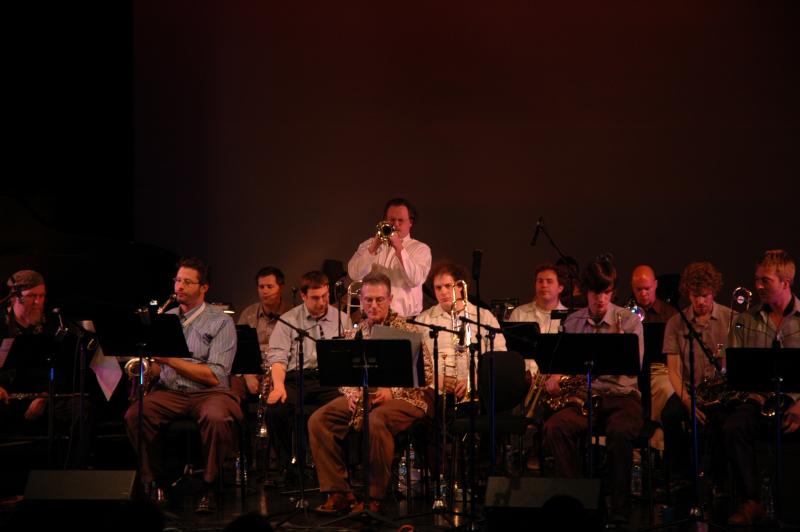 By Victor L. Schermer
October 5, 2015
Sign in to view read count
Anyone familiar with the music business can tell you that it's hard enough to get a big band together for an occasional gig, let alone sustain it over an extended period of time. The time and effort involved in composing and arranging new charts, covering the cost of twelve or more musicians, and meshing their complicated schedules, all militate against the longevity of such enterprises. Thus, a working big band that features the best players performing challenging cutting edge jazz year after year is, in principle, almost an impossibility. Yet, for over a decade and a half, that is just what saxophonist Bobby Zankel and his ensemble of experienced, creative musicians -the Warriors of the Wonderful Sound -have managed to achieve. Through a combination of talent, experience, persistence, dedication, and the magic of group cohesiveness, they have beaten all the odds, working year after year to deliver music that excites and challenges their audiences.

What's their secret? In reality, it's no secret at all, but a matter of a few crucial ingredients that Zankel has mixed together in just the right way. First, there's Zankel's remarkable ability to compose and arrange charts, honed in his work with the likes of Cecil Taylor and Odean Pope, along with rigorous training in composition and improvisation with the great guitarist and educator Dennis Sandole, who also mentored John Coltrane, James Moody, Pat Martino, and a host of other jazz icons. Second , Philadelphia has long been a hub of remarkable jazz musicians who have an independent spirit and proven ability to press the limits of the music. So there's no shortage of talent here. Finally, in the past few years, Zankel's music, vision, and resourcefulness have earned respect and support from the Pew Foundation, the Philadelphia Jazz Project, Ars Nova Workshop, and the Painted Bride Art Center and the Philadelphia Clef Club of Jazz, which have hosted Warriors concerts at their respective venues. The community is behind this venture, and fans come out in droves for the concerts.

The Warriors are true musical conquistadors. Take, for example, virtuoso violinist Diane Monroe, who, inspired by her friendship with the late John Blake, Jr., has seriously expanded the range of improvised violin playing. Saxophonist Julian Pressley can play anything from bebop to Coltrane-inspired ballads to chromaticism to free "harmolodic" music. Pianist Tom Lawton impresses musicians and audiences alike with a constant creative output, including a recently commissioned composition based on the work of the modern artist Man Ray. Valve trombonist. EVI player, and former trumpeter John Swana has innovated new harmonies and structures for valve instrument players. Francois Zayas is rapidly expanding the envelope of percussion possibilities. The list of accomplishments goes on and on for each of the dozen or so band members. Every one of them fronts their own groups while also having performed with icons like Max Roach, Benny Golson, Illinois Jacquet, Mongo Santamaria, Don Byron, and the Charles Mingus Big Band. Maria Schneider's jazz orchestra may be the only other current large ensemble that rivals the collective achievements of the Warriors' personnel.

In addition to their remarkable and varied talents, what is most impressive about the Warriors is their persistence in delivering the highest level of musicianship year after year, without any hint of letting up. Like many jazz groups, they started out in a small club, the Tritone on South Street, which has often provided a home for cutting edge musicians. In 2001, the Warriors became the Tritone house band for over ten years. After they cut their first recording, Ceremonies of Forgiveness (Dreambox Media, 2006), they gained notoriety and were able to perform at larger venues. Three concerts at Montgomery County Community College brought in innovative saxophonists Rudresh Mahanthappa, Steve Coleman, and the great pianist Muhal Richard Abrams performing their own advanced compositions. A highlight of the Warriors' move into the spotlight was an outdoor performance on the University of Pennsylvania campus of Zankel's arrangement of John Coltrane's A Love Supreme, featuring singer Ruth Naomi Floyd and tenor saxophonists Dave Liebman and Odean Pope. Zankel's arrangement preserved Coltrane's legacy while establishing its own new ground of beauty, adventure, and spiritual expression. That memorable performance of A Love Supreme fueled the band's forward movement as well as growing community enthusiasm for the Warriors. Zankel's charts are tight and coherent while giving the musicians great flexibility and individuality. They also allow him to switch gears on the spot when he feels something great is brewing, a way of increasing interest and momentum that is usually reserved for smaller groups.

In the past two years, Zankel and the Warriors have accomplished something rare for recent big bands: a series of concerts featuring guest artists each of whose playing is unique and challenging. Each concert in the series stretches the range of the Warriors, is a growth experience for the guest soloists, and brings new and mind-blowing sounds to the audiences. When a musician whose own approach is cutting edge comes together with a group of musicians with their own ideas and who can do almost anything, the result is inevitably going to be a new and exciting experience. As Ornette Coleman once stated: "Music is an idea, not a style." For the past two seasons, the Warriors' roster of soloists have included Dave Burrell, Don Byron, Rudresh Mahanthappa, and Jaleel Shaw. The Warriors are probably the only big band around that can keep up with such innovators.

That list just foretells a taste of what is to come. This fall, on the evening of October 13 at the Painted Bride Arts Center, the Warriors have lined up tenor saxophonist Odean Pope. On the same bill, consistent with Zankel's long time interest in mixed media, will be choreographer, dancer, and multifaceted artist Raphael Xavier . Then, on November 4, the Warriors will feature the prolific saxophonist, composer, painter, and poet Oliver Lake. On December 2, Steve Lehman, saxophonist, composer, and Downbeat Rising Star Jazz Artist of 2015, will appear with the Warriors. If you look at the list of guest artists past and present, you'll find nothing less than a pantheon of musicians who have pushed the limits and contributed new dimensions to jazz. Without them, jazz would not be what it has evolved into today.

It is almost dizzying to think about what the Warrior musicians and their guest artists are contributing to jazz in the New Millennium. They have broken all records for creative musicianship, and their performances are invariably exciting and generative. As their train keeps moving ahead, nobody can say what will happen at their next stop, except that it will be well worth everyone's attention.