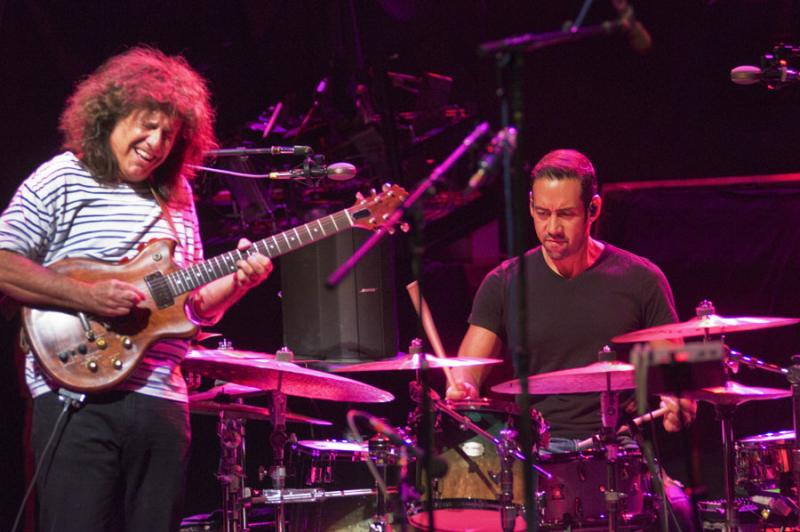 "Every time we're planning a tour," he said to the near-sellout crowd at Ottawa, Canada's Centrepointe Theatre, "I always ask 'are we going to play Ottawa?' You think I'm joking..."

It's not often that the opportunity arises to catch a group near the beginning and end of a year-long world tour but, after seeing guitarist Pat Metheny's Unity Group at Stavanger, Norway's Mai Jazz Festival in early May, 2014, a second opportunity arose to catch the group's tour in support of Kin (<—>) (Nonesuch, 2014) in Ottawa and learn just how far the group has come in the six months separating the two dates.

And a lot has happened. Metheny doesn't get to Ottawa as often as he used to; his last visit to the city was as part of the reunited Gary Burton Quartet in 2009 that featured, in addition to the vibraphonist who gave Metheny his first big break back in the 1970s, bassist Steve Swallow and quartet newcomer Antonio Sanchez, who has been Metheny's drummer of choice since the early part of the new millennium. But the last time the guitarist played Ottawa under his own name was in 2005, in support of Pat Metheny Group's The Way Up (Nonesuch, 2005), before returning to Montréal (where he'd been By Invitation artist for the previous five days) to close the Festival International de Jazz de Montréal the following night with the final show of the tour, performing in front of 125,000 people at a free outdoor show in the city's downtown core.

Perhaps it's true that absence makes the heart grow fonder. Metheny may not get to Ottawa as often as he used to—for the decade beginning in the late '70s, the nation's capitol was a regular stop for the guitarist's PMG tours—but between the enthusiastic audience at Centrepointe Theatre and a band that has crisscrossed the world in the past six months and is all the stronger for it, Metheny delivered a show that actually rivalled his early '80s PMG performance on a warm summer's evening at nearby Camp Fortune. That open air show has remained a high point for Metheny fans old enough to have been there, but those attending this Pat Metheny Unity Group show were treated to a very different kind of band playing music that reflected Metheny's now even broader interests, ranging from complex, long form writing to flat-out improvisational flights of near-reckless abandon.

As wonderful as PMG shows have always been, Unity Group has proven itself a far more versatile band, its core quartet of reed/woodwind multi-instrumentalist Chris Potter, bassist Ben Williams and drummer Antonio Sanchez capable of playing literally anything the guitarist threw at them, and "utility player" Giulio Carmassi (who played keyboards, flugelhorn and vocals but plays even more instruments on Kin (<—>)) filling in all the gaps needed for the quintet to perform material off its current recording.

But beyond music from the core quartet's 2012 Nonesuch debut, Unity Band and the expanded Unity Group's Kin (<—>), Metheny's current group has also proven itself capable of satisfying those looking to hear music from across his 40-year career; and so, for those less familiar with Kin (<—>) and Unity Band, there was plenty of music drawn from earlier albums including Bright Size Life (ECM, 1976), Offramp (ECM, 1982), Letter from Home (Nonesuch, 1990) and