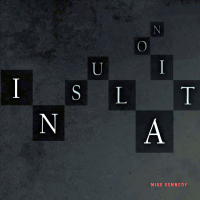 This unpretentious but edifying album consists of a series of guitar originals which flow into one another to form a unified whole. The music is relaxing, with a light swing that calls to mind guitarists like Wes Montgomery and Jim Hall, and might be called, to coin a phrase, "soft bop." Mike Kennedy, guitarist and leader, Mike Frank, piano, Paul Gehman, bass, and Dan Monaghan, drums are all Philadelphia-based musicians with extensive track records (no pun intended), and the consistency among the tracks is reminiscent of a little known but outstanding recording by the late great Philly bassist Al Stauffer and the very much alive and thriving pianist Tom Lawton: Blue Alterations (Direct-to-Tape Recording Company, 1982; 2004), with its freshly improvised originals that represent transformations and elaborations of one another, affording a natural flow of changes and ideas from beginning to end.

You can boot up Insulation and let it roll through your consciousness. It will gently "insulate" you from all the noise, hype, and distractions while providing ample stimulation to the musical mind. When asked why he chose the somewhat ambiguous term "insulation" for the CD, Kennedy said, "In this case, insulation is a feeling of keeping things like memories and emotions close. Not in a guarded or protective way, but more like an embrace. Those things and moments that have had some impact on my life." Jazz is in many respects a process of nurturing daily memories and stories through music, and this album does that very well.

All stories and memories occur within time that bends and shapes itself from the feelings that go with it, and this album paces itself in just that way. Tune titles like "Meridian," "Reminder," "Compression," and "Elastic" all suggest Einsteinian time that bends, repeats, contracts, and expands according to the velocity and gravitational pull. This album has the resilient feeling of quiet times in our lives, when some moments slow us down and others happen in a flash. But it also quickens and awakens us so that we pay more attention to the preciousness of what we have been given.

There are several characteristics of this album which make it well worth a listen. For one thing, Kennedy's sonority and technique are supremely lucid and beautiful. You'll rarely hear jazz guitar playing that is so well-appointed and comfortable to the ear. For another, Kennedy's improvising is well-nigh flawless. While not subject to the "shock and awe" you're going to hear with super-virtuosos like Jimmy Bruno and Pat Martino, Kennedy is one of few musicians who never plays a bad note or has embarrassing pauses when he can't think of anything. Every phrase is carefully nuanced and in synch with the harmonics and the overall trajectory of the tune. If you were going on a plane trip, you'd want a pilot as seamless and competent to take you there.

Kennedy's sidemen are in tune with Kennedy, and they support his work splendidly. Pianist Mike Frank uses a minimalist approach to home in on ideas that complement Kennedy's without imposing a foreign complexity upon them. Bassist Gehman and drummer Monaghan provide impeccable timing and generate just the rhythmic ideas that every soloist wants for an inspiring but unobtrusive backup.