BY DOUG COLLETTE
November 22, 2014
Sign in to view read count 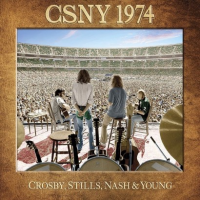 Its multi-foldout package of three CD's, DVD (or Blu-Ray) and a one-hundred eighty-eight page booklet as smartly designed as it is handsome, CSNY 1974 represents a painstaking labor of love on the part of Graham Nash, who supervised the project over a protracted period of time, in collaboration with co-producer Joel Bernstein and engineer Stanley Tajima Johnston as well as Stephen Stills, David Crosby and Neil Young. The audio and video recordings within document a much ballyhooed reunion that's been subject to retrospect and revisionism since the foursome's summer tour of largely outdoor venues occurred four decades ago.

Music-lovers who witnessed the event directly, up close at the shows, or from a safe distance, in the media at the time, may be largely underwhelmed by the performances themselves, presented here in the format of the concerts, in which an acoustic roundabout of songs from Crosby, Stills, Nash & Young, was sandwiched between two sets of electric arrangements within which the quartet were supported by bassist Tim Drummond, drummer Russ Kunkel and percussionist Joe Lala (largely indecipherable in an mix unless headphones come into play.) The sonic production in its own way is as careful as the array of songs itself, otherwise kept as balanced as possible among the four composers, the even-handedness applied here reflecting the questionable evolution of the group as it progressed from the original CSN trio to a four-man alignment with the enlistment of Young.

Quite early on CSNY 1974 clarifies that the group's democracy was a misconception pure and simple. While Crosby eventually wrote some of the most memorable of the group's latter-day songs (an early example of which here is "The Lee Shore"), neither songs of his like "Carry Me" nor those of Nash such as "Immigration Man" measure up to those of Stills even at his most facile, like this hard-to-recognize arrangment of "Love the One You're With." And Neil Young consistently trumps the other three with the haunting poetry in material like "Helpless," the result of which dynamic renders it little surprise that the unmistakable vibrancy of genuine chemistry, fleeting at best over the four hours plus total playing time , is usually most noticeable on tunes of the erstwhile Canadian's, such as "Only Love Can Break Your Heart." Intentionally or unintentionally, this (excruciatingly?) detailed archive piece may then be the most accurate depiction of the imbalance of talent and skill within this volatile set of relationships including the erratic one with its audience. As such, it may constitute an act of courage on the part of the group to release it.

The adulation offered these musicians at the time of this much-ballyhooed tour and the longstanding loyalty that compelled its release is thus out of proportion to the actual level of performance, notwithstanding the extended rehearsals that took place at Neil Young's ranch prior to the tour itself. Or, for that matter, the arguable extent to which these recordings have been prepared for release: note how rarely the blend of voices sounds truly exalting on its own terms, and not just in comparison to the studio recordings. While now, as then, it may be unrealistic to expect such scintillating sensation to consistently emanate from the stage, it is may also be true that the once idealized and now fractious community CSNY represent, most obvious perhaps in this fragile reading of "Suite: Judy Blue Eyes," not to mention the thunderous acclamation it receives, simply mirrors the contradictory state(s) of mind held by the attendees of these shows, many (most?) of the owners of this box set and these musicians themselves.

The glib media encapsulation of CSNY as a super-group, i.e., a unit formed from members of bands with varying levels of fame, only played into the misconceptions at the root of the misshapen presentation of their work. There's no denying the most arresting moments within this set, such as when how Young's lead guitar effectively steals Crosby's "Almost Cut My Hair" from its author, or how far apart they appear in the course of the 'show,' largely due to the sequence of the sets. If Crosby, Stills, Nash and Young were a true band, most of the spotlight would rightfully focus on the two men who were members of the vaunted Buffalo Springfield, leaving the ex-Byrd and former Hollie as no more or less than role players. Though the latter duo's skill in singing is undeniable, and hauntingly so on Crosby's "Guinevere," that component of the sound here is no more or less essential than the acoustic and electric guitar playing of Stills and Young or the songs those two authored (many of the latter's, such as "Hawaiian Sunrise" and "Love Art Blues," unreleased at the time and remaining so to this day).

CSNY 1974 is then a mixture of varying and often conflicting points of view, most of which British writer Pete Long touches upon with laudable objectivity in his writing. His comprehensive essay covers the germination of the campaign, its seeds nurtured within the stormy history of the foursome dating back to the late Sixties, through the two-month tour itself and its immediate (and not so immediate) aftermath. Surprisingly or perhaps not, his words are outnumbered by a plethora of photographs, notably few of which show the principals smiling very often (and virtually all of which show Young behind large mirrored aviator sunglasses), contrary to the forced lightheartedness of some of the between song patter here (so duly noted in contemporary reviews of the shows).

The DVD/Blu-ray comprised of a mere eight performances, doesn't offer any great revelations, but some epiphanies nonetheless, especially proceeding directly from the climax of the third CD. The contrast between the literal-minded liberalism of Nash's "Military Madness," complete with a 'No more war' singalong, and the emotional but insightful images in Young's "Ohio." unquestionably his finest topical song, is as great as that between the video quality of four songs each from Capitol Centre in Landover Maryland and Wembley Stadium in England: the former compare favorably to today's professionally recorded content (including the admirable depth of its audio even more so than the CD counterpart), while the latter is amateurish in lighting and camera work, lacking any ingenuity the likes of which appears in its counterpart, as in the artful superimposition of images.

It may well be fatuous or downright inaccurate to state CSNY 1974 definitively lays to rest the romanticism around this group especially since, alongside the Rhino label logo that adorns the back cover, is one that reads 'CSNY Recordings.' a tangible suggestion more such archive releases may be forthcoming under that aegis. If so, it will be fascinating to note how, for instance, the appearance of the revered 1970 Fillmore East performances, long available in their entirety as bootlegs, become public in comparably pristine and polished form. With the vaunted foursome having effectively demystified themselves with this release, further such titles can maintain a similarly accurate perspective.