Home » Jazz Articles » Pat Martino: A Celebration of His Life and Legacy @ Jazz at the Po... 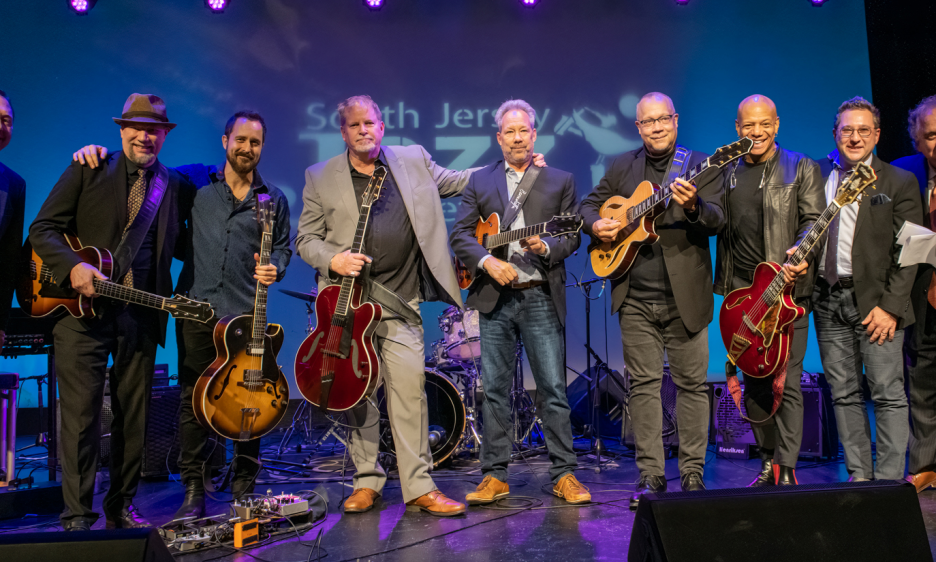 NOTE: A complete listing of the Celebration events and musicians provided by the South Jersey Jazz Society can be found here.

One of the best puns in jazz history appeared in the title of Shaun Brady's preview of this 3-day set of concerts and other festivities. Martino's song and album title, Joyous Lake (Warner Brothers, 1977) became "Joyous Wake" (Philadelphia Inquirer, Nov 3, 2022). Martino, who had an impish sense of humor, would be laughing heartily. And joyous it was: three evenings of all-out performances, mostly of Martino's compositions and recordings, with ensembles drawn from a host of musicians, mostly guitarists, most of whom knew Martino personally and were heavily influenced by him. As in the traditional Irish wake and the New Orleans funerals that presaged jazz, the mourning process was achieved by joyfully celebrating Martino's remarkable contribution to the art of the guitar, jazz, and the lives of many whose souls were touched by him.

Martino left this life at age 77 on November 1, 2021. For logistical reasons, including the COVID pandemic, this tribute had to be postponed for a year. Martino's hometown of Philadelphia hasn't yet paid homage to him. But Joe Donofrio, his beloved manager for the last twenty-plus years of his life, convinced the South Jersey Jazz Society to sponsor the event for their Somers Point Jazz Festival at the Gateway Playhouse, a theater that doubles as a concert hall.

Martino's "rock star" status drew musicians and fans from around the country to this somewhat remote town. Even experienced via live stream on the internet, the energy generated could have rivaled a rock concert by, for example, the great Santana, who was influenced by him and many times praised him. The energy came from the highly charged musicians who came from near and far to honor Martino and his music. Just to mention a few, there was drummer Kenwood Dennard, saxophonist Eric Alexander, pianist Jim Ridl, saxophonist Michael Pedicin, organist Tony Monaco, and drummer Byron Landham, all of whom served as sidemen for Martino. A host of guitarists influenced by him came on strong, including Paul Bollenback, Sheryl Bailey, Barry Greene, Dave Stryker, Mark Whitfield, Jonathan Kreisberg, Joel Harrison, Rodney Jones, Russell Malone, Charlie Apicella, David O'Rourke, Jimmy Bruno, and John Mulhern (who saved Martino's life and inspired him to take up the guitar again after his aneurysm surgery and amnesia). And members of Martino's last trio and quintet (organist Pat Bianchi, drummer Carmen Intorre, Jr., and trumpeter Alex Norris, with saxophonist Nicole Glover substituting for Adam Niewood) did an extended set with various of the guitarists mentioned above.

Backstage, there were warm reunions, embraces, and shared memories by musicians reunited after many years. As we know, Martino's playing was especially driven and intense, and his energy was relived in this incredible mix. Such nuclear power was concentrated into a Los Alamos-like atom bomb by the event impresario Joe Donofrio and his associates from the South Jersey Jazz Society, who created three action-packed evenings and a Sunday brunch with not a moment to spare. Emcee Bill Milkowski, journalist, author, and co-writer of Martino's autobiography Here and Now (Backbeat Books, 2011) set the stage with reflections on Martino's history. Even the intermissions were filled with video testimonies from a legion of musicians and friends sharing memories of Martino and testifying to the ways he transformed them and the music. And right after the concerts, there was jamming and conversation at Gregory's Restaurant down the road, where musicians and fans gathered late into the night and enjoyed a relaxing Sunday brunch after a head-spinning three nights of non-stop action.

Just to give a taste of the musical sets that were performed, we'll look at two shining examples: the Friday evening set with the Jim Ridl Quartet and the two Saturday evening sets with Pat Bianchi and Carmen Intorre, Jr. providing the rhythm section, as they did for Martino in his last decade. Like the other performances, these sets recapped songs that were either Martino's original compositions or among his favorite standards. That's very important because it reminds us of the prolific heritage of oft-played songs, ground-breaking records, and uniquely moving interpretations of standards he gave us. Despite his star status, Martino does not get enough credit from historians as a key figure in the evolution of jazz. He brought together aspects of soul blues and jazz fusion in conjunction with swing and hard bop in a seamless way that has become an integral part of the jazz language.

The Jim Ridl Quartet and Guests

Ridl assembled a quartet consisting of himself, Steve Varner on bass, Byron Landham on drums, and guitarist Sheryl Bailey sitting in for Martino. They opened with one of Martino's favorites from Benny Golson, "Along Came Betty." Then, as a centerpiece, they performed Martino's own "You're Welcome to a Prayer," from the album, The Maker (Paddlewheel, 1994). As on the album, Ridl started with a very fine solo, gave the floor to Bailey for a second theme as he did with Martino on the album, and finished with a stunning solo. Some of Bailey's playing was adapted from the album and evoked the Martino touch. Saxophonist Michael Pedicin, who served admirably in one of Martino's groups in the early 2000s, joined the group for another Martino favorite, "Portrait," from Nightwings (Muse, 1994), with a samba rhythm. Striking in this rendition was a beautiful variation with Bailey and Pedicin in unison. And Bailey seemed to know Martino's playing like the back of her hand as she improvised. Martino's "Turnpike" with its stops and starts evoked the chaotic feeling of rush hour traffic. After Bailey and Pedicin soloed, Ridl came in full steam ahead with the remarkable virtuosity that is one of his trademarks.

That completed the set, and the musicians, except for Ridl, took their bows and left the stage to Ridl and guitarist Joel Harrison, who did a beautiful rendition of "Country Road," from the Martino/Ridl duet album, Nexus (HighNote, 2015) that was recorded in the mid-1990s at the Tin Angel in Philadelphia. During his recovery from the aneurysm surgery, a depressed Martino heard Ridl at a club and it inspired him to start working again. He and Ridl then got the duet thing going for eight years. It's possible that "Country Road," which is in a style very different from other Martino compositions, was inspired by Ridl using his North Dakota roots for thematic material. Later on, however, Bill Milkowski noted that Martino wrote it specifically for Chet Atkins.

Members of the Pat Martino Trio/Quintet and Company

On Saturday evening, the audience was treated to two sets in which organist Pat Bianchi and drummer Carmen Intorre, Jr. provided the rhythm section. First, with guitarist Paul Bollenbeck sitting in for Martino, trumpeter Alex Norris, and special guest saxophonist Nicole Glover rounded off the quintet that Martino had used on numerous occasions (Glover in place of Adam Niewood). They performed several tracks from Martino's last album, Formidable (HighNote, 2017). They started off with "El Hombre," the title tune from an early album when Martino was into Soul and organ-based jazz. Trudy Pitts was on the organ in that album, and Bianchi did a serviceable job of capturing her rhythmic approach. All took great solos on this classic tune.

A rendition of Dave Brubeck's "In Your Own Sweet Way" featured Norris on flugelhorn, and trading off with Glover, who inserted a touch of Willis "Gatortail" Jackson, Jr., the soul-blues saxophonist who led the first group Martino toured with and which got him noticed in Harlem and elsewhere. Martino loved ballads from the very start, and Charles Mingus' "Duke Ellington's Sound of Love" was superbly rendered by Paul Bollenback.

Finally, Mark Whitfield joined Bollenback in the fast-paced "On the Stairs," from Martino's fusion and acid rock days in the 1970s. The album Consciousness (Muse, 1975) featured Martino at his peak, and here the guitarists took turns trying to outdo him, which of course is impossible, yet each showed how they went beyond him each with his own kind of virtuosity.

After the Intermission with its video testimonials, Bianchi and Intorre fielded some of the top guitarists influenced by Martino. Barry Greene, Dave Stryker, Mark Whitfield, Jonathan Kreisberg, and Rodney Jones took turns leveraging the master with their own styles. Fortunately, they did not try to imitate him. Rather they played in their own idioms, and yet the Martino influence was undeniable. It was amazing to see how Martino affected all their playing, just as Bach affected all subsequent composers. The overall impression from these guitarists is that Martino was so far ahead of the curve that it was mandatory to learn from him. They ended the set with an outrageous six-guitar version of "Sunny," which had become a signature song for Martino.

Martino's admirers loved and admired the intensity, depth, and inner beauty of both his personality and guitar artistry, and this three-night feast of music and reunions served to remind us of the enormous impact he had on so many musicians. 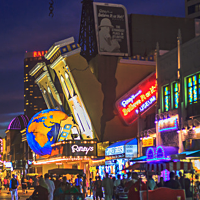