Nicole Glover’s journey in music began when her father introduced her to improvised music at a young age. She began playing the clarinet at the age of ten, transitioning to tenor saxophone the following year. Her interest and curiosity for music began to blossom in high school. She became involved in a variety of performance groups, both within her school and in the community. Nicole was one of 19 students from across the nation to be selected for the Next Generation Jazz Orchestra, who embarked on a national tour that involved performances with Bobby Watson and Julian Lage, concluding with a performance at the Monterey Jazz Festival with Wynton Marsalis. Throughout her musical career, Nicole has had the pleasure of performing with such great musicians as Mulgrew Miller, Wynton Marsalis, Esperanza Spalding, Kenny Garrett, George Colligan, Geoffrey Keezer, Bennie Maupin, Bobby Watson, Mike Clark, Bill Stewart, Essiet Essiet, Mel Brown, Julian Lage, Obo Addy, Rob Scheps, Red Holloway, Terell Stafford, Helen Sung, Dana Hall, Scotty Barnhart, and Thara Memory 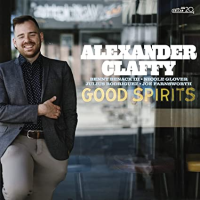 Label: Cellar Records
Released: 2022
Track listing: Inner Glimpse; For the Great Gerald Cannon; I Will Wait for You; There But for the Grace Of; Isotope; Beeb’s Lament; Beijo Partito; Straight Life.

The pandemic affected people in many different ways. For some, it raised new levels of awareness about health and prevention, but for others it also became a means of artistic discovery. This latter point is certainly the case for pianist Caili O'Doherty. In spite of being careful and taking precautions, she ultimately contracted COVID. While dealing ...