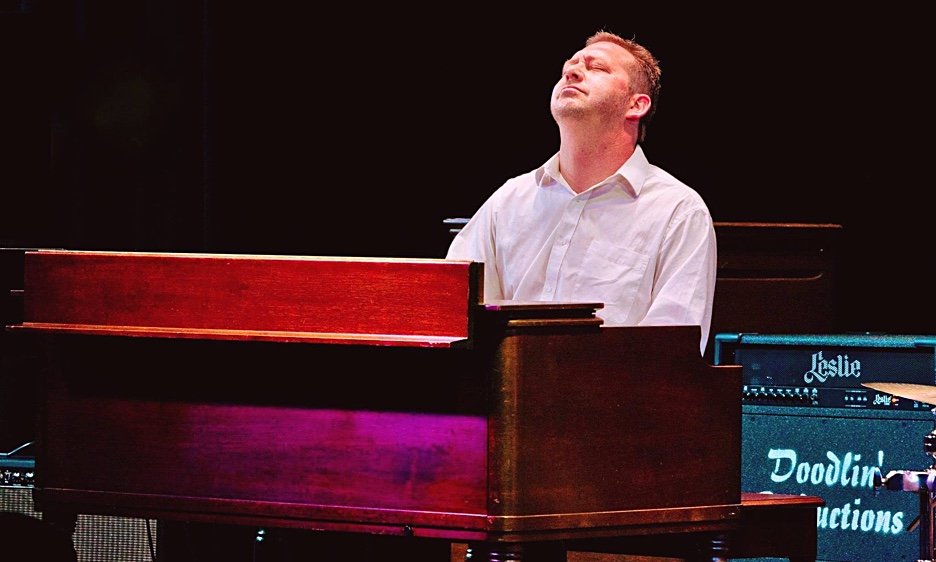 No matter what I felt, Hammond organ was always my voice.
—Pat Bianchi

It may be that young Pat Bianchi had little choice but to follow a career in music. After all, his father and both his grandfathers played professionally in his hometown of Rochester, NY, an area that also produced the likes of the Mangione brothers (Chuck and Gap), pianist Frank Strazzeri, saxophonist Gerry Niewood and drum legend Steve Gadd.

"When I came to music, jazz was probably a given because the grandfathers—Pat Bianchi and Richard Zona, sax and trumpet, respectively—and father Nick Bianchi, a drummer, all worked with swing bands. "Thus, Pat Bianchi grew up with the genre.

He went on to become one of the monster Hammond B3 organists on today's scene. But an unusual aspect of that ascendency is that he started on organ, not taking the usual path of starting on piano at a young age and later discovering the organ and falling in love with it. Piano came later, but organ remained his calling and where he reached the heights, playing with legends like Lou Donaldson, among others. For a long time he has held the organ chair in the Pat Martino trio.

"Since I had showed a lot of interest in music, and keyboards in particular, as a Christmas present when I was 7, I was given a combo organ. It was a knock off of a Hammond B3. A less expensive version. I learned how to play left-hand bass, I learned how to play everything with the right hand, in terms of chords. Basic solos and things like that. Piano didn't come until later."

"There are probably literally a handful of us that started on organ," he notes. Fans of the instrument should be glad. His intense chops, melodic experimentation and sweet swing has propelled him to top B3 gigs and critical acclaim. He leads his own trio as well, which has toured with success, including opening several concerts for Steely Dan this year. The great individual and group sound is evident on his new release,

In the Moment (Savant Records, 2018) has special guests like Joe Locke and Kevin Mahogany. It's a strong collection of great songs that swing provocatively; not died-in-the-wool standards, but songs from the likes of Wayne Shorter, Stevie Wonder, Willie Nelson, Chick Corea and Billy Eckstine.

He is held in such high regard on his instrument that he will be starting an organ degree program in 2020 at Berklee School of Music, from which he graduated.

But it is was in high school that he picked up more on the piano. At times, he would play a synthesizer version of an organ sound. But piano was more common. He enrolled in the Eastman School of Music's preparatory program for piano and music theory and chose to continue studies at Berklee. "I switched to piano for awhile and did a lot of stuff on piano, especially after graduating from Berklee. Then I made the permanent switch back, when I was a resident out in Colorado in 2002-03. I haven't looked back since.

"The love of jazz organ, or Hammond B3, never really left me," says Bianchi. "I would have probably focused on that 100 percent when in school if they offered lessons or even had a B3 that was accessible. But they didn't at the time. No matter what I felt, Hammond organ was always my voice and I knew sooner or later I would go back to the instrument. I love the fact that it is such an expressive instrument. I can think more like a horn player in my right hand. Of course, being able to play bass lines (or comp) behind another soloist is something I love just as much. I feel I interact on a deeper level with the soloists and of course the drummer."

As an organ player growing up, Bianchi didn't gravitate to the old masters, from Jimmy Smith on down—not at first. His transformative moment came in the form of a newer recording.

"When I was 16 years old and knowing about the Hammond, I was given as a Christmas gift: Joey DeFrancesco's Live at the Five Spot. That's what completely turned me around. I was like, 'Alright, I really want to get serious about this instrument in a different way. Really dig in.' That recording really changed my life."

At Berklee, he became friends with the iconic organ player from Philadelphia. DeFrancesco became a mentor.

"There's a lot of things he would show me," recalls Bianchi. "We'd be hanging out. We'd have discussions. Aside from playing on the bandstand with him for a short time. There were music tips, you could say lessons. And a friendship as well. We'd always be talking about organs and taking B3s apart. He'd show me things. He studied all the greats inside and out. He knows them like the back of his hand. It wasn't necessarily formal lessons. It was just, over the years, this constant sharing of information."

Bianchi knew some musicians who had settled in Colorado and decided to give it a try. He became the house pianist at the popular El Chapultepec, a jazz club dating back many years. "You could play seven nights a week, playing only jazz. Making not a huge amount of money, but you could pay your bills," he says. It was on this gig, he decided to switch full-time to organ. The gig was also important because it gave him some important formative experiences.

The club brought in guest soloists on weekends. Bianchi was in his early 20s, playing with people like Red Holloway, Dakota Staton, Conte Candoli and Bud Shank. "That was like my master's degree, being up there with these established cats, night after night kind of getting my butt kicked."

He ended up planting roots there for awhile. He recorded his first album as a leader, East Coast Roots, with Mark Whitfield on guitar and Byron Landham on drums. He also worked with drummer Ralph Peterson Jr. on collaborative projects.

"I wasn't playing anything but jazz. I decided there was no reason to go anywhere else. But in time, as with every city and every scene, things changed a bit. I decided to make the move to New York. I've been here since 2008."

In New York, he joined Lou Donaldson's quartet and after awhile joined Martino's trio. He made more albums under his own name and was featured on many others. He actually did his first gig opening for Steely Dan in 2008 and did a bit more in 2018. In August of this year, he got a call from Donald Fagen for Steely Dan Dates in October and November in New York, Philadelphia and Boston.

"That was a ball to do that. That was a lot of fun. That was more or less a trio, just myself. Paul Bollenbeck played guitar. For scheduling reasons I had different drummers. Jeff 'Tain' Watts did a number of dates. Carmen Introrre did a few dates, as well as Byron.

In the Moment while released in 2018, was actually recorded a couple years ago.

"The entire CD was done in two days. It sat on the shelves for awhile, actually. So many things were going on at the time. I was busy with Pat, traveling and doing other projects. The recording was put on the back burner for a couple of years. Then I decided I wanted to get something out, so I pulled that out and started mixing it, editing it."

It has two drummer, Landham and Intorre. "Carmen and I knew each other as teenagers, me being from Rochester and him from Buffalo. Actually, I'm a few years older. He was a teenager. I'm a huge fan of Byron, with Joey DeFrancesco being one of my influences. Landham has a long history with DeFrancesco. Paul Bollenback and Locke are guests."

Locke, along with DeFrancesco, Martino, Donaldson and guitarist Betty Carter or Art Blakey, where you come through and you learn, then you work your way up the ranks. There is a lot of instant— they say flavor of the month, sometimes. People who are instantly a success without having had the opportunity to come up through other people. So I feel, no matter where my career goes, I'm very lucky to have had the opportunities of 'coming up' as a member of legends and their bands; as a sideman and learning that way."