By Doug Collette
December 28, 2019
Sign in to view read count 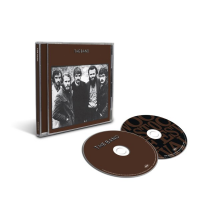 If ever there was an album so complete unto itself it did not call for, but rather forfended, an expanded remaster, The Band's eponymous album of 1969 is it. Yet this double-CD is the second such release and stands on its own, apart from the larger 50th Anniversary Super Deluxe Box Set (Capitol/UMe, 2019). The first came in 2000, after multiple other anthologies containing similar material—To Kingdom Come (Capitol, 1989), Across The Great Divide (Capitol, 1994), and A Musical History (Capitol, 2005)—and this set repeats the bonus tracks from that issue.

Newer material comes in the form of of the iconic group's complete set at the Woodstock festival as well as seven additional studio takes, described by Robbie Robertson in the enclosed twenty-eight page booklet as "'That's us trying to teaching ourselves how to play these songs." The twelve cuts on the formal album more than ever sound like a crystallization of innumerable variations distilled to their essence through the assiduous but good-humored patience displayed by The Band and engineer, multi-instrumentalist and unofficial producer John Simon: distinctly different takes of "Rag Mama Rag" and "Up On Cripple Creek" suggest the malleability of the material, not to mention the versatility of the players involved: vocalist/keyboardist Richard Manuel plays drums at times, while vocalist/drummer Levon Helm picks up a guitar or mandolin on occasion.

An additional credit to Simon on the cover of this package rightly assigns credit and clarifies his collaboration with the group. After helping the Band craft the mysterious and magnificent Music From Big Pink (Capitol, 1968), he helped the quintet set up a studio for themselves on the West coast for the purposes of recording this follow-up. He was an integral part of the creative process that resulted in a seamless piece of work that resonated throughout the culture of its late Sixties and continues to do so today, even (or to some ears, especially) in this gracefully modified form: Bob Clearmountain's remix and Bob Ludwig's subsequent remastering bring a listener closer to the source of the functional, earthy rapport of the performances. And, as much as The Band had an uncommon range of choices in arranging a song like like "Jawbone"—unusual enough in itself with its 6/4 time signature—their discerning efficiency at this point in their career is nowhere more evident than in these original rough mixes of the group in the "Live At Woodstock 1969" cuts offered here.

Somewhat relegated to an undeservedly unsung status over the years (and the litany of reissues), the recognition for Simon's unusually varied contributions is directly in line with how certain tracks from the original dozen, once overshadowed a half-decade ago, have risen to their rightful prominence alongside the likes of "The Night They Drove Old Dixie Down," "Rag Mama Rag" and "Up On Cripple Creek." Where the latter now seem more than a little literal-minded, especially in comparison to the cryptic likes of "The Weight" and "Chest Fever" from the debut album (themselves more than a little derivative of Bob Dylan's surrealism in their oblique lyrics and music), the soulful enduring qualities of cuts such as "The Unfaithful Servant" now sound more palpable than ever.

Likewise, "When You Awake" and "Whispering Pines," to name just two other such cuts, feature lead vocals by the late Rick Danko and Richard Manuel, and were co-authored by the latter with guitarist and chief songwriter Robbie Robertson. The ghostly singing is as unaffected as the arrangements are sparse, like the best of the preceding album, relying more on the human element than au courant style. Likewise, "Rockin' Chair" and the outtake "Get Up Jake" (a harbinger of the formulaic approach to composing Robertson would soon adopt) vividly evoke a history that, romanticized and fundamentally fictional though it may be, nevertheless stands apart from and transcends contemporary trend(s). It is rare indeed, in any genre or style, to hear economy of musicianship as carefully wrought and crafted as these marriages of melody and word.

In an almost eerie fashion, the prose of essayist Anthony DeCurtis mirrors the detached tone of that enigmatic collective image The Band chose to cultivate when embarking upon their own career after elevating their profile by backing Dylan on his riotous world tour of 1966. Diffident in regards to the cult of personality, especially as it applied to their enigmatic group persona, The Band chose to emphasize their musical skills, no less so in the studio than on the stage. The quintet tended to focus on its playing and singing, to the exclusion of any overt stage theatrics, a detached attitude that didn't always stand them in good stead with the less-discerning in their audiences, but one which much more often than not, resulted in the alternately crisp, punchy sounds they parlayed that wet night in upstate New York in roughly a month before The Band came out.

In keeping with their circumspect demeanor, a muffled "Thank You" or two were the only between song repartee the quintet offered an audience that, at least close to the stage, sounds fully conversant with and appreciative of songs from their debut LP such as "Chest Fever." In addition to seven of the eleven songs from the previous year's record, the fivesome include three tunes that would pepper their setlists as they began to tour regularly: "Baby Don't You Do It," "Ain't No More Cane on the Brazos" and the Four Tops' "Loving You Is Sweeter Than Ever" (a fairly regular choice for an encore, here perhaps tinged with a bit of irony mixed with sarcasm). Plus there's a nod to The Basement Tapes (Columbia, 1975) in the form of "Don't Ya Tell Henry;" perhaps offered as riposte to the loudmouth wag who yells "Where's Dylan!?" It is nonetheless of a piece with its surroundings, including two other compositions co-authored with Bob Dylan: "Tears of Rage" (Dylan and Richard Manuel) and "This Wheel's On Fire," (Dylan and Rick Danko), and a rendition of "I Shall Be Released" that The Band refuses to belabor: unlike so many subsequent takes over the ensuing years, it is like most of the eleven numbers, short and to the point.

As a result, this is music, like that which the group recorded in the months just prior, that will not become dated. Its superficially antique, rustic nature constituted no small attraction(s) of contrast, when first appearing in the wake of the psychedelic era and the Summer of Love, and it might also resound in today's high-tech milieu, although perhaps only to a limited cross-section of the mainstream audience. But those intangibles mesh with the other novel content on this two-CD package, including a striking range of images (plus backstories like one to the cover image) culled from Elliott Landy's splendid book The Band Photographs: 1968-1969 (Backbeat, 2015).

Accordingly, this very focused set, perhaps more so than with its larger counterpart, (with its additional and arguably peripheral selling points, like a bonus seven-inch single, 5.1 Surround Sound mix, Blu-ray audio, etc) presents trenchant insight into the working methods of The Band at one of the multiple turning points in the fabled group's history.