Advertise
14
Jazz Near Me 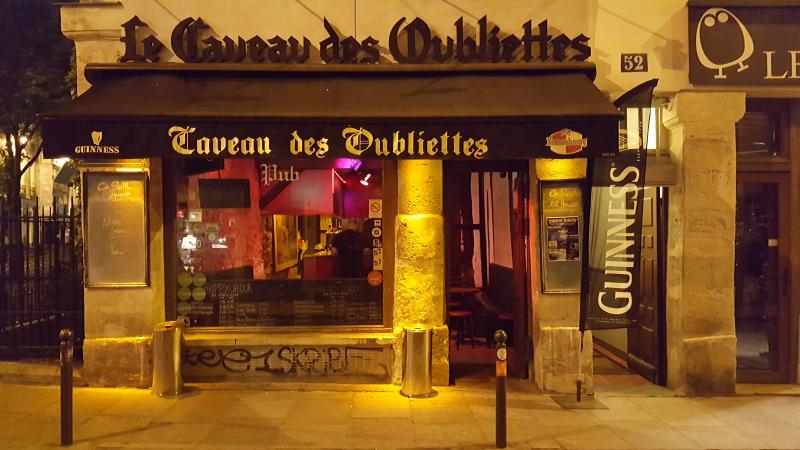 By Patricia Myers
September 2, 2016
Sign in to view read count

Guitarist Django Reinhardt is credited with originating French jam sessions that are still known as “le boeuf” (beef) after he invited other musicians to join in after his paid sets ended.

F. Scott Fitzgerald wrote: "The American in Paris is the best American. It is more fun for an intelligent person to live in an intelligent country. France has only two things toward which we drift as we grow older—intelligence and good manners." And I would add great jazz!

Although many think that much of Paris shuts down in mid-to late-summer, that's not true for most of the 30-some regular jazz clubs, although a few close for two weeks in August, the month when many Parisians are en vacances.

Live jazz performances are abundant in Paris, but this was a new attraction when black soldiers first brought their American-born music to Europe during World War I and again during World War II. All the jazz venues mentioned have baby grand or upright pianos on their stages.

The most vintage dates to 1921 when Le Boeuf sur le Toit opened as a cabaret; it relocated several times and now has a piano bar with jazz concerts scheduled only on Thursdays. This is where guitarist Django Reinhardt is credited with originating French jam sessions that are still known as le boeuf (beef), after he invited other musicians to join in after his paid sets ended. In 1940s, the American term "jam" was created, derived from a word of the 1730s for preserved fruit smashed into jars, reflecting the way after-hours musicians jammed free-form sounds together, rather than just playing written notes of the era's big-band music.

The next eldest of Paris clubs is Caveau de la Huchette, open continuously since 1946 as a nightly venue in the Latin Quarter on the Left Bank. An all-ages swing-dance crowd regularly gathers in the underground club. Every band focuses on the swing, ballads and boogie-woogie of its original era, later adding bebop and Latin rhythms. In July and August, the subterranean performance area (space for 50 to 75) stays fairly cool, although some dancers bring towels and even fresh shirts or blouses. A steep and well-worn stone stairway leads down to bench seating and an elevated stage with an upright piano. I once overheard a young listener say the nightly "floor-show" of dancers looked like the set of an old movie.

New Morning opened in 1981 in north-central Paris with a concert by Art Blakey and the Jazz Messengers performing in this warehouse-like space that seats 200. This has been the largest Paris venue, although shifting in recent years from pure jazz to more varied music, as have most of the longtime jazz festivals around the world.

Two years later, three Paris jazz clubs opened on the same narrow street, rue des Lombards on the Right Bank. Sunset-Sunside opened in 1983 and doubled its space in 2001 by converting its underground restaurant, Sunset, into a second performance room. Jazz is booked nightly in both 50-seat venues that have appetizers menus. Next door is Baiser Salé ("salty kiss"), an upper-level bar with stage that seats 40. Duc des Lombards club was added in 1984 along the same rue, remodeled a few years ago to seat 75 on two-levels with a small-plates menu. Devoted jazz fans soon labeled these clubs la triangle d'or de jazz (the golden triangle of jazz), which it remains three decades later.

One of the newer locales is Cave Du 38 Riv' in the Marais district of Paris that opened in 2007. This narrow, low-ceiling caveau is a two-flights-underground space (42 steps, elevator for the disabled or weak of limb). Local and touring European musicians are booked, as well as jam-session nights that attract younger fans who fill the 30-some low settees and a raised area of high-top tables and stools. Two earlier longtime subterranean jazz boites that closed in the late 1990s were Le Petit Opportun and the Swing Club.

The most elegant locale for jazz, blues and pop music is the spacious lounge of the Hotel Meridien L'Etoile, where I was thrilled several years ago to hear Michel Legrand himself play piano and sing. More compact venues include Le Caveau Des Oubliettes (two tiny jail-themed subterranean rooms) that books mostly blues bands, and Café Universel, a street-level no-cover club favored by Sorbonne students. Also long-term are Café Laurent (piano duos/trios in the lobby bar of the Hotel d'Aubusson), Chez Papa Jazz Club, Swan Bar and Autour de Midi & Minuit. There also are several boat-restaurants anchored on the Seine River that book solo or duo jazz artists on weekends.

As always, the biggest international stars play the largest venues, which one recent summer included concerts at the huge Olympia concert hall by both Diana Krall and Arizona-resident guitarist-vocalist George Benson.

Many clubs schedule tributes (hommages) to jazz legends such as Duke Ellington, Charlie Parker, Thelonious Monk, Django Reinhardt and George Gershwin, performed by American, French and other European musicians. Acoustic groups often perform manouche (gypsy jazz) in small churches and at summer festivals. That style was being performed one sunny afternoon near the Paris city hall (Hotel de Ville) by a duo from a larger ensemble, Swingin' Partout. Guitarist Nicholas Lestoquay and violinist Jeremie Levi-Samson (both classically trained) had attracted an audience by performing swing-style originals that evoked Reinhardt and Stephane Grappelli. As usual, there was a box for donations with albums to purchase, including an eponymous double CD of the quintet performing 20 gypsy-jazz originals.

In addition to the club scene, there are many jazz and/or classical ensembles performing free in the vintage gazebo of the spacious Luxembourg Garden. One concert this summer featured an octet playing jazz from films (Le Jazz Fait Sont Cinema). Outdoor performances also are staged on spring and summer weekends in the Parc Floral (6 euros gate-fee, picnicking with BYOB permitted). The groups are mostly French and Eurozone musicians. The same kind of lineup worked the annual Paris Jazz Festival in late June.

There are numerous piano bars around the city and, in mild weather, musicians perform on bridges and street corners, some even bringing upright pianos on rollers. Radio station TSF-fm (89.9) plays mainstream jazz and blues 24/7 with periodic newscasts and early-evening musician interviews.

To find out who is performing and where, search Jazz Near You: Paris (and download the free app), search Paris Jazz Club, or purchase the weekly Pariscope or L'Officiel des Spectacle magazines (95 centimes each Wednesday). Some clubs also have stacks of the free Paris Jazz Club Agenda and/or LYLO, the latter listing all genres of music. For the best souvenir, I always purchase the two monthly French-language jazz magazines, JAZZman and JAZZ that sometimes include compilation CDs for the price of 6.50 euros ($7).

If I had been able to stay longer, I would have attended the annual Jazz a Villette festival's 12-night agenda in September that features top international stars from the U.S. and Europe in the Cite de la Musique's acoustically acclaimed concert hall.