By Mark Sullivan
September 3, 2016
Sign in to view read count 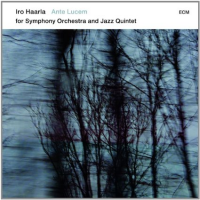 Finnish pianist/harpist/composer Iro Haarla devoted the early part of her career to the music of her then-husband, the late drummer/composer Edward Vesala. On her own she has released two quintet albums on ECM: Northbound (2005) and Vespers (2010). That quintet (with a couple of personnel substitutions) is integrated into an extended composition with symphony orchestra on Ante Lucem. Trumpeter Hayden Powell (in place of Mathias Eick) and saxophonist Trygve Seim are on the front line, joined by double bassist Ulf Krokfors, drummer Mika Kallio (in place of Jon Christensen) and the leader on piano and harp.

"Integrated" is definitely the word. The piece consists of four separate, but linked pieces, the jazz players part of the musical flow with the orchestra. While the quintet is featured, it does not alternate passages with the orchestra as is common in jazz + orchestra projects. This is not a "Concerto for Jazz Quintet and Symphony Orchestra." The opening "Songbird Chapel"is dedicated to Haarla's mother, who was an opera singer. The composer sets the tone with her harp, followed by a haunting melody for saxophone and trumpet which is taken up by the strings. Seim's lyrical saxophone solo marks the first major improvisational contribution from the quintet.

"Persevering With Winter" is about the long winter season in the North, the time of hibernation and a long period of darkness. It opens with ominous orchestral texture, finally broken by Haarla's piano. The rest of the band joins in with melodic material, and the string accompaniment expands to include the full orchestra—finally exploding into a theme which recurs at the close of the piece, a thrilling moment. Seim contributes a lovely obligato solo over the repeat. ..."and the Darkness has not overcome it..." continues the winter theme, the light overcoming the darkness and making the cold disappear. Seim's plaintive solo saxophone opens, joined by Powell's trumpet, then piano and strings. Powell takes center stage (joined by brass and strings) before giving way to a bass solo from Krokfors, then more trumpet with rhythm section—one of the most extended quintet passages in the piece so far. It all finally builds to a triumphant conclusion with quintet and orchestra.

"Ante Lucem -Before Dawn..." brings the set to a close with a piece that the composer says "describes the Passion. It begins on Holy Thursday in the garden of Gethsemane. The piece ends on Easter Monday with the resurrection." But there are no direct references to religious or liturgical music. The movement can be heard just as convincingly as a trip from darkness to light, the struggle that forms the theme for the entire album. Seim's saxophone again takes the lead as a voice calling out in the darkness, and the quintet plays a roiling segment of what sounds like free improvisation depicting a violent scene, made even more intense by orchestral interjections. The final orchestral section is both calm and triumphant, befitting the subject.

Ante Lucem is a moving experience, rich and majestic. It will surely reward multiple listenings. The piece was commissioned by the Norrlands Opera Symphony Orchestra and its leader Marco Feklistoff and premiered at the Umeå Jazz Festival in October 2012. This album was recorded in the same concert hall (the Concert Hall of NorrlandsOperan) on the following day.

Songbird Chapel; Persevering with Winter; ...and the Darkness has not overcome it...; Ante Lucem - Before Dawn.