Cover a show or event, profile a venue, extol the virtues of a local jazz organization or write about the jazz scene in your home town.

Jason Marsalis Quartet SOUTH Philadelphia, PA October 5, 2015 It is difficult under normal circumstances for the youngest sibling in a family. When that family is named Marsalis then the dynamic changes and there exists a whole slew of standards and expectations. That is the environment that Jason Marsalis has had to deal with over the course of his life. Of course it doesn't help that his older brothers, trumpeter Wynton and ...

The Cookers Birdland New York, NY September 17, 2016 On a warm night in New York City The Cookers took the stage. This appearance at Birdland marked the release of their latest CD, The Call of the Wild and Peaceful Heart (Smoke Session Records, 2016). Each member of the front line is a jazz stalwart, and leaders of their own bands. Billy Harper is old enough to have played with Art Blakey's Jazz ...

F. Scott Fitzgerald wrote: “The American in Paris is the best American. It is more fun for an intelligent person to live in an intelligent country. France has only two things toward which we drift as we grow older--intelligence and good manners." And I would add great jazz! Although many think that much of jny: Paris shuts down in mid-to late-summer, that's not true for most of the 30-some regular jazz clubs, although a few close for two ... 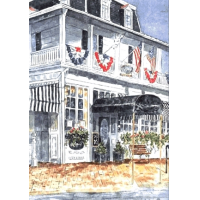 Cape May, New Jersey is one of the oldest resort towns in the United States. Dating back to the Victorian Era, it has, over the past few decades hosted jazz festivals in April and November. The Merion Inn, on Decatur Street, is one of the oldest bar/restaurants in Cape May. It is a place for adults who value a good (real) martini, good food and good vibes created by top-notch jazz pianists playing daily from 5 PM, and ...

Stepping into the Green Lady Lounge feels like stepping back into the 1940s. Dim lighting, red walls, red drapes and faux-classic art lining the walls all build a classic ambiance. This must be what a jazz club in jny: Kansas City used to feel like. That's all by design. It's owner John Scott's vision or, as he puts it, his point of view. “It's the club's responsibility to get the patrons in," Scott explains. “When I ...

At Mara's... Sweet, Savory and Seasoned with Jazz

On a Friday night at Mara's Café and Bakery in Berkeley Heights, you can satisfy several cravings at once: Answer the dinner bell, soothe a sweet tooth and hear eight New Jersey locals wail at some not-so-standard jazz tunes. The octet is Jazz Lab 6+2, which began as a sextet, then added two more players. These are serious and gifted multi-instrumentalists who burn to share what they've concocted in their laboratory. Jackson Liu, Mara's owner, gave them free rein over ...