The Young Lizards: Our Modern Lifestyle 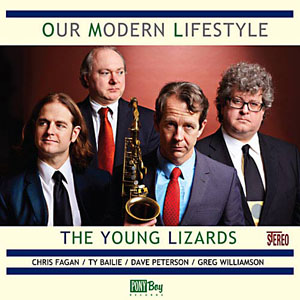 The organ trio, once a focal point of soul-drenched jazz in the heyday of such elder statesmen as Jimmy Smith, Richard "Groove" Holmes, Brother Jack McDuff, Jimmy McGriff, Charles Earland, Don Patterson and others, hasn't been nearly as prominent in recent years as the ranks of virtuosic organists (Joey DeFrancesco notwithstanding) have thinned. Nevertheless, the organ remains a persuasive jazz instrument, capable of creating uncommon qualities and textures that are implausible in its absence. When a horn is added, as on this quartet date by the Washington state-based Young Lizards, the mood is even more expansive and colorful.

The organist on Our Modern Lifestyle is Ty Bailie, and even though he may lack the bombast or firepower of a DeFrancesco or his predecessors, he fits snugly into this framework, lending strong support to alto saxophonist Chris Fagan while blending seamlessly with guitarist Dave Peterson and drummer Greg Williamson. The quartet is clearly of one mind, and no one vies to aim the spotlight in his direction. The emphasis, in other words, is on purposeful teamwork.

As for the music, it consists of engaging compositions by Joe Henderson ("Punjab," "Y Ya La Quiero"), Jaco Pastorius ("Three Views of a Secret"), Woody Shaw ("Katrina Ballerina"), John Coltrane ("Mister Day"), Clare Fischer ("Morning"), drummer Williamson ("Short Mojo") and the standard "While My Lady Sleeps." Tempos are generally moderate, and there's not a barn-burner in the bunch ("La Quiero" comes closest). "Lady" and "Morning," each of which runs for more than ten minutes, are the most sweet-tempered items on the menu. "Punjab" is snappy in spots, giving Bailie a chance to display his chops, which prove to be more than adequate. Fagan and Peterson generate maximum mileage from their solo excursions, while Williamson ensures a steady and dependable backdrop.

For those who miss the transcendent sound of the jazz organ, especially in an evocative context, Our Modern Lifestyle should give rise to enchanting memories as it provides hours of listening pleasure.

About The Young Lizards