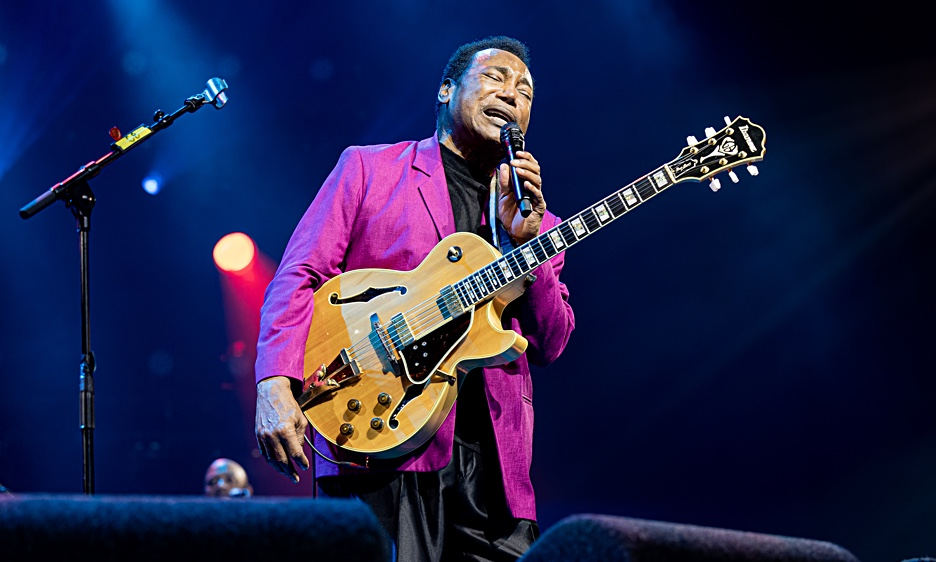 The post-pandemic, new North Sea normal seemed much the same as before, except the stakes were higher than usual due to economic recovery issues and continued uncertainty regarding Covid-19 resurgence.

While the global entertainment sector bloomed back into big summer business on many musical fronts, there was no single weekend event under the sometimes misleading "jazz festival" designation that could match Rotterdam's North Sea Jazz Festival for proven star power en masse or volume. While featuring multiple artists from pop, blues, or world music there remained an abundance of talent who clearly fit an accurate jazz-based profile, like the James Brandon Lewis Quintet, Christian McBride and Inside Straight, Steve Coleman and Five Elements, Joe Lovano, Dave Douglas, and iconic artist-in-residence Herbie Hancock.

In the evolution of such jazz-based gatherings, NSJF has maintained a reputation at the genre's apex, maintaining massive programs matched in star power by only a handful of other musical galas. Considering that those few comparable programs typically extend over a longer duration than the three-day North Sea period, Rotterdam's extravaganza is likely the biggest weekend in jazz, as verified by multiple overflowing venues.

Therein lay the issue. North Sea Jazz was potentially a high-risk location for new coronavirus strains. While the Netherlands has a very high percentage of vaccinated people, the government had previously been very cautious regarding any easing of quarantine rules, but in the weeks before North Sea all restrictions were abolished, even as cases increased dramatically in neighboring Germany. Apparently the priority now is a thundering herd immunity.

People in Holland knew the virus was resurging well before Mick Jagger's positive test caused The Rolling Stones to cancel an Amsterdam show, and North Sea festival days hold around eight hours of live music, with much of the time spent shoulder to shoulder with thousands of attendees who cheered or sung along throughout.

No one seemed to care. Any resulting hesitation from ticket holders was basically non-existent. People lined up early to get into the main Ahoy complex, and they lined up early on the interior floors to ensure getting in to their favorite shows. It turned out that people obviously missed live music, so much so that a sense of joy was palpable all day long.

Prior to the usual Friday opening, a new tradition may have begun with John Legend's well-received performance on Thursday, which included a warm up act and progressed for a full concert duration around 90 minutes as opposed to more typical festival type shows of approximately an hour.

Legend got a specifically designated background banner of the familiar North Sea logo that read "Special Edition," and he lived up to his personalized marquee, earning pronounced recognition from a full house that proved to be promotional gold as one of the summer's places to be seen (or to post from) moments. He connected with the crowd, sharing anecdotes like getting a chance to work with Lauren Hill while he was a student at the University of Pennsylvania. Whether he was on solo piano singing "All of Me" or crooning with a full band behind him, Legend delighted the large swarm and provided a great kick-off for the weekend, igniting the social media reaction that seems more commercially vital than ever.

A large percentage of the roving audience's shifting attention on Friday seemed focused on Diana Ross, who's appearance became one of those iconic situations in which the actual performance was secondary to the superstar's presence. Considering Ross' rarely equaled contribution, along with the Supremes; to musical culture and history such status is well deserved, and solid versions of hits like "Upside Down" were just icing on the cake as she took the stage.

Ross' vocal on "I'm Coming Out" was, to be kind, uneven but her backup vocalists and support band did the gig's necessary heavy lifting with bright, consistent smiles that turned songs like "Why Do Fools Fall in Love?" into a triumphant celebration. The packed hall of what appeared to be well over 10,000 fans kept smiling too, and swayed under nostalgia's spell.

There was a noticeable letdown in crowd reaction during "If the World Just Danced" from a new album, but Ross maintained her energy more than enough to keep the crowd engaged. Another new song, "Thank You," made a good fist impression and proved Ross isn't just resting on her laurels. As backdrop images projected familiar images of Ross' glory days it was impossible to deny the presence of greatness. No expiration date applies to baby love, and the crowd was more than willing to ignore vocal misfires. At this point in time, the songs carry the singer.

George Benson is another North Sea fan favorite and his Friday afternoon set demonstrated why, getting the first full day of music off to a very sweet start. Multiple choices and proof of the program's depth came immediately, as Gary Bartz joined the seven-piece London band Maisha in some old school ethos and shared the same time slot as Benson.

On most festival days there are at least ten concerts happening at the same time. Many peoples' choices seem to end up based on proximity as much as preference. Thus began the inevitable routine most North Sea attendees experience for at least part of their visit, that of the rotating concerts ride. At least in the case of Bartz and Benson the venues were practically side by side so fans could check out a bit of each.

Those sets were immediately followed by overlapping orchestral formats featuring Lizz Wright with the Rotterdam Philharmonic and Louis Cole with the Metropole Orchestra. Wright's soulful serenade, with sparkling piano accompaniment by Kenny Banks on "The Nearness of You" by Norah Jones was from a different planet than Cole's zany, techno-tinged compositions carried out by band members in skeleton suits, but the performances shared common traits of excellence and emotion.

As usual, the host country Netherlands was represented well by local players like Eric Vloeimans, Mo van der Does, or Hans Dulfer, while the amount of global talent from places like Africa (including Peter Somuah, Zoe Modiga) or Cuba (Cimafunk, Eliades Ochoa) offered a wide range of perspective.

There were only a handful of masks to be seen anywhere in the sprawling complex. Though the mood remained light, people's eyes got a different look if someone started coughing next to them. Trust only goes so far in a sardine can.

The Netherlands' official statement on the national health website concluded... "coronavirus has not gone away. People will continue to get infected and become ill. The government is therefore monitoring the situation closely and will take action as appropriate, based on how the situation develops."

As has been the case with Covid-19 all along, only time will tell, and as the week after the festival progressed, a growing number of people in online public forums stated that they'd tested positive for the virus after attending North Sea. Beside the audience, some of the most heralded performers fell into the most vulnerable categories, like enduring elder states persons Ms. Ross, Benson, Hancock, and Nile Rodgers, while icons like Dulfer or Archie Shepp, both in their 80s, might have been at even more considerable risk.

So the primary saga of North Sea Jazz's 2022 reopening does not come from the many great concerts, it comes from the overflowing crowds that lived for the moment as they pushed their way into arenas, undeterred in adding themselves to what by all likelihood was the biggest super-spreader event in jazz. Here's wishing good health to all.

The concluding notes of Gregory Porter's Friday night show sent the crowd home happily but there was really no way to tell what subsequent concerns, if any, might arise. For all those who felt the experience was well worth it, there were many more in agreement and the animated, sold out crowds returned in force all weekend. Social distance meant shoulder to shoulder, amidst throngs at almost every show or concession stand where the obvious prevailing sentiment was on with the show, damn the pandemic, full speed ahead.