Eric Vloeimans (1963), born in the Netherlands, is regarded as one of Europe’s best trumpet players. He shows an extraordinary talent for playing original music with an outstanding quality. On his cd's Vloeimans prefers to record original compositions. As a composer he does not feel restricted to one particular style, but at the same time, he has managed to create a language of his own. His writing is fresh and creative, yet not without feel and respect for the tradition. The great musical talent and the expressive power of the music of Eric Vloeimans have been honoured by winning the Dutch Edison Award four times, the Boy Edgar Award, the Elly Ameling oeuvre prize and the prestigious Bird Award at the North Sea Jazz Festival. Eric Vloeimans has been active in a wide variety of ensembles all over the years

Two For The Road- 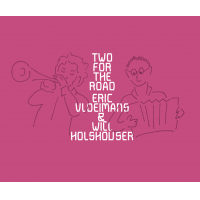 26
Article: Out and About: The Super Fans

North Sea Jazz Festival Ahoy Rotterdam Rotterdam, The Netherlands July 8-10, 2022 The post-pandemic, new North Sea normal seemed much the same as before, except the stakes were higher than usual due to economic recovery issues and continued uncertainty regarding Covid-19 resurgence. While the global entertainment sector bloomed ...

Musette Explosion is a trio featuring Will Holshouser (accordion), Matt Munisteri (guitar) and Marcus Rojas (tuba) which gives a very New York twist to a quintessentially Parisian art-form like Musette music. Together they bring this genre to new places through virtuosic improvisation and original pieces, sonic surprises and adventurous playing, shot through with a sense of ...

Clarinetist and composer Kinan Azmeh is internationally renowned for his intense, spirited performances. The Syrian born musician uses music to transcend cultural barriers, performing with projects as diverse as Yo-Yo Ma's Silk Road Ensemble, the New York Philharmonic and Dutch trumpeter Eric Vloeimans. In 2006 he formed the CityBand, a four-piece band that strikes a balance ...

TRPTK, an independent new music label based in the Netherlands, produces hi-res recordings with astonishingly realistic sound quality. TRPTK's catalogue of jazz and new music erases the boundaries of musical genres, and pursues a commonality of purpose that overrides differences in cultural and national backgrounds. Æon Trio: Elegy Elegy, performed by the jazz ensemble ...