Who Was Jane Fielding? 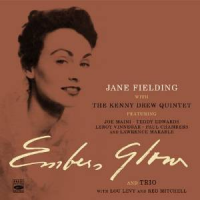 slideshow
Back in 2012, I posted on Jane Fielding, a husky-voiced vocalist who recorded just two albums—Introducing Jane Fielding (1955) and Embers Glow (1956)—along with two songs performed on Bobby Troup's Stars of Jazz in 1957. Then she disappeared. At the end of the post, I originally asked Ms. Fielding to reach out to me.

In February I heard from Jane's daughter, Tina. Here's what she said in her email...

“I just found the wonderful story you wrote about my Mom. Thank you so much! She passed away 15 years ago in Palm Springs, Calif. She would have been so thrilled to know she still lives on!"

Tina then sent along photos and a bio that Jane Fielding wrote and was published in the newsletter of the facility where she was staying in Palm Springs:

“Mary Jane Cranston (a.k.a. Jane Fielding) is a farm girl from Lansdale, Pa., who from infancy was exposed to music. She listened for hours as her aunt played classical piano and taught her to sing her very first song, Skylark, at age four. Jane sang alto in school chorus, and at 15 she was hired by a local band to play campus dances. On her first job, professional musicians told her she wasn't a singer but a musician who sings jazz, to which she replied, 'Oh, is that what I'm doing?'

“Jane appeared with the Willis Conover Orchestra composed of Woody Herman's musicians on off-road sabbatical, and she can still scat-sing two of the late great Earl Swope's jazz riffs. One night, Lucky Millinder caught her by surprise in the wings and asked her to sing with his orchestra on stage of the Howard Theatre in Washington, DC., which she now recalls as a musical highlight of her career.

“Jane moved with her family and siblings to Los Angeles, where she was soon sitting in at legendary jazz clubs Tiffany's, Sardi's and Jazz City. She recorded on the Jazz West label, including an album with Lou Levy and Red Mitchell. She also starred with jazz greats Shorty Rogers, the Lighthouse All-Stars, Art Pepper's group, Bud Shank, Pete Jolly and on television with Bobby Troup's Stars of Jazz, featuring Oscar Peterson. Jane married 'Jungle' Jim Cranston of the movies and soon began to lend her unique interpretive style of singing to lullabies with some moonlighting in church choir. In the late 1980s, she sang in musical theater and later performed gospel music.

“She moved to Palm Springs in 1989, and in December 1996 she had a stroke. Twelve weeks later she was wheeled into the Stroke Activity Center in Palm Springs and asked Mort Marks, a resident, if he had a cane she could use. Jane has been walking ever since. She says, 'I am eternally grateful for the blessing of this facility, for its gracious caring donors and cheerful staff and volunteers who have opened its doors and their heart to help me and my friends on our way to recovery. I am most thankful for the chance the staff has given me to try to sing again at our fund raising evenings. Now my goal is to try out for local musical theater once I'm up to snuff.

“I was pretty young when she was singing. I do remember she performed at a concert in Pasadena. I think it was at the Pasadena Auditorium. At any rate, Bobby Troup was the pianist and Julie London also sang there. Jane once took me to a place where a jazz group was playing. It was in Los Angeles somewhere. At any rate Zoot Simms and Maynard Ferguson were there. It's great you are doing this. Your mom would be (is) very happy."