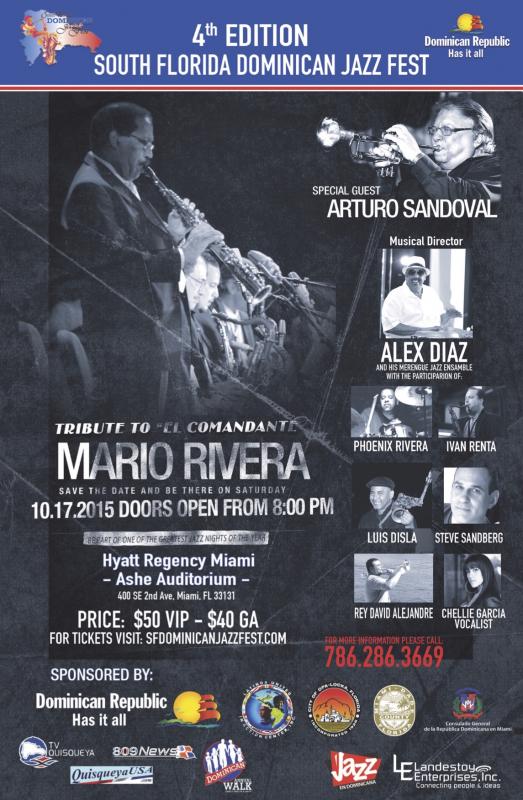 slideshow
In October 2012, Landestoy Enterprises presented a completely new and exiting concept from the Dominican Republic: The South Florida Dominican Jazz Fest. A multicultural event that brought to Florida the best Jazz currently being made by musicians in the Dominican Republic as well as Dominicans living in the United States. October of this year is just around the corner and Miami is preparing itself for the 4th versión of this event.

The level of success of the presentations have been such, that both the City of Miami, via its Mayor; as well as the Miami-Dade County, via its Director, officially declared October 17th as “South Florida Dominican Jazz Fest Day."

Miami has witnessed, with sold out performances, jazz proposals from the land that gave Merengue & Bachata to the rest of the world. Top notch presentations have been delivered in various genres of Jazz, in fusions with the rich native rhythms of the Dominican Republic. The main goal of the event organizers of introducing Dominican jazz to South Florida, has by far exceeded expectations. And, since the end of last year's event, calls and e-mails have not stopped—asking about the 2015 festival.

On Saturday, October 17th, for one complete evening, jazz lovers from Miami and throughout the State of Florida will once again be able to enjoy as impressive musicians hit the stage to pay a musical tribute to one of jazz's legends—the dominican multi-instrumentalist Mario Rivera—El Comandante. It will be an exciting and electrifying evening of jazz!

The South Florida Dominican Jazz Fest 2015 is dedicated to one of the glories of not only Dominican Jazz, but Jazz & Latin Jazz as well; multi-instrumentalist Mario Rivera! The musicians, under the direction of Alex Diaz, played with or for Mario during their careers and will be on stage to honor their Maestro. These include his son Phoenix Rivera and world renown Arturo Sandoval.

Alex Diaz and his Merengue Jazz Ensemble. This group is made up of very well recognised jazz musicians from New York and Miami, under the direction of Dominican percussionist Alex Diaz will deliver a musical tribute to the great Mario Rivera. Alex has played with Tito Puente, Mario Rivera, Mario Bauza, Dizzy Gillespie and many others. The format results in a fine and elegant mix of jazz, latin jazz and Dominican rhythms such as merengue, pambiche, palos, gaga. Alex leads a hot band composed of Mario´s son, Phoenix on drums; sax players Ivan Renta and Luis Disla; pianist Steve Sandberg; Rey David Alejandre on trombone, bassist Manny Patino: Tony Reyes on tambora; vocalist Chellie G. and the Guest of Honor, world renown trumpeter Arturo Sandoval.

Mario Rivera was a tremendous and special human being, musician, composer and arranger. Especially blessed to be able to play to perfection more than 15 instruments, of all these he is best remembered for being a great saxophonist. Rivera dominated the “straight- ahead" jazz and Latin Jazz, Salsa and many other genres; he was at a premium and popular as a musician and came to form part of the orchestras of Tito Puente, Machito, Tito Rodriguez, Dizzy Gillespie, Chico O'Farrilll, Mario Bauza, Eddie Palmieri, George Coleman, and many more. He led two of his own: “Salsa Refugees" and “The Mario Rivera Sextet," with the latter recording the album “El Comandante" where he successfully experimented with “Merengue Jazz."

About the Hyatt Regency Miami

The venue chosen for the event is Ashe Auditorium - Hyatt Regency Miami—Hotel on South East Second Avenue in Miami—whose specialty are high level events which will make for a beautiful evening of jazz in the ideal scenario for this concert.