Born in Ponce, Puerto Rico and raised in Coamo, Puerto Rico, Ivan Renta has become one of the premiere saxophonists in the Jazz, Latin Jazz and Latin Music Industry. His ability to adapt to any musical situation has landed him on stage at many of the world’s most prestigious venues and music festivals. His credentials include recordings and performances with artists such as Tito Puente, Wynton Marsalis, Eddie Palmieri, Willie Colon, Ron Carter, The Afro Latin Jazz Orchestra, Marc Anthony, Jennifer Lopez, Jimmy Heath, Ray Barreto, The Vanguard Jazz Orchestra and Bebo Valdez, to name a few. Mr. Renta has collaborated on three Grammy Award winning and numerous Grammy nominated recordings.

Ivan began playing Alto Sax at the age of 13 in his hometown of Coamo, Puerto Rico Soon after that he moved to NYC to attend the "New School Jazz and Contemporary Music Program". While at the New School, Ivan studied with Jazz legends such as Reggie Workman, Gary Dial, George Garzone, Buster Williams to name a few. In 2000 Ivan got a call to participate on the Tito Puente & Eddie Palmieri recording "Masterpiece", winner of multiple Grammys and what turned out to be Puente's last album.

After recording “Masterpiece”, Ivan became a member of Eddie Palmieri’s Latin Jazz Ensemble and Salsa Band and accepted an invitation made to him by pianist/composer/arranger Arturo O’Farrill to join the Jazz at the Lincoln Center’s Afro Latin Jazz Orchestra. After working with Mr. Palmieri for approximately six years, he proceeded to become the saxophonist for Salsa legend Willie Colon’s Orchestra. He has also collaborated extensively with trombonist Luis Bonilla and percussionist Chembo Cornel.

“Take off a Musical Odyssey” is Ivan’s first solo recording project. Laced with outstanding performances by some of Ivan’s friends (who happen to be some of the world’s finest musicians), this recording takes us through the musical journey that he has experienced, as he made his epic journey through the New York and world music scene. Five of the eight compositions on this recording were authored by Ivan and he also did all the arrangements. This dynamic project highlights Ivan’s intense energy, creativity and passion for music.

Has been on 3 Grammy winning recordings and 5 Grammy Nominated recordings. Was on soundtrack for "Chico & Rita", a musical animated film, which was nominated for an Academy Award for Best Animated Film. 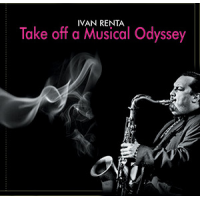 All About Jazz musician pages are maintained by musicians, publicists and trusted members like you. Interested? Tell us why you would like to improve the Ivan Renta musician page.