Tito Rodriguez - vocalist, percussionist, composer, bandleader (1923 - 1973) Tito Rodriguez in the 1950’s through ‘60’s was a smooth voiced Latin nightclub crooner, who reigned over the radio and record charts geared toward the Puerto Rican community both in New York and on the island, where his music is still very popular. His popularity then grew broader and reached into all of Latin America. His distinct, resonant voice floated crystal-clear above the dense sound of his large orchestra, which was the best in its day. He is still revered as an uptempo sonero and a romantic singer who influenced the wave of salsa singers that followed. Pablo “Tito” Rodriguez was born on 4 January 1923, in Santurce, Puerto Rico

This week we start with the Motor City and veteran bassist Robert Hurst with musif off his latest CD Black Current Jam. From there, we get in some Modern Jazz Quartet, Kris Bowers off the “Green Book" Soundtrack and the great Steve Davis with music from his new album Correlations. We profile Kansas City trumpeter Alex ... 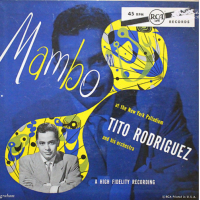 From 1974 to the early 1980s, disco ruled the clubs. But in the late 1940s and 1950s, the dance that was significantly more pervasive and influential was the mambo. From the start, the mambo's popularity was based on the imagery the music stirred up. The mambo was the music of elite Havana vacations and exotic drinks ...

In October 2012, Landestoy Enterprises presented a completely new and exiting concept from the Dominican Republic: The South Florida Dominican Jazz Fest. A multicultural event that brought to Florida the best Jazz currently being made by musicians in the Dominican Republic as well as Dominicans living in the United States. October of this year is just ...

Long Live Boogaloo captures rare and sometimes underground Latin boogaloo, traditional Cuban music shot up like steroids with James Brown and other hard-driving R&B sounds, which emerged from Spanish Harlem in the 1960s, compiled by producer Bobby Marin for Secret Stash.Even if this Boogaloo can sometimes sounds anachronistic, it still sounds vibrant and alive. ...

In the mid 1960s Latin teenagers in New York's Spanish Harlem neighborhood created a new style of music called Latin boogaloo. The sound was a mix of the Cuban music they grew up with and American R&B like James Brown and Hank Ballard. It quickly caught on and before long the young purveyors of this new ...