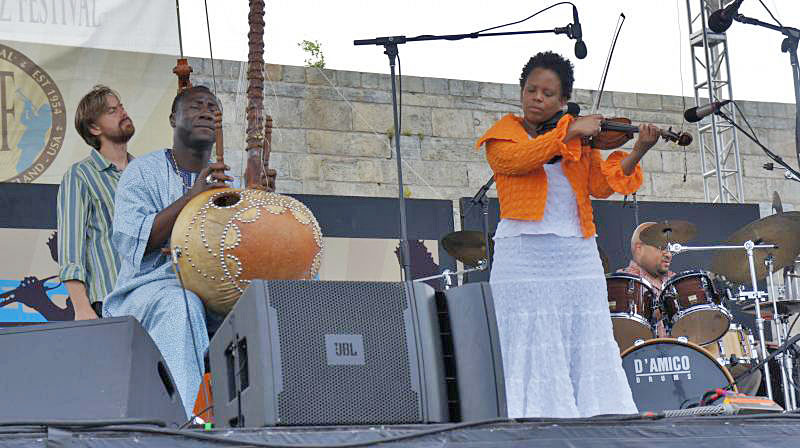 On a hazy Saturday that started hot and grew more humid, violin and accordion walked a melody as Regina Carter's Reverse Thread opened the main stage at the 2011 Newport Jazz Festival. Will Holshouser's accordion puffed sounds inspired by zydeco and percussionist Alvester Garnet hinted at African-inspired rhythms. The band opened with the slow-moving tempo of "Juru Nana/God Be With You," followed by the more upbeat "Artistiya."

"N'Tteri," meaning friendship, featured a kora solo by Vacouba Sissoko. Sissoko captivated the crowd as he wove polyrhythmic tonalities on the West African instrument containing more than 20 strings. Carter's violin, which layered and embellished the sound, soared on this beautiful piece.

The waterfront environment that makes up the festival contained three stages, each of which had five acts perform throughout the day. Within the walls of the stone fort that has hosted the festival for more than five decades, the Quad Stage aired the sounds of Mostly Other People Do the Killing. Trumpet, alto sax, bass, and electronic drums combined dizzying, avant-garde thoughts with doses of ragtime swag. Kevin Shea contributed a drum solo that ranged from a standard jazz cymbal ride to varied electronic pitches, swells, and chirps. 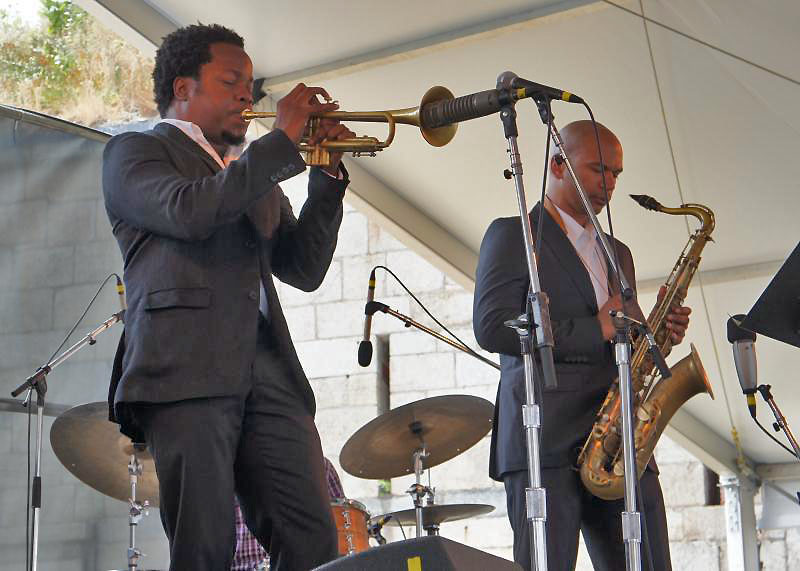 A short walk away, a lone, piercing trumpet note rippled through the air, and quickly melted into flurried statements at the Harbor Stage. The Ambrose Akinmusire Quintet ushered in its set with "Confessions to My Unborn Daughter." Akinmusire called out a trumpet figure four times. Drummer Justin Brown, bassist Harish Raughavan and pianist Sam Harris joined in. Tenor saxophonist Walter Smith III spoke in a quiet, dour tone. Smith and Akinmusire mirrored a melody line and exchanged ideas of sound—smeared notes climbed to a scream, morphed into solos, and then fell back down to simmer.

"Thank you so much," Akinmusire said as he introduced the band members. "We don't have much time up here, so I'm just going to continue with the music." The set also featured "J," an original scored by Raughavan, "Regret No More" and "With Love." The performance drew from the adept rhythm section. With skill and flexibility, they constantly pushed the music, procuring dense sounds, rich fills, and wondrous embellishments, amid a torrent of horn lines.

Fast, slow, and heavy, Eddie Palmieri's Latin Jazz Band delivered rhythms so deep and robust, you could almost taste papaya. During this set, the sun sneaked out from beneath its blanket of haze. The crowd grew—spilling onto the bed of dry grass that made up the grounds about the Quad Stage. Around and between melodic phrasings, horns spit sound into the air and chided with comical bursts. Some people danced the cha cha to "Piccadillo" and others screamed with enthusiasm to "Vanilla Extract" and "Comparsa"—good thing the Del's Frozen Lemonade stand was nearby—some peeps looked like they needed it! 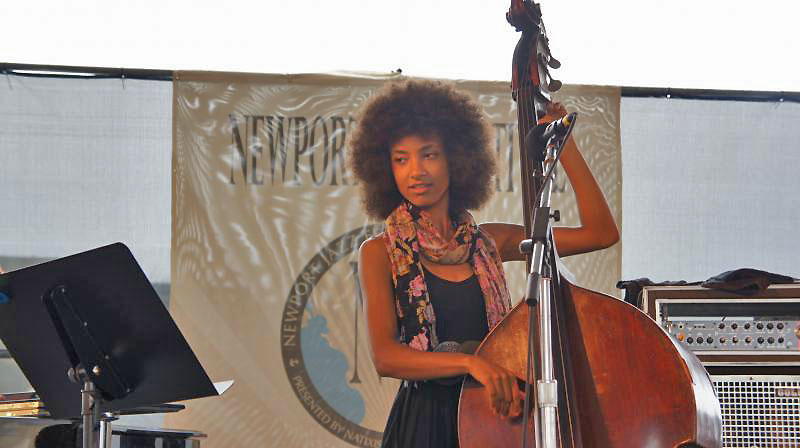 The mid-day mark made for arduous decisions. On the Main Stage, Wynton Marsalis cast his classic sound, peppered by a Cajun butter, as he opened with song "#8." From the Harbor Stage, the churchified sounds of Joey DeFrancesco's organ trio preached "V&G" and "Blues in 3" to receptive parishioners. Simultaneously, Trombone Shorty & Orleans Avenue could be heard on the Quad Stage. Arguably, Newport hasn't seen a high-energy act of this magnitude since the 2008 Soulive set or the 2009 James Carter gig. The rich chocolaty grooves of this hard and swinging band had the audience standing and moving. If you knew where to look, you could even catch Esperanza Spalding shakin' it! The horn players stepped, twirled, and swayed, in a stage routine that harkened back to the height of the Motown era. First to last, each note was a party.

From the opening alto sax riff of "January 18," Steve Coleman's Five Elements drew an audience of enthusiastic ears. Jen Shyu sang in tones and syllables, while David Virelles comped on the piano. At times, the group appeared to utilize an improvisational approach of playing individual notes that collectively gave rise to melody. Other times, more traditional lines, scales, and chord phrasings were employed. Coleman, who was a central figure in the M-Base concept, continues to strive for new sounds and ideas in music.

The closing set on the Harbor Stage saw the young alto saxophonist Grace Kelly leading her quintet. Piano, drums, and bass, ushered in the opening measures. Kelly and trumpeter Jason Palmer worked the same melody on their horns. Palmer rang a low, repetitive note, that resonated with an almost rubbery tone, and then faded into silence. Drummer Bill Goodwin knocked at his kit and carried the groove. Kelly bent a note on her horn and then twisted a series of sounds into a melody line, leading the band through "Just The Way You Look Tonight." Light, airy, and crisp, this group evoked the classic sound that has become the Newport tradition. "I can't tell you how excited I am to be back at Newport," Kelly said to the audience. 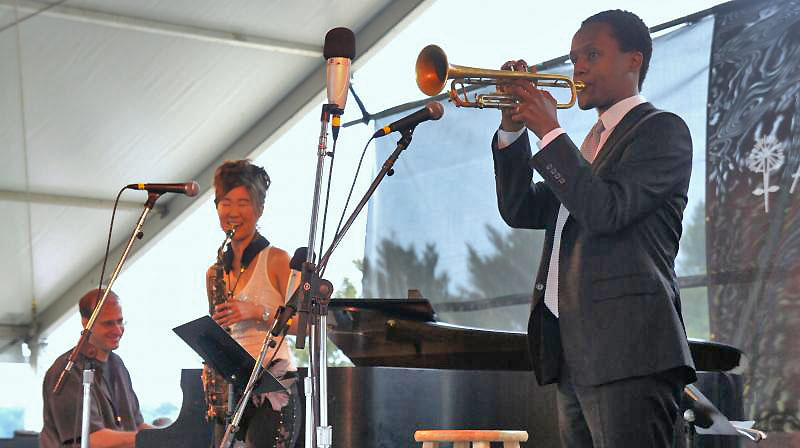 During the set, she brought special guest and fellow altoist Phil Woods to the stage. Kelly described Woods as "One of my inspirations and a legend," and named her latest recording, The Man With The Hat (Pazz, 2011), to honor him.

As Kelly's quintet closed the Harbor Stage, pianist and composer Randy Weston's African Rhythms Trio was poised on the Quad stage—Alex Blake on upright bass and Neil Clarke on African percussion. As its name implies, the trio thrived upon rhythm, introducing rich textures of sound and melody around the groove. The set included the piano solo "African Lady," a journey across the burning sands with "3 Pyramids And A Sphinx," and "High Fly."

Blake brought a unique rhythmic and highly percussive quality to his bass playing. He aggressively plucked, strummed, and smacked a multitude of individual notes that created harmonic figures and introduced melody from the resounding depths of the instrument. At times he sang in a scat-like trance, entrancing the audience.

The milky haze that had greeted this Newport morning silently vanished during the day. Evening brought cooling temperatures and the scent of the salted air. Blake strummed at the bass while Weston danced lyrical piano notes around Clarke's percussive drumming. The tempo slowed. Seagulls crooned, accompanying the final measures of the music. African chants were the last sounds heard as the music was swallowed into the sea. Quiet would fall upon the stage, lone but for the notes of the gulls who had reached shore against a graying sky. Today, a potential storm paid no mind. Tomorrow would be an entirely different matter.