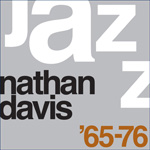 The concept of a "Best Of" album seems like it should be set aside for those musicians who have entered the popular consciousness to the degree that a sampler disc would be an easy sell. In jazz, canonical artists like trumpeter Miles Davis, saxophonist John Coltrane, bandleader Duke Ellington and pianist Thelonious Monk have seen the "Best Of" and "Greatest Hits" treatment several times over. Of course, such a sampling of their oeuvre is necessarily barely a scratch on the sheen of each artist's career.

The UK's Jazzman label assembled this collection of reedman-composer Nathan Davis' music from an entirely different angle. Davis' music isn't well-known despite a career that started in earnest in the early 1960s, and his dates as a leader have been scattered over myriad labels in very small print runs—only a few have been reissued and originals are out of the range for even deep-pocketed collectors. The Best of Nathan Davis 1965-1976 gives a strong sampling of cuts from ten records Davis led in the years after he first hit the European scene until the 1970s, when his status as a full professor at the University of Pittsburgh precluded constant recording.

Backtracking a little, Davis was born in 1937 in Kansas City, Kansas and attended the University of Kansas in Lawrence before shipping off to military service in Germany in 1960. After being discharged, he stayed on in Berlin and subsequently Paris, where he befriended and formed a co-operative band with reed player Eric Dolphy. Upon Dolphy's passing, Davis continued the ensemble and employed young trumpeter Woody Shaw as a regular front-line partner. In addition to a brief and undocumented stint in the Jazz Messengers, he also worked with drummers Kenny Clarke and Art Taylor, pianists Francy Boland, Rene Urtreger and Mal Waldron, trumpeter Benny Bailey and numerous others during this fertile period.

As Dolphy was helpful in getting Davis significant work upon relocating to Europe, so Davis returned the favor to Shaw and fellow Jayhawker, trumpeter Carmell Jones. Jones appeared on Davis' second date as a leader, The Hip Walk (Saba, 1965), with the Clarke-Boland Band rhythm section of Boland, Clarke and bassist Jimmy Woode. "B's Blues" starts off the collection in a vein of loose, dry hard-bop, and were it not for the leader's soprano, might seem firmly rooted in a late 1950s or early 1960s approach to modern jazz. Davis runs on tart, eastern-tinged scales that, while fully within the chordal structure that Boland sets up, somehow keen towards an edge not traditionally represented in hard bop. Jones' fat blasts are hot and make an interesting foil for the leader's slightly-unhinged approach, both players splaying out wide even as they dart amongst one another.

Woody Shaw's "Zoltan," excised from Davis' first LP as a leader, Happy Girl (Saba), finds the pair in company with Woode, drummer Billy Brooks and Larry Young on piano, rather than his customary organ. Young and Shaw recorded the same tune on Unity for Blue Note a year prior. Beginning as a Kodaly-inspired folk march, the rhythm section jumps into a knotty, swirling backbeat as tenor and trumpet navigate Shaw's theme. The trumpeter takes several choruses on the tune, punching flywheel highs and surefooted, strong mid-range blowing that lays a perfect ground for throaty and slightly dissonant tenor whinnies at the tune's midpoint before a brief piano flourish and fours with Brooks bring it home.

The latter half of the 1960s found Davis leading a pair of quartet dates for the Polydor and Edici labels, both with Art Taylor in the drums chair and either Hampton Hawes or Mal Waldron on piano and bassists Jimmy Garrison and Jimmy Woode. Rules of Freedom (Polydor, 1967) was particularly interesting for its inclusion of Hawes, who adds a strangely curt rhapsodic quality to proceedings that otherwise recall a particularly North African-inspired Coltrane. "A5" finds Davis' soprano parsing slight, behind-the-beat phrases with incision and delicacy, Taylor and Garrison knitting a dense carpet underneath and around the leader and Hawes' dusky hunt-and-peck comping.

Davis formed his own label, Tomorrow International, in Pittsburgh in the mid-1970s after an unfortunate brush in the early 1970s with local rock label Segue virtually buried his excellent Makatuka LP (his first upon returning to the states). The records on Tomorrow International, Suite for Dr. Martin Luther King, Jr. and If, accentuate a funkier approach to writing and one which resulted in Davis' popularity among the club-jazz and deejay set. "Atlanta Walk," from the former session, seems crazily sped-up, especially considering the massive brass writing that opens the tune. Davis and trombonist Nelson Harrison take clipped solos over a rumbling and top-heavy beat, a two-trumpet volley leading into pianist Frank Cunimundo's brief, flowery statement. The suite was commissioned by Gulf Oil, oddly, and its performance resulted in death threats from an African-American group in resistance to the oil company. Despite external pressures, the recording of the suite came off excellently, and also included biographical narration from former Pittsburgh University vice provost, Donald Henderson.

If is small-group electric funk, a slightly saccharine shock in comparison to the extended modal backdrops of earlier sessions; nevertheless, Davis' staccato and vocal flute is in full display at the outset of the slinky "New Orleans." A tight backbeat melded with conga, rubbery electric bass and George Caldwell's florid, gospelized piano is an excellent setting for Davis, having one foot in jazz tradition and the other in something decidedly "else." Davis, after all, has always been a searcher and while his music maintains clear roots in post-bop, his playing and writing encompass North African and Indian music, the avant-garde and funk. For a career and life that spans so much music and a vast geography, it's hard to imagine one compilation doing Nathan Davis justice. Jazzman Records has done him proud.