Benny Bailey was born on August 13, 1925 in Cleveland, Ohio. His father was an amateur saxophonist and his mother played the piano. After some experience on piano and flute early in his career, he switched to the trumpet and studied at the Cleveland Conservatory of Music. He started his career in the Jay McShann orchestra. In the forties and fifties he played with some of the best-known jazz musicians, like Lionel Hampton, Dizzy Gillespie and Quincy Jones. Quincy Jones, who wrote the song “Meet Benny Bailey,” admired Bailey for his marvelous breath control and remarkable range. According to Jones, Bailey had the most perfect technique.

Benny Bailey spent over half of his life in Europe which maybe accounts why he has recorded relatively few albums under his own name, but recorded with Dexter Gordon, Les McCann, Charlie Rouse, and the Kenny Clarke - Francy Boland Big Band, with whom he toured and recorded with until 1973.

He first went to Europe with Dizzy Gillespie's band in 1948 and soon after returned there with Lionel Hampton to stay in Sweden until 1959. After a short stateside sojourn in 1960 during which he recorded an album for Candid, “Big Brass,” the Quincy Jones band brought him back to Europe where he stayed more or less permanently - working as a soloist with different orchestras or leading his own groups in various countries.

In Europe Bailey made a notable appearance at the Montreux Jazz Festival. In 1969 he joined pianist Les McCann and saxophonist Eddie Harris for their show, the performance was recorded and released as “Swiss Movement” for Atlantic. This was a major hit, and the song “Compared to What,” was a huge crossover success that year.

In 1980 he returned to the US and co-founded the Upper Manhattan Jazz Society with Charlie Rouse and also worked with Mal Waldron's quintet. In 1983 he went back to Europe for good and resided in Amsterdam. He toured with the Paris Reunion Band, and he was a frequent guest with Europe's leading salsa orchestra, the Conexion Latina.

Bailey recorded a memorable tribute to Louis Armstrong titled “The Satchmo Legacy,” in 2000. Staying active till the end, he was supposed to perform at the North Sea Jazz Festival in July 2005, but following the news of his death this concert was changed to a "Tribute to Benny Bailey". 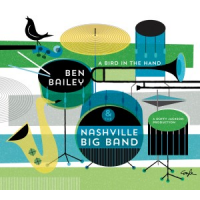 A Bird in the Hand

Serenade To A Planet

All About Jazz musician pages are maintained by musicians, publicists and trusted members like you. Interested? Tell us why you would like to improve the Benny Bailey musician page.