Like a lavish banquet, one can't indulge in the whole spread, but only savor favorites. That was the case with the lineup at the 56th annual Monterey Jazz Festival which ran at the Monterey Fairgrounds in Northern California.

Topping the fare were Wayne Shorter, Diana Krall and Joe Lovano. For three days, from afternoon to late evening, great jazz was performed by the best from around the world in six venues. Additionally, veteran saxophonist Lou Donaldson was there for an appearance on his 86th birthday. To be noted, most big-name acts heard in the 7,000 capacity arena also played in the other more comfortable spots.

Gregory Porter, the popular Grammy nominated singer got things off at the large outdoor Jimmy Lyons Stage. Dressed in dapper garb, he put on a lively show for the cheering audience, even jumping high in the air, doing the splits, coming down on twos.

In the intimate Night Club, the tall, imposing Carmen Lundy was in command instantly, her soaring voice filling the room. She performed originals, beginning with the urgent "Prayer for Peace," followed by a very affective "Star Eyes," her voice ascending while holding long sustained notes of yearning. She truly shared the stage with pianist Patrice Rushen whose fingers were all over the keyboard in a flurry as she was generously given opportunities to excel in her solos.

Later, Orchestra Buena Vista from Cuba performed at the Arena. The exotic rhythm was catmint (catnip) to the audience, and the orchestra's hot music had the crowd dancing and celebrating.

As always here, Saturday afternoon was dedicated to the blues. This year The Relatives arrived from Texas. Formed in the seventies, the eight members recently got back together to sing their brand of gospel blues to the boisterous crowd. They reached their peak with "Do the Hokey Pokey." 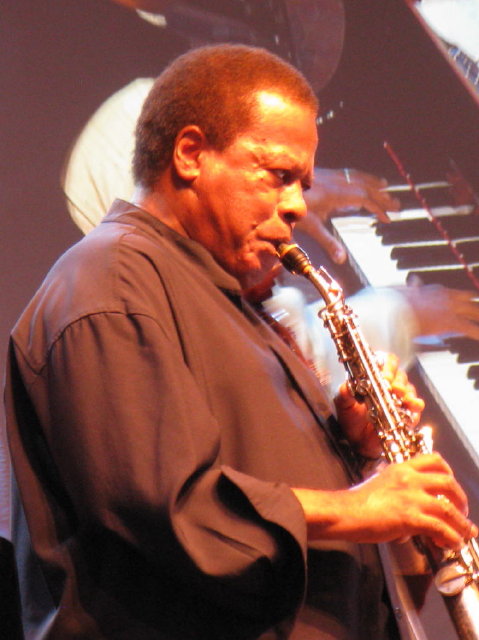 Next up, singer-guitarist George Benson got a big response playing amazing guitar and singing mostly favorites in his stylized manner. He showed he could get down with the blues in "Moody's Mood For Love" and "I've Never Been in Love." As a critic once said, "There is a satisfying kind of oneness between Benson and his guitar."

Leading off on Lyons Stage was the Joe Lovano-Dave Douglas Sound Prints Quintet. The feature of the set was the performance of two commission pieces by Shorter. From the get-go, their bristling interplay was evident. They softened a bit for Shorter's beautiful "Sail Into Sunset." Undoubtedly one of jazz's best groups, much of its charged presence came from the explosive bursts of drummer Joey Baron, setting a course for the next improvisational interlude. 2013's Artist in Residence, Lovano was seemingly everywhere—with two appearances of Sound Prints, fronting the Us Five, group, soloing with the New Generation Jazz Orchestra and taking the Downbeat Blindfold Test.

Bobby McFerrin and his SpiritYouAll show on Lyons Stage went back to the leader's roots in the church. His daughter Madison, too, was featured at his side with his seven-piece group. The old hymn "Swing Low Sweet Chariot" never sounded so good. As usual, he sang standards with his marvelous voice in falsetto or scat—rapidly veering into modal registers, performing both the main melody and the accompanying parts of songs. Percussion came from a grunt and by tapping his chest. Don't try this at home.

Those concerned with the future of jazz should be heartened by the Monterey Jazz Festival's New Generation Jazz Orchestra. After 56 years, this program has become identified with raising prospects for young players in high school and college. Sunday's band was the result of competition among students throughout the country. The best survived and had been molded into a sharp, precision unit led by Paul Condos. The band's outstanding set started with a sparkling modern arrangement of "Sunny Side of the Street." Later, Lovano joined in on a pair—a rhythmic "Shades of Naples" and a soaring version of "The Peacock." In other venues throughout the afternoon, prize winning college and high school groups played. As well, there was a contingent from the Brubeck Institute to hear.

Next up, pianist Bob James and sax star David Sanborn were re-united. Playing less smooth pop here, the longtime buddies went back into mainstream, even adding a little funky blues. Best was their allusion to "Take Five." Drummer Steve Gadd was the backbone this p.m., hoisting the set on his shoulders and running with it.

Shorter's 80th Birthday tribute was given on Lyon's Stage The accolades could have also been given to his group of premiere musicians who have been together for 13 years—pianist Danilo Pérez, bassist John Patitucci, and drummer Brian Blade. Their creative cohesiveness is palpable, and the trio was often huddled together in center stage with Shorter off to the side. The rhythm section would churn the creative mix with Shorter coming in for short on-target bursts with his soprano sax. 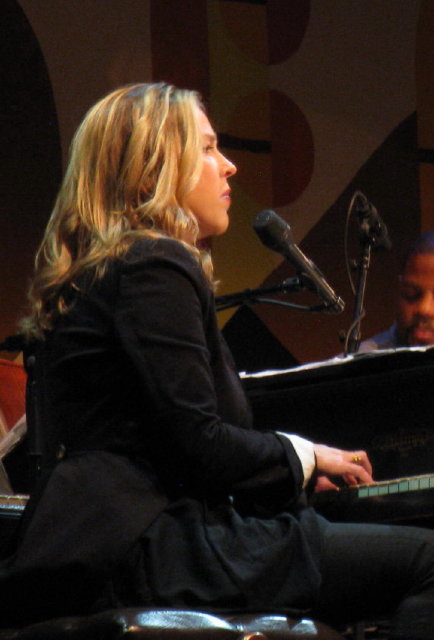 Diana Krall proved why she is the best and getting mellower with age like a Billie Holiday blues. Her session was nothing but eclectic, much of it an homage to singers going back to the forties. She put her imprimatur on such tunes as Fats Waller's spirited lament, "I'm Gonna Sit Right Down and Write Myself a Letter" and Irving Berlin's graceful "Let's Face the Music and Dance."

She looked back on sad rain songs—the teary "Just Like A Butterfly" and the cheery "Let It Rain," along with Green Day's sad-wistful "Boulevard of Broken Dreams." A funny segment when she said she felt "peckish" and hilariously went to Nat Cole's "The Frim Fram Sauce." Bing Crosby, Bob Dylan, and Tom Waits also had their day, all of it delivered by Krall with impeccable skill and understanding of every genre.

Uri Caineon piano built all-encompassing walls of sound, with his group John Herbert on bass and Charles Penn on drums, doing the framework and masonry. Picassoesque in his use of dissonance and atonality, Caine gave what fans on hand were there to appreciate. He is a Philadelphian working in the New York and east coast scene and it was great to finally see him out here on the west coast.

Orrin Evans on piano lived up to the praise for his release, ..."It Was Beauty" (Criss Cross Jazz, 2013). Evans' trio operates as one and includes bassist Eric Revis and drummer Donald Edwards. With the dignity called for, they stately played Revis' oft-recorded "Black Elk Speaks." Evans' group reminds of Bill Evans' with its impeccable interplay—no note seemingly un-responded to. His style, though, is more assertive as crescendos build to explosions. His sly wit was apparent when he said he was going to play an old popular standard. And, in so many words, he challenged us to try to name it. Midway the title jumped out—"Autumn Leaves."

The Berklee College Global Jazz Ambassadors was not on my must-see list, but as Fats Waller might say, "One never knows, do one." On Saturday, my broken tailbone was aching from sitting on the hard metal Arena chairs. To revive my back, I decided to go to the Gallery where there were two overstuffed sofas near the spectator entrance. Soon, while thus sitting, I heard music wafting out the entrance. Excellent jazz was being played by a small group as people filed into seats. This stream of spectators was constant and the room was soon full, even overflowing. A long line was out the door. The attraction was the Berklee College unit. I peeked in and was gratified to see this sextet doing "on-the-cusp" arrangements. I left to a wonderful version of Thelonious Monk's "Little Rootie Tootie." Serendipity for sure.

One of the things festival goers surely look forward to is the variety of foods available. There is never any need to leave the grounds. It's all there and delicious from Ghanian chicken and salmon, to Western barbecue, to Indian fare and fried artichokes, peach and berry cobblers. Along the "shopping mall," the Macy's booth featured cosmetic makeovers, and other stalls sold jewelry, ceramics, scarves, skirts and even shutters. One can shop to a beat here.