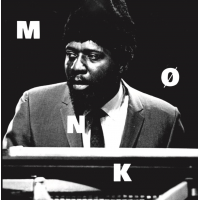 Summer 2018 has seen the release of previously unknown recordings by two giants of mid-twentieth century jazz. First we had John Coltrane's Both Directions At Once: The Lost Album (Impulse!), and now Thelonious Monk's live album Mønk. Both discs were made in 1963. The breathless hyperbole which greeted the Coltrane was unjustified, if predictable, but the album is nonetheless a valuable addition to the archive. The Monk is, quite simply, among the pianist's strongest quartet recordings.

Mønk was recorded by the Danish Broadcasting Corporation at Copenhagen's Odd Fellow concert hall on 5 March 1963 and aired four days later. The story goes that the original broadcast-tape was found by a record producer in a skip in the city some 20 years ago. Gut instinct suggests there may be a little more to the story. But whatever. Complete provenance or not, the tape was recently acquired by the quality-first vinyl-led London record label, remastering and cutting studio Gearbox Records, and its release is approved by Monk's estate.

Gearbox, which was founded by record collector and Blue Note aficionado Darrel Sheinman in 2009, has done a magnificent, all-analogue, audio-upcycling job. The sound is flawless, packing a real punch and—in a triumph of good taste that other labels releasing similar discoveries should emulate—is rendered in the original mono rather than faux stereo.

The band that Monk brought to Copenhagen is in fierce form. It had been together since 1960. Tenor saxophonist Charlie Rouse joined Monk in 1959, bassist John Ore and drummer Frankie Dunlop in 1960. Rouse stayed until 1970, Ore and Dunlop until mid 1963 and late 1964 respectively. The group recorded two studio albums for Columbia before splitting—Monk's breakout disc and label debut, Monk's Dream, and Criss-Cross (both released 1963).

Aside from Monk's relatively restrained solo, "Body And Soul," the music on Mønk is full throated, stomping and hard swinging. Even "I'm Getting Sentimental Over You," after a wistful introduction, is up-tempo and attacking, as are the Monk originals, "Bye-Ya," "Nutty" and "Monk's Dream." Dunlop, whose background was in big bands, drives all before him but is, of course, pushing at an open door with Monk, who was congenitally unable not to swing. The same is true of Rouse, which must be one reason why Monk kept him in his bands for over a decade. Today, Rouse is remembered without the glamour which is attached to two of Monk's other saxophonist alumni, Coltrane and Sonny Rollins, who were undoubtedly more innovatory players. But of all Monk's saxophonists, Rouse was the best fit, a devotee who wholly inhabited the music rather than co-existing alongside it.

Gearbox is building up a stellar catalogue of archive releases. It is also the platform for London's most edge-of-your-seat young jazz group, the semi-free Binker & Moses, featuring tenor saxophonist Binker Golding and drummer Moses Boyd. Binker & Moses' three albums—Dem Ones (2015), Journey To The Mountain Of Forever (2017) and Alive In The East? (2018)—have all been recorded for Gearbox. The label is doing jazz-past and jazz-present proud.

Side A: Bye-Ya; Nutty. Side B: I'm Getting Sentimental Over You; Body and Soul; Monk's Dream.