By Ian Patterson
November 12, 2015
Sign in to view read count
Though his recording career dates back to the early 1960s, Zimbabwe-born arranger, composer and musician Michael Gibbs hasn't always been as prolific as a leader as he might have been. Five albums in the first half the 1970 represented his most industrious period of creativity, as teaching, television and film work and arranging for a surprisingly wide range of artists—from Marianne Faithful to Joni Mitchell and from Mahavishnu Orchestra to Pat Metheny—absorbed much of his time over the next three decades.

Now in his late seventies, the much-respected, ever-youthful Gibbs seems to have found a second wind. Back in the Days (Cuneiform, 2012) kick-started his busiest period of recording in forty years, with several albums as leader and collaborations with Norma Winstone and Nguyen Le following one after the other.

The simultaneous release in 2015 of a brace of albums on the Cuneiform label shows two sides of Gibbs artistry: Play A Bill Frisell Set List features Bill Frisell and the NDR Bigband interpreting a career-spanning selection of the Baltimore guitarist's tunes, as arranged by Gibbs; In My View—again with the NDR Bigband—presents Gibbs' striking original compositions and fresh arrangements of pieces by a number jazz heavyweights. Taken together, these two releases represent a high point in Gibb's colorful musical trajectory 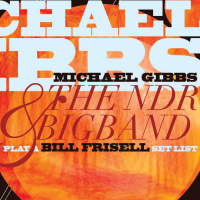 Although Bill Frisell has recorded in big band settings before—notably with Michael Gibbs on Big Music (Verve, 1989)—this outing with the NDR Bigband represents Bill Frisell's first as featured soloist throughout. And solo he does aplenty, on every track in fact, which will surely delight fans of the more jazz-oriented Frisell. Gibbs first came onto Frisell's radar when the then teenage guitarist caught Gary Burton at Red Rocks in 1968. Burton's music, arranged by Gibbs, caught Frisell's ear and less than a decade later Frisell was taking classes with Gibbs at Berklee. The two have played together intermittently ever since.

Gibb's association with the NDR goes back even longer and their close-knit relationship is felt in these vibrant performances of Frisell originals and tunes typical of a Frisell set list on any given day. From the sumptuous ballad "Throughout" from Frisell's debut as leader In Line (ECM, 1983) to the majestic orchestral treatment of "On the Lookout/Far Away" from Big Sur (Okeh, 2013) the selection—chosen by Gibbs—pretty much spans Frisell's trajectory as leader.

It can have been no easy task choosing a Frisell set-list that represents the guitarist's voluminous, electric discography but Gibbs' nine selections—recorded at the Überjazz Festival on 26 October 2013—are a good indication of both Frisell's influences and of his originality. The racing Charlie Christian-esque "Benny's Bugle"—which Frisell recorded with Eyvind Kang and Rudy Royston on Beautiful Dreamers (Savoy 2010)—is a straight-ahead nod to the guitarist's bop roots. "Subconcious-Lee" sees Frisell at his scintillating, exploratory best on the Lee Konitz standard. Konitz and Frisell have collaborated over long years—most recently on a 2015 Nordic tour with Jakob Bro and Thomas Morgan—and much of the veteran saxophonist's lyrical understatement and probing sense of adventure have rubbed off on Frisell.

There's a simpatico duo rendition between Frisell and guest drummer Jeff Ballard of Thelonious Monk's "Misterioso" and the two are in exuberant form on "Freddy's Step." Other highlights include Gibbs' swaggering treatment of Gil Evans "Las Vegas Tango," a blues-drenched, New Orleans influenced "Monica Jane" and an anthemic, uplifting version of The Beatles "You've Got To Hide Your Love Away," which Frisell recorded on his John Lennon tribute All We Are Saying (Savoy, 2011).

Apart from Frisell, who is in truly expansive form throughout, Christof Lauer, Fiete Felsch and Ingolf Burkhardt are notable among the featured soloists of the NDR Bigband. However, the overriding success of Play a Bill Frisell Set List lies in Gibbs' harmonically rich, athletic arrangements that bring out the best in both the NDR Bigband and Frisell for sixty enthralling minutes. Likewise, the ensemble and Frisell bring out the very best in the indefatigable Gibbs. 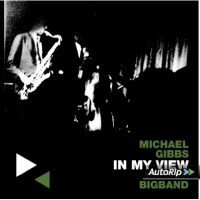 With In My View, and forty years after first working with the NDR Bigband, Zimbabwe-born arranger, composer and musician Michael Gibbs returns with one of his most personal statements. Roughly divided between originals and arrangements of compositions by Ron Carter, Ornette Coleman, Thelonious Monk and Carla Bley, the NDR Bigband is joined by guest drummers Gene Calderazzo and Adam Nussbaum in what surely ranks as a definitive entry in Gibbs' discography to date.

Gibbs' compositions explore strikingly different terrain. The cinematic grandeur of "'Tis As It Should Be" seduces with layers of call and response, whereas the dramatic "As A Matter of Fact" builds from guitarist Sandra Hempel and pianist Vladyslav Sendecki's simple yet hypnotic mantra. The cajon-driven, horns-fired "Spanish Sketch" evokes Gil Evans—Gibb's main influence—but as Gibbs revealed in an interview with All About Jazz the inspiration came from Paco de Lucia, whom Gibbs was listening to in the wake of the guitarist's death in February 2014. The melodically defined, harmonically rich "So That's That," by contrast, is an energetic feature for tenor saxophonists Lutz Buchner, Christof Lauer and Frank Delle.

Gibbs leverages emotional nuance from the ranks of the NDR Bigband on the brooding "Ida Lupino"—Carla Bley's 1964 homage to the actress and pioneering director; Gibbs tightens the reins on the ensemble for Buchner's slowly snaking clarinet solo and Sendecki's measured yet unshackled response. Tenor player Cristof Lauer is at the heart of Ron Carter's noirish "Mood," and in general, Gibbs' strength lies as much in the weight he attributes individual voices as in the balance he strikes between the interweaving ensemble sections.

Some of Gibbs and the NDR Bigband's greatest fire is reserved for Thelonious Monk's "Misterioso" —full of exotic colors and rhythmic contrasts—and Ornette Coleman's bluesy "Ramblin," a straight-ahead workout featuring multiple soloists, of which Hempel and bassist Ingmar Heller's—the latter embellishing Charlie Haden's solo on the original recording—are standouts. A lush, bluesy arrangement of Gordon Jenkin's "Goodbye" -a show-stopper for Benny Goodman—makes for a captivating closing statement from Gibbs and the NDR Bigband.

Tracks: Throughout; Las Vegas Tango: Subsconscious Lee; On The Lookout/Far Away; Misterioso; Monica Jane; You've Got To Hide Your Love Away; Benny's Bugle; Freddy's Step.

Tracks: 'Tis As It Should Be; As A Matter Of Fact; Ida Lupino; Spanish Sketch; Mood; Misterioso; Ramblin'; So That's That; Goodbye.