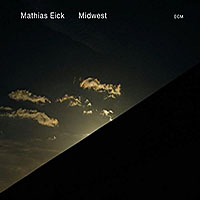 Having first emerged on ECM Records, garnering significant attention for his work with fellow Norwegian, guitarist Jacob Young (2004's Evening Falls), and Finish pianist/harpist Iro Haarla (2006's Northbound), it seemed only a matter of time before trumpeter Mathias Eick would get the opportunity to start releasing albums of his own for the label. But if the trumpeter's first two ECM releases—2008's The Door, an all-acoustic quartet affair, and the larger-casted 2011 follow-up, Skala—became increasing electric (and electrifying) in live performances including Stavanger, Norway's 2008 Mai Jazz festival and Ottawa, Canada's 2012 TD Ottawa Jazz Festival, neither could prepare fans of the lyrically charged trumpeter for Midwest.

While interviewing Eick for the liner notes to '94-'14—a triple-vinyl box celebrating Norway's impossible-to-categorize Jaga Jazzist, with whom the trumpeter played until last year when, after spending fifteen years with the group, he left to focus more on his own music and his growing family—he revealed that Midwest would be a significant departure from his music of the last few years. And while it's true that this album—inspired by Eick's fascination with the American Midwest—is, indeed a departure in its wholly acoustic context and a Norwegian interpretation of Midwestern Americana, there's no mistaking Eick's warm tone, soft vibrato and predilection for melodies both melancholic and heartfelt.

The addition of Gjermund Larsen, a young musician gaining significant ground in his native Norway as a modernist-leaning traditionalist on violin and Hardanger fiddle—and, with his participation since 2007's The Zoo is Far (ECM), international attention as a member of pianist Christian Wallumrod's ongoing ensemble—lends Eick's quintet plenty of the credibility required to give Midwest its folkloric flavor. In addition to the return of the ever-versatile Balke on piano, the album also includes the similarly broad-minded Mats Eilertsen, a bassist increasingly well-known to ECM fans for his work with everyone from Jacob Young and Wolfert Brederode to The Source and Tord Gustavsen. Helge Norbakken, a busy Norwegian percussionist whose work with Balke's Magnetic North Orchestra, Batagraf and the keyboardist/composer's sadly overlooked Siwan (ECM, 2009)—in addition to trumpeter Jon Hassell's extraordinary Last night the moon came dropping its clothes in the street (ECM, 2009)—has long delved into the world of folk music with artists like singer Mari Boine, using his strange hybrid concoction of "real" percussion instruments and found materials like wheel rims to create both pulse and color.

And so, with Midwest, Eick makes a fundamental shift in direction away from the increasing use of electronics he himself employed along with electric bass and synths, to a more fully organic sound that makes it an album filled with the suggestion of broad expanses; instead of the more craggy, barren Norwegian terrains, however, Midwest's intrinsic imagery is that of mile upon mile of farmland and softer landscapes. But what may be the most revealing quality of the album is that, while there are thousands of miles between the folk traditions of Norway and middle America, in the end there is far more shared than one might think.

The chemistry of this quintet is also surprising...or, perhaps not; Norway is a small country, and while some of the members of this group may not have played together before, that they'd encountered each other in their travels is a certainty. It's rare—and refreshing—to hear Balke outside the context of his own projects, like Magnetic North Orchestra, Batagraf, Siwan and the collaborative Jøkleba; unencumbered by the demands of leadership (or, in the case of Jøkleba, collaborative leadership), he's free to be "just" a pianist, and in the less abstruse context of Eick's music, with its more conventional—but no less distinctive and attractive—forms, Balke delivers solos that are more immediate and emphatic in their adherence to singable melodies and appealing voicings than his own work usually affords. Eilertsen rarely solos, but as ever, his support is never less than perfect, with intuition honed in a career now breaching the two-decade mark and a tone for which many bassists would be happy to give up a body part. That he works so well with a percussionist as unique and unusual as Norbakken only speaks to both musicians' quick ability to forge empathic bonds; and the clear understanding that all of Eick's band mates have with the Norwegian folk tradition has undeniably helped in their ability to get deeper into a music that, while redolent of Midwestern American landscapes, is still something else...and some more.

The Door may have been Eick's coming out party as a leader, but by its release in 2008 he'd already clocked up dozens of sessions (beyond his ECM dates) as a band member or guest, and so while his own conception as a leader had yet to form, his skill as a trumpeter was already well-developed. And while he doesn't play any of them on this record, his acumen on a multitude of instruments—in Jaga Jazzist, for example, adding double bass, keyboards and vibraphone to the mix (and that's not the full extent of his multi-instrumental capabilities)—has clearly helped him conceive projects with other instruments in mind. With Larsen a strong front line foil and, at times, contrapuntal partner, the combination of trumpet and violin creates a most pleasing sound that lends the album much of its specific personality.

Eick's most well-conceived and mature outing yet, Midwest comfortably sits alongside The Door and Skala while, at the same time, suggesting change in the air for this young trumpeter, now in his mid-thirties. The engagement of his quintet is deeper; the interaction more profound. With Eick's career on a relatively linear and upward trajectory, his decision to turn to a more acoustic setting turns out to be a good one, as the purity of his tone and the perfection of his musical choices are left bare for all to hear. There are plenty of fine trumpeters in the world, but Eick's own place in it stands distinctive, as he continues, with albums like Midwest, to mine music of a more decidedly lyrical and accessible nature, even as he turns to a distant destination located across a vast ocean and thousands of miles of land for his inspiration.