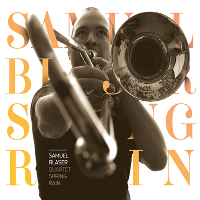 The session comprises a dozen tunes split between originals and covers; Blaser composed six and co-wrote one with Lossing, while the other five pieces (three by Giuffre and two by Carla Bley) all feature prominently on 1961, ECM's celebrated 1992 reissue of The Jimmy Giuffre 3's seminal Verve albums Fusion and Thesis, from '61.

A sophisticated combination of chamber-like austerity, simmering free improvisation and bluesy swing, this subtly eclectic collection elicits the sort of unfettered, genre-defying creativity Giuffre himself pioneered over half a century ago. Blaser's conservatory training and abiding interest in the improvisational traditions of early Baroque music finds concordance with Giuffre's own ideology, making him an ideal interpreter of the master's oeuvre.

The prevailing mood of the program is impressionistic and thus reminiscent of Giuffre's groundbreaking neo-classical efforts. The band's attentive listening and considered interplay imbue the proceedings with a probing, introspective air, as revealed on the opener, a ruminative interpretation of "Cry Want" that showcases the leader's plaintive refrains underscored by Lossing's pensive acoustic filigrees.

The brooding "Missing Mark Suetterlyn" follows, demonstrating the group's stylistic versatility with a roiling bitches brew of electro-acoustic tonalities, recalling the Dark Prince's amplified experiments of the early '70s. "The First Snow" ventures even further afield with a riotous tour-de-force for Lossing, whose blistering call-and-response interplay across multiple keyboards conjures a virtual white-out.

The sonorous tone of Blaser's lyrical phrasing and expressive multiphonics is a unifying element throughout, whether instigating the jaunty swing of "Temporarily" or investing Bley's regal ballad "Jesus Maria" with tangible emotion. Dedicated to Izumi Uchida, Blaser's late manager, Spring Rain is a heartfelt ode, imaginative tribute, and most importantly, in the eternal words of Duke Ellington, "beyond category."