Marina Crouse At The Sound Room 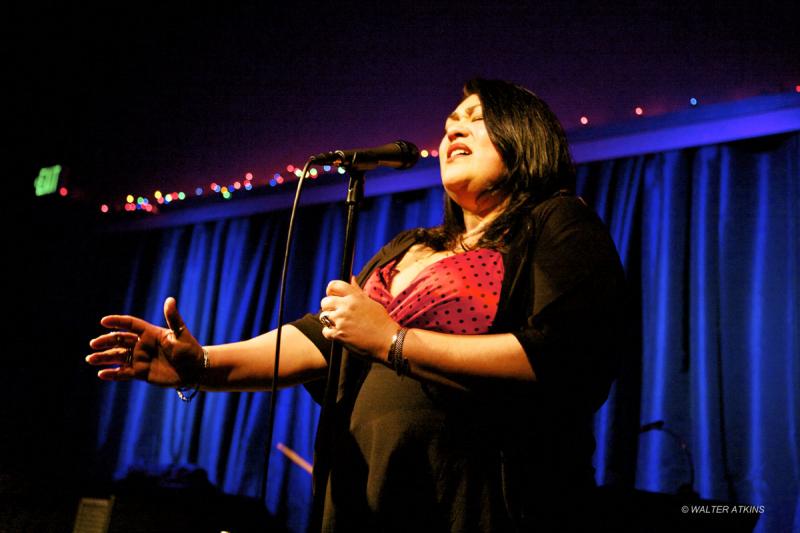 BY WALTER ATKINS
February 7, 2016
Sign in to view read count

The tune, Hound Dog... was the opening salvo from the bluesy singer. Crouse’s vocal control and robust tone made for a seriously entertaining weekend night.
—Walter Atkins

Talented East Bay vocalist Marina Crouse and her superb band lit up the intimate Sound Room with her distinctive brand of rhythm and blues on this chilly Saturday evening. The night was filled with a soulful blend of funky blues, ballads and original music with a few surprising twists thrown in. Guest vocalist Will Russ Jr. also contributed to the memorable show.

Located in downtown Oakland, the Sound Room is run by three dedicated music supporters along with numerous volunteers, and is also the home of Bay Area Jazz & Arts Incorporated. The nonprofit organization BAJA is centered around jazz, art, music education and of course, live performances.

On this night, football saturated San Francisco was hosting a fireworks display as part of the massive downtown NFL Super Bowl 50 festivities. Some fans were picking the Panthers and others liked the Broncos. At the same time across the Bay, the real sparks were being launched by Crouse at the Sound Room.

The El Cerrito singer and her top-notch band firmly established themselves on "Hound Dog," the initial song of the first session. The tune, popularized by Big Mama Thornton and Elvis Presley, was the opening salvo from the bluesy singer. Crouse's vocal control and robust tone made for a seriously entertaining weekend night in the East Bay. Her set list included: "I Don't Need No Doctor," "Directly From My Heart To You," "High Heeled Sneakers," "That's Why I'm Crying," "Rough & Funky Man," "I Idolize You," and "Talk To Me Baby."

Crouse jubilantly introduced the vibrant Will Russ Jr. (Ray Charles, Mariah Carey, Huey Lewis and the News) who asked the lively audience if they heard of Sam Cooke and Lou Rawls. He mentioned he spent a lot of time with the celebrated Rawls. Russ started with the touching "Lost And Looking" with competent support from Gould. His emotive rendering of the blues ballad of love and loss soon held the house spellbound.

Russ followed with his unique interpretation of the The Doobie Brothers staple "Long Train Running." Russ threw the band an "audible" when he started it off in half time. After only a few seconds, the consummate band deftly adjusted on the fly. This made for a novel introduction that surged into full speed later in the song. During the tempo transition, Russ playfully said he didn't want to exceed the target heart rate of the customers. The band also played the song with snippets from The Doors "Riders On The Storm" and other popular themes. Lufrano worked out on keyboards and Webber provided a Carlos Santana inspired solo.

The educator and singer talked about, "getting back to singing songs that I loved," adding she was, "a lucky girl." Crouse said her kids had to listen to her singing some of the same songs for the last 25 years. "They heard them all their lives." She was a classically trained opera singer and went into "Summertime" with a fresh and unexpected turn. Crouse performed Gershwin's vintage song with a reggae arrangement. After she concluded her island-flavored version, she commented, "I need a pina colada!" As the final notes faded, the house lights went off on cue.

Crouse's bluesy robust voice had a richness that was clearly demonstrated with her varied song list. On "Got My Mojo Workin,'" she sang with serious conviction while her band added timely background vocals. Webber invited five women from the packed floor up to the stage with, "Come on, get your booty on the stage." The improvised chorus eagerly repeated, "got my Mojo working" in unison and in tune. Crouse and her scintillating band had the crowd on its feet. D'mar jumped straight up into the air from his drum kit. His hi octane enthusiasm was clearly contagious during the entire set.

The musical connection between Crouse and Webber was enjoyable to watch. Crouse commented she was having so much fun and it had been a while. Webber added they were getting paid too. She liked what she sings. They charged into Bobby Blue Bland's "Further On Up The Road" which was fired off by the drummer. Crouse stated D'mar gets a workout, and Webber said the drummer had two pizzas and already burned all those calories. The band smoothly went into Percy Mayfield's moving R&B ballad "Please Send Me Somebody To Love" before the break. Seminal artists Ruth Brown and B.B. King both covered Mayfield's composition with success.

Crouse and company opened the second set with Alabama 3's "Woke Up This Morning." Koko Taylor's "The Hunter" followed next. This was, "one of my favorite songs" according to the vocalist. She and the band finished it with a strong flourish. Webber said the rhythm section of D'mar and Gould was "inspirational." Crouse treated her guests to one of her original songs "Rough & Funky Man." When the zestful D'mar jumped up this time, he played his drumsticks on all the front row tables and glasses before weaving his way to the back. When he came to one table, he told the startled patrons, "don't be afraid" and continued to play with reckless precision and vitality. The participants were thoroughly engaged as he implored them to "make some noise." The cozy venue was energized by the music and people were dancing against the walls and at their tables.

Crouse and friends propelled the driving "I Idolize You" by Ike and Tina Turner to a standing ovation. When Webber wanted to play more, Crouse replied, "No more wine for Garth." The last song of this dazzling evening was Willie Dixon's gem "Talk To Me Baby." Webber said D'mar usually jumped over his drums, but there was a small table in his way, making for a potentially awkward landing.

Marina Crouse and her band provided a personal and invigorating evening of ageless rhythm and blues, soul, reggae, jazz and original music. The SF Bay Area can look forward to hearing more potent music delivered with her powerful voice and eclectic style. The singer said this was her first time at the Sound Room, and it's a sure bet it won't be her last.