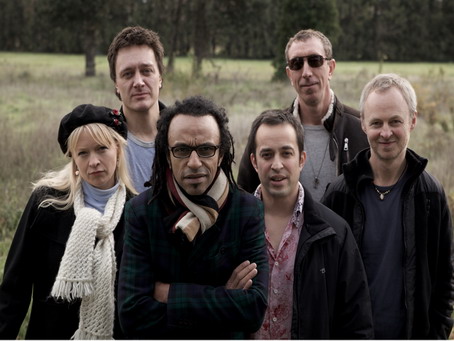 MK: I always use the same cymbal set, which is a 21-inch Armand ride. It's a lighter ride than the rest of the ride cymbals I normally use. Then I have another 21-inch ride with rivets. I'm using two six-inch Avedis and A Custom splashes, an 18-inch Dark crash cymbal and a 16-inch Armand Avedis New Beat. My hi-hat is 13-inch. I'm not using China on this recording, but I'm using a small, 11-inch Oriental splash cymbal which I've played before, but it's not in my set up all the time. My drum kit is my regular kit, which is 22 bass drum, 12, 13 and 16 toms. No matter whether I'm in the studio or whether I'm playing live, or whether it's pop, rock or jazz, I'm always using the same setup. I only change the cymbals if I'm playing rock; I use a rock ride Zildjian 21-inch, but always the same drum kit.

MK: I remember listening to Tony Williams, and then I went to see him in Paris. That's what woke me up. I was amazed; he was a genius. The way he hits the drums, it sounded like he was hitting wood—so loud, so precise and so warm. No metal at all. But this was not the drum kit, it was the way he hit the drum kit. He made the sound. And then he had this thing on the hi-hat going crazy. I love his sound. It's unique; as soon as you hear it, you know it's him. From that age, I think I was 18 or 19, I thought I should work on my sound. My background is different, coming from classical music. I did a little bebop but I wasn't good at all, though I listened to Thelonious Monk, Bill Evans and everything, and I still listen to that. Then I discovered the Motown sound, and I was really impressed with the way you could hear the vocal performances. Then my generation is fusion: Chick Corea, {[Weather Report}}, Mahavishnu Orchestra, Billy Cobham, Jaco Pastorius, Stanley Clarke. I wasn't paying attention so much to the drummers, but the music—just the sound of it. Then, living in France, there was a lot of mainstream variety music, but at the same time a lot of Celtic music, a lot of North African music and West African music.

My background is classical, my genes on my father's side are African, and all of this made me think that I should bring something which I like and which defines me. It was not an analysis; it just came to my mind. If I was ever lucky enough to play with someone like Marvin Gaye, I should have something special to bring to his music. When I was a percussionist at the Conservatoire, I was mainly playing timpani—I loved the timpani—and actually my grip on the drum sticks are timpani grips, which is on the top of the stick. I thought I should mix my classical background and culture with everything I've learned in my country. When I say "learned," I mean everything that came to my ears. I was doing a lot of sessions, working with French singers and doing jazz. I also had a few bands, fusion and things like that. It's like a melting pot of everything. So my sound and my style developed from that time.

After awhile, I reduced my drum kit and my cymbals. Then instead of doing the back beat on the snare I did the back beat on the floor tom. This wasn't from listening to other drummers; it was making a point of everything I had learned to bring something else to the music when playing as a sideman. I was doing sessions seven days a week, and sometimes the session leader would say, "I don't like that. I don't want you to play like that." I would say, "Let me please present to you what I came with." Sometimes it worked, sometimes it didn't.

It took me up to my meeting with Peter Gabriel in 1986, when I played "In Your Eyes." He was just in front of me, and I'll remember what he said for the rest of my life: "You know Manu, just play as you are." I thought, "What does that mean, play as you are?" Then I thought, "Yeah, it's a cultural thing," and I tried to bring all my different elements into my approach to the music. It was a big point for me to realize what I was trying to achieve. I was able to play with Jan Garbarek, then go back to Peter Gabriel, do some Joni Mitchell or some French mainstream music, et cetera, et cetera.

AAJ: Peter Gabriel puts on one of the most powerful shows around; what is it like playing behind him?

MK: Very intense. The audience makes you think you are like God, [laughs] and everyone on stage around Peter is another God. Then you have the pressure of being amazingly good. And I was in charge of the whole band, which was okay because that's what I'd been doing for many years. The audience is so with you, so generous and so excited, so positive, that they send you vibrations that tell you you're God. I have to say those years with Peter were ... amazing doesn't do it justice. When I think about it today, it was like a different world.

On stage there was a lot of power, also from Tony Levin, who is a great artist, not just a great bassist. These people have something. Of course they have talent, but they are blessed, touched with something that we don't know what it is. They kind of pass you that while you are with them. It's an interactive exchange but you don't know when you live it, it is just there. It's not easy to describe, but it's something magical. Most of the artists I've mentioned and have recorded with have and transmit this. I've been very lucky.

AAJ: When you played concerts with Peter Gabriel, did you ever feel nervous when he would fall backwards into the crowd during "Lay Your Hands on Me"?

MK: The first time I was, because I didn't know it was going to happen. Nobody told me. All of a sudden I saw him reach the front of the stage and fall backwards. Wow! I was amazed. I was drumming but I was more concerned what was happening in the audience. It was incredible; people were passing him all around the venue. Of course, it took a while to come back to the stage. Some nights it was very, very long [laughs]. Sometimes he'd go to the end of a big venue and then come back, slowly. It's like you're in a film, it's not for real.