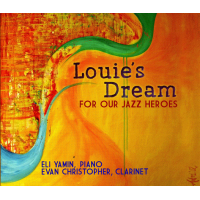 Hero worship has long been a magnetic force that helps to draw in the next generation of musicians, yet this very concept is often pooh-poohed by a segment of the musical and artistic community. These people feel that new is always better, and that originality can't thrive if artists acknowledge their forefathers and wear their influences on their sleeves. Pianist Eli Yamin and clarinetist Evan Christopher have never bought into this line of thinking. On Louie's Dream: For Our Jazz Heroes, both men revel in the opportunity to pay tribute to their influences.

Yamin, who spent time learning the ropes from saxophonist Illinois Jacquet, and Christopher, the native Californian who became New Orleans' favorite clarinet son, team up for a relatively low-key tribute to a short list of their idols. Crescent City giants, like trumpeter Louis Armstrong and clarinetist/saxophonist Sidney Bechet, and other jazz royalty, like the inimitable Duke Ellington, get the expected nods here, but Christopher and Yamin don't simply play to expectations; they play to their likes, which apparently include piano individualist Mary Lou Williams, poet Amiri Baraka and saxophone legend John Coltrane. Barroom blues is at the root of their trip through Williams' "What's Your Story Morning Glory," Thelonious Monk-ish ideals appear in muted form during Yamin's "Baraka 75," and Christopher's Coltrane tribute, "Impromptu," is as touching and tender as they come. These three songs successfully make the case that hero worship is not tantamount to audible plagiarism.

No figure completely dominates this session, but Ellington figures prominently in the mix. "The Mooche" gives Christopher a chance to tip his cap to clarinetist Barney Bigard and the Ellingtonians; "Azalea" drifts on by in a dream state; and "Dancers In Love" bounds along and features some snapping retorts. Other album highlights include the rarity-of-a-title-track and Yamin's "It's The Way That You Talk," which comes off like some imagined collaboration between Scott Joplin, Dr. John and Bob Dorough.

Yamin and Christopher are torchbearers for a time long gone, but they aren't museum piece musicians. They each extend the traditions of this music in their own sweet way here, as they pay their respects the best way they know how: through song.

Louie's Dream; The Mooche; You Gotta Treat It Gentle; It's The Way That You Talk; Don't Go Back On Your Raisin;; What's your Story Morning Glory; Azalea; My Jazz Hero; Baraka 75; Let His Love Take Me Higher; Impromptu; Dancers In Love; Louie's Dream Reprise.