By Patrick Burnette
August 7, 2018
Sign in to view read count 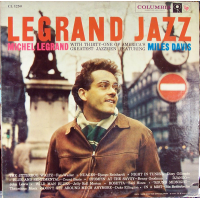 Michel Legrand is best known for his long and fruitful career in movie soundtracks, but as a young man in 1958 he was featured in an arranger's showcase with a collection of jazz masters, including Ben Webster, John Coltrane, Bill Evans, and Miles Davis.

Columbia Records in 1958 had an unparalleled roster to offer the young French phenom; the label also had the studio chops to make the result an audiophile treasure sixty years later (Impex Records reissued the album on vinyl and SACD in 2017; at least one critic gave the sound quality an 11 out of 10). LeGrand did fine work with the bounty on offer, crafting a series of tight and mildly challenging arrangements that showcased his writing while giving just enough room for his super-charged soloists to shine. There is perhaps a touch of Gallic insouciance which prevent the results from having the legendary status of the Gil Evans collaborations with Miles Davis, but LeGrand's genuine love of jazz or his commitment to sleek, modern swing is clear.

Given the personalities featured, it's a bit surprising this album isn't better known, but then the small army of greatness on hand may be one cause of its relative obscurity. LeGrand deploys three different ensembles across the eleven tracks: an expanded version of Miles Davis' first great sextet (with Phil Woods in Cannonball Adderley's chair), a trombone ensemble cushioning the mellifluous Ben Webster, and a little big band featuring four trumpeters. The different groupings give LeGrand lots of colors to play with, but the only thing holding the effort together is LeGrand's writing. There's a plethora of great musicians, but each only gets a few cameos (Miles Davis snags top billing, but it's actually Herbie Mann, for better or worse, who twitters on the most tracks).

So the album is as much a sequence of pleasurable moments as a unified whole, but the moments are extremely pleasurable and the air of sophistication hovering over the enterprise helps the center hold. LeGrand chose to arrange tunes written by actual jazz musicians rather than the usual Great American Songbook suspects. He pleasurably confounds expectations by having Miles Davis blow on "Jitterbug Waltz" and taking Bix Beiderbecke's "In a Mist" at cruising speed. Only "'Round Midnight" is a bit too on-the-nose, featuring Davis in much the same mood and setting offered on the trumpeter's Gil Evan's arranged rendition of the tune.

The mid-fifties to the mid-sixties were a magic time for jazz and if you enjoy the music of that era at all, LeGrand Jazz should not be missed. The vinyl edition sounds wonderful, but whatever format you prefer, Mr. LeGrand's tour de force is worth a listen.

The Jitterbug Waltz; Nuages; Night in Tunisia; Blue and Sentimental; Stompin’ at the Savoy; Django; Wild Man Blues; Rosetta; ‘Round Midnight; Don’t Get Around Much Anymore; In a Mist.