Krzysztof Komeda: Poet of the Piano

To listen to Komeda is to discover a world of notes in the space between chords, a structure in silence, a musical image that is able to contain almost everything precisely because it is nearly nothing.

To this day, the influence of Polish composer and pianist Krzysztof Komeda (1931-1969) can be felt in the works of contemporary artists like Marcin Wasilewski and, of course, in the music of his former trumpeter, Tomasz Stanko. It isn't too much to say that Komeda transformed the landscape of European jazz by the way he re-conceptualised the idea of jazz-composition and worked inventively with the relation between music and image, but he did it in his own quiet way and until fairly recently it has been hard to grasp his legacy, especially since his records have been hard to find. Fortunately, the Polish label Power Bros has made the vast majority of his albums available again and to new listeners the tribute Litania. Music of Krzysztof Komeda (ECM, 1997) has served as a convenient entry into the singular world of this extraordinary composer and pianist. 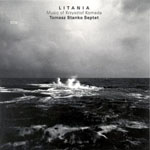 Litania. Music of Krzysztof Komeda (ECM, 1997) was an ambitious project launched by ECM-producer Manfred Eicher and Tomasz Stanko. As part of the process, Stanko studied every archival recording available of Komeda's music and a very special group was assembled including some of ECM's most prominent players: pianist Bobo Stenson, bassist Palle Danielsson and drummer Jon Christensen, but it is the presence of Komeda's old saxophonist, the Swedish legend, Bernt Rosengren that gives the record an aura of magic. Komeda was so infatuated with Rosengren's playing that he named a composition after him, the yarning "Ballad for Bernt" whose undiminished passion is revisited on the album with Rosengren giving a masterful interpretation of the instantly recognizable melody. As a whole, Litania manages to convey the beauty and complexity of Komeda's compositions.

According to Manfred Eicher, the purpose of the album was to look "into the shadows and the darker side of compositions like 'Litania' and 'Requiem.'" Consequently, the music has an air of the film noir about it with tension and dissonance lurking beneath the peaceful lyricism. Like a wave that suddenly rises out of a calm ocean as the picture on the album cover shows.

Thus, the ambiguous nature of Komeda's music is carried out perfectly and yet something is missing: the presence of the master himself. While Bobo Stenson is an inventive stylist in his own right, he is hardly a substitute for the idiosyncratic playing of Komeda, which gives his compositions their distinctive colour and mood. While Komeda's sound certainly is closely related to the ethereal, brooding lyricism that can be found on Litania, his musical palette was much broader than the playing of Stenson may lead one to believe. 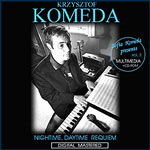 Komeda's playing encompassed the early swing of Count Basie, the bop music of Charlie Parker, Polish folklore, free jazz and the classical music of Johann Sebastian Bach and Frederic Chopin. He was a musical chameleon and yet he formed his own unique approach to the piano, a poetics based on the silence and space of the notes and an emphasis on empathetic restraint that unfortunately made some people believe that he wasn't that accomplished a pianist. As Andrzej Schmidt writes in the notes to the album, Crazy Girl: "Komeda was not considered a brilliant technician but rather a reflective and creative painter of moods." However, if being a brilliant technician means having knowledge and theoretical and practical understanding of the full possibilities of an instrument and the ability to take advantage of them, then Komeda was indeed a brilliant technician. The difference between him and artists like Oscar Peterson and Art Tatum was that Komeda's technical brilliancy was accentuated by what he didn't play instead of what he played. Thus, to listen to Komeda is to discover a world of notes in the space between chords, a structure in silence and a musical image that is able to contain almost everything precisely because it is nearly nothing.

Komeda understood that music is created in a dialectic relationship with silence and chaos feeding of each other. The soothing voice of a single chord is in direct correspondence with the polyphony of different musical voices shouting against one another. Perhaps, one of the most significant compositions that embody the relationship between structure and chaos, melody and dissonance, is "Night-time, Daytime Requiem" whose title alone seems to suggest the play between the darker and lighter aspects of life.

Speaking of the piece, Tomasz Stanko says: "The blend of control and freedom in a piece like 'Night-time, Daytime Requiem' is unique. But if you look into the score you can see that the melodies and the structures really dictate the emotional content of the music. It's actually very logical." The composition is dedicated to John Coltrane as a response to the news of his death, but it owes little to the famous saxophonist's sheets of sound. If anything, it's inspired by the avant-garde phase of Coltrane's work. It starts out with the cacophonic roars of saxophonists Zbigniew Namyslowski and Michael Urbaniak whose screams break through the opening silence to form an untraditional theme that is repeated at various stages throughout the lengthy composition.

After the stating of the theme, silence sets in with the buzzing sound of a bowed bass and Komeda's crystalline chords spread out like broken glass on a cold pavement. The structure encompasses everything from an elastic free pulse to the slow movements of elegiac hymns and chaotic horn explosions and the music owes as much to Albert Ayler's funeral marches as Chopin's nocturnes but it is all filtered through Komeda's gift to never overdo the affect of the playing. This is true whether the emphasis is on the more quiet moments or the intense outbursts of energy. "Night-time, Daytime Requiem" covers a life's work of subtle emotional shades and shapes. 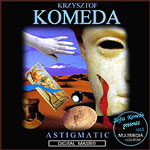 While "Night-time, Daytime Requiem" belongs in the canon of Komeda's compositions, the single most important collection of his works is Astigmatic. Indeed, it's hard to underestimate the influence of the album not only on Polish jazz but European jazz in general. The album consists of three lengthy compositions, all written by Komeda: the epic title track, "Kattorna" and "Svantetic" whose name derives from the Swedish poet Svante Forster who was a close friend of Komeda. The music on Astigmatic is played by a quintet consisting of trumpeter Tomasz Stanko, alto saxophonist Zbigniew Namyslowski, bassist Gunter Lenz and drummer Rune Carlsson who all join the leader. The music has a chamber-like intimacy in the sense that each instrument is allowed its own distinctive role in the realisation of the music's texture. Komeda directs the ebb and flow of the notes where various musical voices play significant parts. There is a particular strong moment on "Astigmatic" where the naked sound of Namyslowski's saxophone calls out in the darkness before it's woven into the ever-changing web of the musical pattern.

Speaking of Komeda's ability as a director of music, Adams Slawinski says: "By sheer force of his personality Komeda justified his need to control the emotional territory hitherto reserved for symphonies. He expanded the range of expression in jazz by adding a dramatized lyricism - it's force reaching the intensity of ecstatic and mystical experience." What is felt, then, in Komeda's compositions is a necessity of expression that arises in the paradox of an open form that is completely controlled. As a pianist Komeda worked outside the limitations of his instrument, preferring to create a greater whole that was centred on the music itself, which existed beyond the limited definitions of a genre. Simply put, Astigmatic is the sound of jazz reinventing itself, finding a new form to express the musical aims of the composer.

Even though Komeda's compositions expressed a desire to expand the understanding of group interaction and the fixture of form, he was still deeply influenced by tradition in jazz as well as in classical music. Two influences, which might seem as far as one could possibly get from each other, are merged in the musical universe of Komeda: Count Basie and Johann Sebastian Bach. Their presence can be felt in the compositions: "Memory of Bach" and "What's up Mr. Basie." "Memory of Bach" is based on an invention by Bach and features the distinctive use of chiming vibraphones that dance across the contrapuntal swing of Komeda's playing. The idea of letting different musical voices speak to each other is a characteristic sign of Komeda's compositions and something that can be traced back to Bach's revolutionary way of writing music.

If Bach represents contrapuntal influence on Komeda's music then Count Basie is the epitome of his love of swing. The old master is given his due on "What's up Mr. Basie," also known as "Hvad med os?" ("What about us?") Here light swinging is combined with an infectious theme that goes straight into the ears. The influence of Basie is also evident in the piano playing of Komeda. Like Basie, Komeda prefers the light touch of a feather to a dense layer of chords. Rather than playing fast and with many notes, he strategically places his chords and adds nuance and colour to the touch while keeping the feeling of swing, the rhythmic breathing of time.

The Life Work of Krzysztof Komeda

It could be that it's Komeda's ability not to play too much that has made him so eminently suited to be a composer of movie scores, a profession for which he is now mostly known. He avoids the pitfalls of melodrama that is the chief obstacle of any soundtrack. The music is felt but not imposed, the emotions conjured but never vulgarly displayed. As a poet of the piano, he creates lingering sound images and makes room for an open interpretation. This is a quality of Komeda's music: it speaks without using grand gestures, the drama is there but it isn't necessary to spell it out, the poetic tension is allowed to shimmer under the surface. Komeda was a composer, but he was just as much a pianist. In reality, the two aspects of his work are not to be separated. He composed with the unpredictability of the improvising instrumentalist and he played with the conceptual overview of a composer. To grasp the full range of his artistry it is necessary to go back to his records. Here, one can sense a poet at work, exploring and arranging, finding that singular voice, which has made his life's work a lasting musical legacy.

Acknowledgement: Quotations are taken from the liner notes to Litania. Music of Krzysztof Komeda (ECM, 1997) and Crazy Girl (Power Bros, 2003)