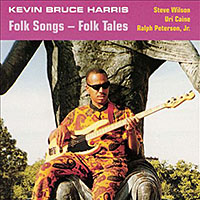 Harris first emerged as part of the M-Base collective that began with saxophonist Steve Coleman and his Five Elements group, with whom the bassist played and recorded from 1986 to 1988. Early credentials for Harris also included stints with Cassandra Wilson and Graham Haynes. His career may have stalled by the turn of the millennium, but he's left a small discography of his own, the strongest of which is undeniably Folk Songs—Folk Tales, a superior blowing date that features saxophonist Steve Wilson, pianist Uri Caine and drummer Ralph Peterson, with a spoken word guest spot by Tracy Morris on the closing "Skin," a song composed by Harris and Morris, as he writes in his liner notes, "about useful beauty in the everyday."

But it's the eight other tunes—four by Harris, one each from Caine and fellow M-baser, guitarist David Gilmore (who doesn't appear on the record), and two from Peterson—that make Folk Songs—Folk Tales the exciting and criminally undervalued recording that it is. The material ranges from powerful modal workouts like Harris' opening "Attack of the Shrews," the incendiary "Safari," dark-hued "As She Glows" and reggae-tinged "Master Divine" to Peterson's funkified "Inertia" and equally groove-centric "Freight Train," Gilmore's lyrical but thematically knotty "Sophie's Dance" and Caine's synthesized vibraphone-driven "Iona Laughing."

The playing is stellar throughout, as would be expected from a group of players who were already strong leaders in their own right, but beyond Harris' lithe bass work, both in support and as a soloist, it's Peterson who is the brightest star. The '90s seemed to be a particularly fruitful period for the drummer, whose contribution to another Rediscovery, clarinetist Don Byron's Tuskegee Experiments (Elektra Nonesuch, 1992), was similarly definitive. His own Fo'Tet (which included, at various times, both Byron and Wilson) was one of the best modern mainstream groups of the '90s and early '00s, but his work on sessions like Folk Songs—Folk Tales was, if anything, even more potent, more visceral. Between Peterson's tumultuous but always in the pocket kit work and Harris' dexterous interaction, in fact, the album bristles with fusion energy despite being in a largely acoustic setting.

A lost treasure that never got the acclaim it deserved, Folk Songs— Folk Tales is worth revisiting for its compelling writing and exhilarating, uncompromising performances.