By Dan Bilawsky
December 30, 2014
Sign in to view read count 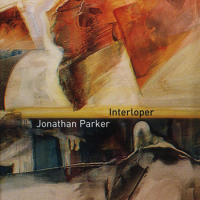 Saxophonist Jonathan Parker has covered quite a lot of ground since graduating from the Oberlin Conservatory of Music in 2008: Shortly thereafter, he relocated to Shanghai, China, carving out a performing life for himself there. Then, he was accepted into the Kennedy Center-sponsored Betty Carter's Jazz Ahead program in 2010. Parker moved to New York City in the fall of that year, where he quickly gained some attention with the release of The Jonathan Parker Group (Self Produced, 2010)—his debut album, recorded during that two-year sojourn in China. He subsequently snagged an ASCAP Young Jazz Composer Award for "Lois," which appears on the aforementioned debut, completed a Masters Degree in Jazz Performance from The Eastman School Of Music, and moved on to Washington D.C.

Now, with all of those experiences under his belt, Jonathan Parker returns with Interloper. It's an exciting octet date that's chock-full of tight ensemble work and compelling solo statements. Parker utilizes all of the tone colors and rhythmic tools at his disposal here, alternately creating swinging unison statements, punchy background figures, measured support, and gorgeous chorale-like passages. Interloper is an album that shows the full depth and breadth of his talent(s), both as player and writer.

The band swings hard right out of the gate on "Clearyisms," a number that works in a half-time section, stop-time hits, unison horn runs, and a song-ending vamp, serving all the while as a showcase for soloists. From there, it's off to "Jim," a piece that opens on a serene setting before shifting to waltz time, and "Sundown," a song that balances reflective thoughts with bluesier notions. As the album continues to unfold, Parker further proves himself as a composer and arranger, subtly working different ideas into standard forms. It's easy to miss these things, like the saxophones-and-bass passage that builds during "Gage" or the light wind textures behind bassist Curtis Ostle's solo on "Tranquility," but they shouldn't be overlooked; it's these artful touches that help to elevate this music.

While the writing tends to give this album its identity, the soloists also deserve their due. Players like Parker, trumpeter Dave Chisholm, and pianist Chris Pattishall all make a big impression here, and plenty of others also make a splash on occasion. Parker allows the individual(s) to shine while remaining focused on the group sound throughout. With Interloper, he's created an album that's rewarding on so many levels.