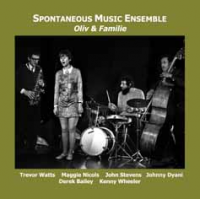 Issued twenty years after his death, aged just fifty-four, Oliv & Familie serves as a fitting reminder of the Spontaneous Music Ensemble's charismatic and controversial drummer and leader, John Stevens. Not only does this release return to circulation the two "Oliv" tracks that constituted the SME's eponymous third album, originally issued on vinyl by Giorgio Gomelsky's Marmalade label in 1969, it also adds the two previously unissued "Familie" tracks which shed much light on the ensemble's evolution and development. Most importantly, leaving history aside, this album is over an hour of mesmerizingly beautiful music.

Crucially, compared to SME's previous two instrumental albums—Challenge (Eyemark, 1966) and Karyobin (Island, 1968)—their third documented a period in which the SME featured female vocalists including Pepi Lemer, Maggie Nichols, Carolann Nicholls, Norma Winstone and (though not heard here) Julie Tippetts. So, the cover photograph of a four-piece SME fronted by a mini-skirted Nichols may not sit easily with many people's expectations of the group! Leaving aside the musicians' appearance and moving on, we find that the vocals are a welcome addition to the SME sound, sitting comfortably alongside the instrumental components and being highly compatible with them.

The album opens with the first version of "Familie," performed by an eleven-member SME that included both Lemer and Winstone on vocals. It was recorded in January 1968, the month before Karyobin, and features Stevens plus Derek Bailey, Evan Parker and Dave Holland from that album's line-up. The first half of the piece is structured and evolves slowly with extensive use of sustained notes by everyone, particularly the vocalists, who are featured prominently and contribute greatly to the track's tranquil mood. Although this version is previously unreleased, its structure and atmosphere are similar to a previously-issued July 1968 quintet version on Frameworks (Emanem, 2007) that was characterised by its effective use of Winstone's voice on sustained and click pieces plus passages of free improvisation. Despite its variety, the version of the piece on Oliv & Familie hangs together well, with the eleven players never cluttering it but combining together effectively.

As well as Stevens, the album is notable for the contributions of those other late, great SME stalwarts, Kenny Wheeler and Derek Bailey. "Oliv I" showcases the two of them together, with Wheeler playing an extended flugel horn solo over a drone-like accompaniment created by the voices, saxophone, bass and drums, offset by frequent interjections and support from Peter Lemer's piano and Bailey's guitar. In typical Wheeler fashion, the end result is a solo that is both meticulously constructed and executed, his tone being plaintive throughout so that it oozes emotion, even when he at his most garrulous. Altogether, touchingly beautiful—as fine a way as any to remember Wheeler's understated brilliance. After the second track from that Marmalade album, "Oliv II" featuring the quartet pictured on the cover—Stevens, Nichols, Trevor Watts on alto saxophone and Johnny Dyani on bass—a reprise of "Familie" concludes this very welcome addition to the SME discography.