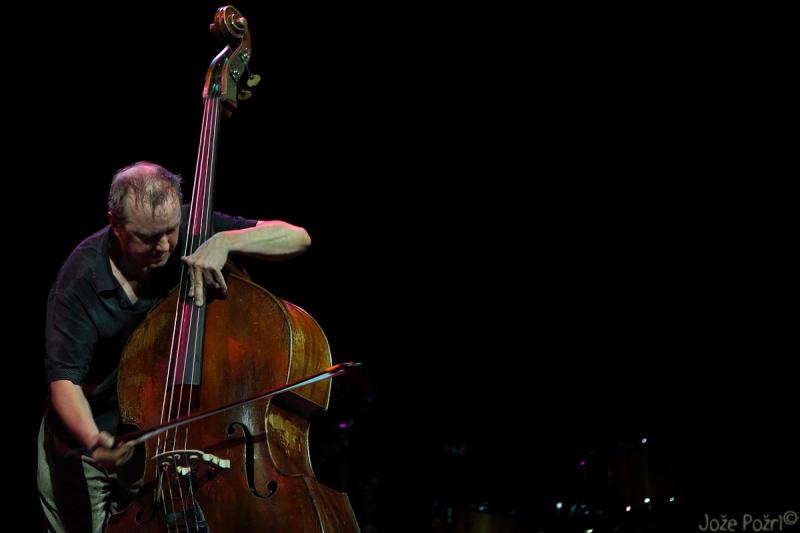 By SAMMY STEIN
March 25, 2014
Sign in to view read count
When John Edwards plays his double bass, he is extraordinarily engaging. He plucks, tweaks, bows, hits and hums aloud. So engrossed is he that it is difficult to look away. One memorable gig, I overheard a member of the audience say " It's almost pornographic what he does with that bass."

I first came across Edwards whilst watching him as part of a trio in London. I kept finding myself watching this incredible musician, completely absorbed in playing or listening to the other musicians when his hand or bow was not busy. So, sometime later we met outside a café in London for some serious discussion.

Edwards has played with many musicians as well as had his own bands and projects. He is, perhaps, one of the hardest working bass players in the free jazz scene today.

Edwards was born in Hounslow, west London. Even as a small boy he says he, "heard the bass" in music. He distinctly remembers going to see the Walt Disney film, Bambi in the local cinema when he was just 4 years old. "The music,"he says, "especially the low ends, had a particular effect on me and I realized even then that the deep notes set the tone, gave a sense of drama and added to melodies." When he was about 13, his older brother played drums and Edwards would listen to the rhythms. He spent many hours sitting on a chair, playing rhythms on the arms.

When his brother was 18 he formed a small punk band with a drummer so bad that Edwards thought, "I can do that" and had a go. A little later on, with Edwards still only 14 years old, his brother, then 19, played at gigs while Edwards would go along and found himself drawn to the music, especially the bass lines. He began to listen to tapes and records and even made recordings of his own, using a reel to reel machine and anything available that made a noise.

Edwards knew from early on he would never get a 'job' as such. "It just was not in me" he says, "to do the nine to five and initially I wanted to be an artist, perhaps specializing in visual art but by the time I was a teenager the buzz and energy I felt when listening to music began to override my passion even for art and I realized this was where my heart lay. It was part of who I was. I was lucky enough to have parents who supported their sons in doing whatever they wanted to try so there was no pressure to do this, that or any particular career."

Edwards began to pick up instruments whenever he could and tested the sounds he could create with them. "There was," he says, "an old ukulele with 2 strings always knocking around at home and I would pick it up and play it like a bass guitar, finding different rhythms and sounds."

Edwards went to art school when he was 16 and, together with friends, played music whenever he could. They played wherever they could, in garages or other peoples' front rooms using whatever they found, like a granddad's keyboard. Edwards bought his first electric bass and discovered by playing it unplugged he could find new sounds, ways to tweak notes. "I didn't know what I was doing really, but I did it a lot," he told me with a grin.

Edwards left home amicably at 18. He never really worried about money or achieving success. For a while he lived in various squats, signing on and learning more about music. He discovered music libraries and spent hours looking at the collections. He checked out anything and everything, and listened every kind of music he could lay his hands on, including Copeland Schoenberg, classical, jazz,folk, Asian,African,and Indian.

When he was 22 Edward's nan died, leaving him the princely sum of around 350 pounds, with which he decided to buy a double bass. He had recently decided that was his instrument because of the low shifts, rich tones, and dynamics and textures which could be added. Once he bought the double bass he says, "That was that." He began learning, playing, practicing and developing a unique style. He slowly built a reputation for himself and got work as a double bassist. Amazingly perhaps, up to this point, Edwards had not learned to read or write music. It was just something he never did. With the increased work came opportunities. "There was one time,"' he remembers, "when I got a call to do a recording at Abbey Road Studios. I went along but could not read the music—it was a nightmare." So, he learned to read the music and write it down.

"Inspiration," Edwards says, "comes from everything. First it was 50s and 60s pop music, then Lol Coxhill in the late '80s and people like Bruce Turner—10 years older than Coxhill but he had played with many of the great jazz musicians. Now, almost everything inspires me."

Edwards has been a member of several bands including The Pointy Birds, God and B Sharps for the Poor. He has played with Louis Moholoh Moholo, Peter Brötzmann, Wadada Leo Smith, Evan Parker, Mats Gustafsson, Sunny Murray (who played with Coltrane), Marshall Allen (who now leads the Sun Ra Arkestra) , Kenny Wheeler and John Tchicai to name just a few.

Classification is not for Edwards. "If," he told me with a grin, " I was stopped by the police and asked what I did for a living I might say I am a jazz musician, and for official documents I am a bass player and teacher, but I don't classify myself at all, no."

Edwards clearly loves playing live gigs. "I simply love the effect an instrument has on people. It is what you can do with it- -the sounds created. It is a physical thing." He is very aware of the reaction of an audience when he plays, although sometimes he becomes so engrossed he briefly forgets they are there and has to bring himself back. "Open your eyes!" he tells himself.

Sometimes he gets irritated when there's a lot of shuffling, coughing or moving around by the audience, but mostly Edwards just enjoys being in a room with lots of other people. "Onstage is good" is how he sums it up. "It is important to just enjoy the music, just being here, in this world with people and how we interact is important. Music changes moods. Say you had a street with 10 different parties going on in 10 different houses. Each house plays different music. There will be 10 different moods according to what is played. Playing live is like that. Maybe we are all hard wired to gather together. I mean, people still go to the cinema in spite of having 70 inch screens at home. It is the group thing. We thrive in groups and nothing can recreate live gigs where we are all in the same room shuffling, farting, coughing and all of it. Certainly in our culture, the thing of some people being on stage playing and some listening is all part of the event."

Edwards speaks a lot about connecting and interactions. Much of his playing is improvised. On this he says, "Improvised music at its best, whatever it sounds like, gives the potential for complete equality, where everyone is responsible for what they do and how they interact. We respond to sounds and music because it is a physical thing. Whether you like something or loathe it there is a reaction to the sound." There is a kind of hierarchy established at live gigs with people onstage and in the audience and John says he sometimes find this odd but, in any performance that happens because "at that time the people who can play, play and those who don't, or don't want to at the time, listen."

Practice is very important, and Edwards practices whenever he can. Some gigs are rehearsed, but some are not. Edwards plays regularly with some musicians, including saxophonist Evan Parker and guitarist John Russell. Their gigs are unrehearsed. but Edwards says they have a long history together and are very well connected musically so unrehearsed gigs are probably better. "Onstage" says Edwards, "I listen and feel. It is similar to having a conversation."

Of the scene at the moment, Edwards comments, "it is loaded politically at the moment. It is about all of us, how we get along. Music has always been the antithesis of political power- jazz maybe more so and free jazz even more. The establishment— by which I mean people in offices, suits and government— maybe want people to do nothing. They want to keep people drugged up with the banal, working, doing the same thing. Maybe free music upsets that."

Edwards understands that some people find free jazz hard to accept. One musician said to him, "you mean you just rock up and play, so there can be no mistakes, you can't do wrong?" but Edwards says he loves the connectivity of playing free, the reaction to an audience and those onstage. Commercially, it may not be the genre which pays most but Edwards says, "The luxury of dong this kind of music is that you are more or less invisible to major commercial controls like the record industry. What could be better?" he asks grinning from ear to ear " I would rather be doing this, not worrying about contracts, etc, than have everybody watching me, telling me how to feel and play."

For Edwards, life is currently wonderful and talking to him you get a sense of a man truly happy in himself and what he does. "I live a charmed life at the moment. I play with many different people. I do sessions, I have played in projects with large and small budgets. I have dealt with agents, no agents and sometimes I have no idea how everything will go on stage. I still do door money gigs too, which I enjoy. What else could I ask for?"

Edwards has many projects on the go but achieving fame is not important because getting to play with so many people and trying so many different things is what adds meaning to music for him. With some projects he can direct things a little more, with some he is simply a part of the project. Both are worthwhile. Sometimes, the commercial side of things is not so great because gigs and festivals have to be viable, but Edwards is fine as he is.