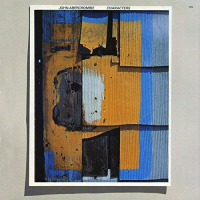 Guitarist John Abercrombie's emergence as a guitarist of singularity seems, in retrospect to have happened very quickly. A band member in the horn-driven jazz-rock band Dreams alongside drummer Billy Cobham and the Brecker Brothers, as well as stints with fusion keyboardist Barry Miles, saxophonist Gato Barbieri and Cobham's own group, it was a remarkable period of evolution for the guitarist. Abercrombie made his first ECM appearance with Dave Liebman on the saxophonist's own label debut Lookout Farm (1974), but within seven months of its recording in October, 1973, he was back in the studio making his first ECM album as a leader (and the beginning of a relationship that continues to this day). Timeless, released in 1975, quickly established the guitarist as a bandleader and writer of note, with its lyrical, atmospheric title track ultimately becoming an off-covered modern standard.

But at this time, Abercrombie was still finding out who he was musically; as great as Timeless is, it's hard not to feel the spirit of Mahavishnu Orchestra's John McLaughlin looming large over this trio date with Jack DeJohnette and ex-Mahavishnu keyboardist Jan Hammer. But while Abercrombie had already forged a strong relationship with DeJohnette—appearing on the drummer's earlier Prestige albums but, more importantly, as a member of the collaborative Gateway trio (with bassist Dave Holland) and the drummer's Directions band, whose New Rags (1977) was a recent Rediscovery—it was his ongoing relationship with guitarist/pianist Ralph Towner that had an even more lasting impact. In a 2004 All About Jazz interview, Abercrombie cited Towner as someone with whom he immediately connected as a friend when they were living in Boston in the late '60s. More important, however, was his comment that "He was a powerful influence on me as a player and also as a composer. He's one of my favorite musicians, period, but his songs really attracted me and that influenced how I started to write songs."

While Gateway's 1975's eponymous ECM debut was extremely well-received—suggesting that change was certainly in the air for the guitarist—it was more of a transitional album for Abercrombie. So, too—but to an even greater degree—was the 1976 debut of Abercrombie's duo with Ralph Towner, Sargasso Sea. But the real watershed album for the guitarist—positioning Abercrombie as a writer of note and a player who'd completely left his fusion days behind him, emerging as a guitarist who never seemed to play the same thing twice, was refreshingly free of the signature licks that even some of his similarly talented peers seemed to fall back upon at times, and yet never sounded like anyone else, is today's Rediscovery. Characters is a true solo recording, where the guitarist wrote all eight compositions and, overdubbing electric and acoustic guitars alongside the electric mandolin that became a personal signature through to the early '80s, remains one of the most impressive solo guitar records ever made. With a largely warm, reverb-heavy tone on electric mandolin and guitar, with Characters Abercrombie had left any vestiges of McLaughlin far behind, more akin, instead, to Jim Hall (if anyone) in his ability to remain relentlessly fresh and non-repetitive.

Unlike other guitarists who enjoyed working in the solo milieu like the more mainstream Joe Pass—whose music always seemed like nothing more than a context-setter for the guitarist's undeniably impressive improvisational acumen—for Abercrombie, while improvisation was a key element, so, too, was the writing. In fact, one of Characters' most enduring qualities is how Abercrombie totally blurs the line between form and freedom across a set of compositions so memorable that, even hearing them for the first time in a few years, they're instantly recognized like old friends. "Ghost Dance" may be filled with spontaneous creation, with layers of acoustic guitars, volume pedal-swelling electrics and more; but every time the octave-driven motif that defines the piece arrives as a rallying point, it becomes clear there is more method to his work, even at its most unfettered.

While other guitarists have recorded solo albums with layers of guitars—label mate Pat Metheny, for example, with his superb New Chautauqua (ECM, 1979)—it's usually far easier to determine how they were made; what came first and what was subsequently overdubbed. This is not the case with the seemingly more improvised nature of Characters. Only the ethereal "Backward Glance" and "Paramour"—a lovely ballad that the guitarist would revisit when he formed his first band with Richie Beirach, George Mraz and Peter Donald, recording the song on the group's 1979 ECM debut Arcade (one of three recordings by that quartet awaiting reissue as one of the label's Old & New Masters Edition box sets)—have clear enough form throughout to be able to figure out the probable order in which Abercrombie laid down the tracks. But even so, Abercrombie's loose interpretation of time, making it a fluid thing that ebbs and flows naturally. with his gentle melodies and acoustic accompaniments, makes the way every piece on Characters hangs together a remarkable feat...and a mystery.

Still, the "how," really matters not; the "what" is far more important on an album without a single weak track. Additionally, ECM label head/producer Manfred Eicher's astute sequencing renders Characters a gripping listen from start to finish—a dramatic narrative with the kind of nuanced yet surprisingly broad dynamics and an expansive soundstage that make it a particularly ideal album to hear on a great set of speakers like the Tetra 222s.

The opening "Parable" begins with a reverb-drenched electric mandolin solo. "It was really a soprano guitar," Abercrombie explains, in an as-yet unpublished interview, "tuned an octave higher than a guitar. But Fender originally marketed it as an electric mandolin, tuned in fifths. I was at a jam session where [Mahavishnu Orchestra violinist] Jerry Goodman showed up with one. I thought it sounded so cool; the next day I bought the last one they had at Manny's [a renowned New York City music store], and that became my instrument." But when, four minutes into the ten-minute piece, Abercrombie evolves towards a simple motif, form suddenly emerges, with acoustic guitars providing a contextual foundation over which he continues to solo.

Abercrombie followed Characters with Arcade and two more albums with his newly minted quartet—1980's Abercrombie Quartet and 1981's M—and, subsequently, his second (and, to date, last) record with Towner, 1982's Five Years Later. All of these albums would continue to strengthen Abercrombie's voice both compositionally and as a player. But if Sargasso Sea was the first album to reflect Abercrombie's emergence, it was Characters that demonstrated the guitarist's growing confidence by taking on that most vulnerable and naked type of recording: the solo album.

Characters was, indeed, Abercrombie's "coming of age" album; a record that still feels fresh and new 38 years after its release, it's one well worth Rediscovery.