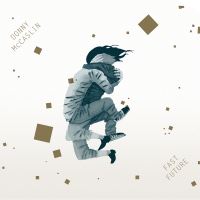 Saxophonist Donny McCaslin brought a fresh perspective to the acoustic-electronic jazz soundscape with 2012's Casting for Gravity (Greenleaf Music) which earned a Grammy nomination for "Best Instrumental Jazz Solo" for the track "Stadium Jazz." Thankfully it was not a one-off as McCaslin reassembles the tightly knit band and savvy production from saxophonist David Binney in Fast Future, a release that continues the groove factor.

Like its predecessor, the music pulsates with energy as McCaslin's tenor powers over funky riffs, spaced-out backgrounds, and crisp beats provided by drummer Mark Guiliana, and bassist Tim Lefebvre while Jason Lindner colors things with copious keyboards embellishments. But there are also a few surprises. For one, there's the inclusion of wordless voice harmonies in the hard driving title track and the affecting spoken word performed by artist Jana Dagdagan on "Love What is Mortal."

Next comes the appeal of Electronic Dance Music in "54 Cymru Beats" and the reggae shaded "Squeeze Thru" as McCaslin cites EDM musicians/composers Aphex Twin and Skrillex as influences alongside jazz/electronic giants Herbie Hancock and Weather Report as the band stretches out and kills "This Side of Sunrise" and "Blur" with spot on performances and improvisation. In summary, McCaslin's Fast Future further suggests that the lines between acoustic jazz and electronica are at times blurred and that music regardless of its instrumentation can find common ground.

Fast Future; No Eyes; Love and Living; Midnight Light; 54 Cymru Beats; Love What is Mortal; Underground City; This Side of Sunrise; Blur; Squeeze Thru.