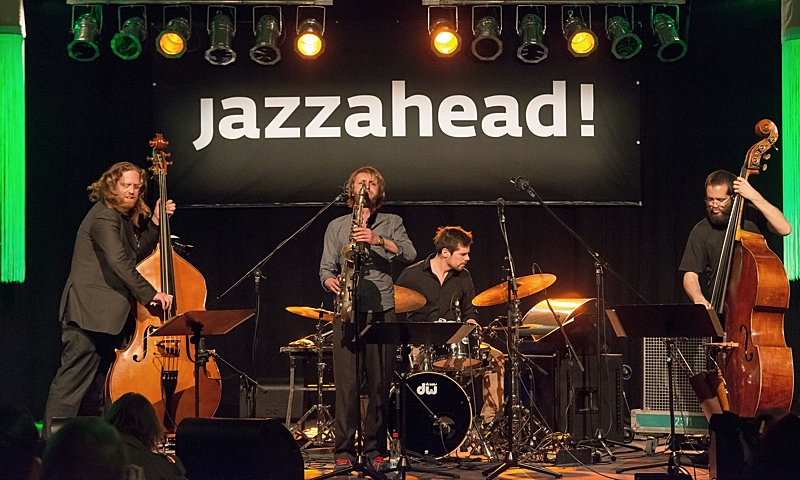 It's hard to imagine, with diminishing music sales, the emergence of streaming services as the musical version of the antichrist for musicians and the increasing challenge of putting rear ends into seats at North American jazz festivals, but as it heads into its ninth year, Jazzahead! continues to provide unassailable evidence that it may be struggling to be so, but jazz is, indeed, a business. A place where artists, labels, festival presenters, club owners, publicists, media and anyone else in any way connected to jazz can comingle in the contexts of daytime conference streams, performance showcases and booths, booths, booths—all manned (peopled?) by folks who want you to hear their latest release(s) and check out their band(s)—Jazzahead! has become the place to go if you're looking to find your way into an international network of jazz industry people that quite literally covers every continent but two: the Arctic and Antarctica...and if a jazz band ever emerged on one of those two isolated locations, they'd no doubt be added to the Jazzahead! roster, too.

One of the most admirable and appealing aspects to Jazzahead! is that it is staffed by people who listen. The event has grown (a very good thing) to the point where it was becoming increasingly difficult to cover evening showcases in the nearby Kulturzentrum Schlachthof—literally an old slaughterhouse that has been converted into a performance space, bar and restaurant, where so many people were going that unless you were there early enough to find a seat, more often than not you had to listen from near the door (not always in the hall), trying to look over masses of peoples' shoulders to catch a glimpse of the act. While there are even more solutions planned for invited journalists who were having trouble getting their work done, the 2014 edition of Jazzahead! already made one very significant improvement: to open up one of the halls in the Congress Centre that houses the majority of the event's activities for evening showcases, so that there were now two venues to choose from. The result was relief in both venues and, while it might well have been possible to move back and forth between them, one of the other problems with becoming a regular at Jazzahead!—and one that nobody expects the organizers to resolve— is that most attempts to keep to a strict schedule are scuttled simply because, walking from one venue to another, or even from one end of a hall to another, someone—or, more often than not, someones—will yell out, "Hey! John!!" and the next thing you know, you're seeing someone you've not seen in months or perhaps even years, trying to catch up with them while still attempting to stick to that schedule.

So, after two prior years covering Jazzahead—2011 and 2012—the big lessons learned have been: don't over-commit, don't try to take in everything, and....relax. The result? Jazzahead! 2014 was the most pleasant experience yet, with plenty accomplished, and that includes, despite being there for only two full days, catching more music than in the previous years, and with far less stress and considerably more comfort.

As ever, the booths represented a cornucopia of music covering the broadest possible purview of jazz. Curious what ECM is up to? There's a booth. Looking to find out more about ACT, Intakt, Enja, Effendi, Hubro, ILK, Whirlwind or the nearly countless collection of established labels and others looking to break into the market? No problem. Want to find out what's going on in Norway, Finland, Sweden, The Netherlands, Canada, Spain, Portugal, Brazil, Russia, Indonesia, and pretty much any country where jazz is being released has on offer? It's all there. In fact, one noticeable change in Jazzahead! over the past several years is that more and more countries are setting up booths so that artists, labels and other industry folks who might not be able to justify one will have a defined place where they can set up meetings.

Of course, there's always the coffee bar and cafeteria for more informal get- togethers and, if you're lucky enough to be booked in it, the adjoining Maritim Hotel (connected by an indoor hallway to the congress centre) where it's rarely possible to predict with whom you'll be sharing breakfast, but one thing is for sure: you'll never be eating alone.

As Jazzahead! looks to its 10th anniversary in 2015, it's already planning to move to a larger venue with larger halls, with more space for networking and concerts. This is great news, as the event has been growing steadily, both in the number of professional participants (over 2,800) and visitors who came to enjoy the over 100 showcase concerts (close to 16,000). As ever, Jazzahead! featured a number of themed afternoon and evening showcases, this year sponsoring a Danish night, a daytime German Jazz Expo and evening Overseas Night, the latter including groups from Canada, the USA and Australia. The semi-annual European Jazz Meeting was also the scene for daytime showcases by artists coming from countries including Slovenia, Italy and Switzerland; Italy, Belgium and Austria; and The Netherlands, France and Norway. A shuttled Jazzahead! ŠKODA Cub Night on the event's final night ,made it possible for invited guests to check out the action at over 25 clubs across the city of Bremen.

As ever, it was simply impossible to catch it all, and so this year, rather than trying to move around from venue to venue to catch ten or fifteen minutes of a thirty- minute showcase at best, the choice was made to stick with a single venue (Halle 2), in order to catch full showcases—short enough as they were, it was all the more important to catch them in their entirety to get a more complete idea of what each artist/group was about.

Each year, Jazzahead!, in collaboration with automobile manufacturer ŠKODA (one of the event's major sponsors) delivers an award to a member of the jazz community for what is usually a lifetime of contribution. The recipients have ranged from musicians like Dutch drummer Han Bennink, who won in 2013, to ACT label founder/producer Siggi Loch, who received the award in 2012. The 2014 Jazzahead! ŠKODA Award, which comes with a 15,000 Euro endowment, went to Jan Persson, the Danish photographer who has, over the past five-and-a-half decades, documented a remarkable number of jazz musicians in stills that manage to live and breathe. Living in Denmark, a country that became home for a number of American jazz musicians, in particular during in the 1950s and '60s, when African American artists were treated far better abroad than they were at home, Persson had the unique opportunity to capture artists like Oscar Pettiford, Dexter Gordon, Kenny Drew, Ben Webster and Horace Parlan, amongst American expats, in addition to just about any jazz artist of significance that passed through the city.

Persson's largely black and white work has been published in magazines on both sides of the Atlantic, in addition to appearing in many books and a number of exhibitions—one taking place, in Bremen, at the Artdocks Gallery from April 27 to June 7, 2014.

This was the first time a photographer has received the award that was instituted in 2006, and after a laudation from Danish artist Per Arnoldi, Persson delivered a short but particularly meaningful speech, as he talked briefly about how he came to be a photographer, some of the many encounters he's had during his long life (Persson was born in 1943)...and a parting word that gave encouragement to all aspiring photographers: "And remember: A cell phone is not a camera!"

Prior to Persson's award, a single composition was performed by Phronesis, a trans-European piano trio with, appropriately, one Dane (bassist Jasper Hoiby, who now lives in London), a Swede (drummer Anton Eger) and one Brit (pianist Ivo Neame, but that only whet the appetite for the trio's full thirty-minute showcase that evening. In some ways the trio's participation at Jazzahead might seem a bit odd, given it's not only got five recordings out—its most recent, Life to Everything (2014), on the UK-based Edition Records label just like the group's previous two, beginning with Alive (2010)—but the threesome have spent significant time traveling in Europe, North America (USA and Canada) and other places abroad. Still, this was a trio of highly motivated individuals and any opportunity to spread the word and expand its potential was one to be taken.

It was a particularly treat to run into Neame and Eger again, so soon after seeing them in Norwegian saxophonist Marius Neset's stellar quartet at Jazzkaar 2014 in Tallinn, Estonia just two evenings prior. While both have, over the past half decade, emerged as inimitable players no matter what the context, something different happens when they come together with Høiby in Phronesis, a fact hammered home with particular emphasis when all three (these days, Danish bassist Petter Eldh has replaced Høiby in Neset's quartet) played together in Neset's Golden Xplosion group at the saxophonist's incendiary showcase at Jazzahead! 2012.

The trio's Jazzahead! 2014 was no less exciting as it launched into "Urban Control," the opening track to Life to Everything, another live recording that began with Høiby's virtuosic a cappella intro before Neame and Eger joined in for one of five pieces defined by knotty passages, staggering stops and starts and, well, just an overall complexity that somehow managed to seem completely effortless in the hands of these three outstanding musicians. While there's absolutely nothing that begs comparison to Esbjorn Svensson and his trio, e.s.t., while everyone has been looking for "the next e.s.t." since the Swedish pianist died tragically in a diving accident in 2008, the truth is that the answer may well be right here under everyone's noses.

Phronesis may not have the pop sensibility that yielded some of e.s.t.'s appeal, but the trio's relentless drive has resulted in a slow-building reputation and success that could well be on the verge of becoming something bigger; certainly its full show at the 2012 Festival International de Jazz de Montréal was as good an example of a trio whose playful approach to its rigorous yet open-ended music—music that has, thus far, managed to completely avoid the element of sameness that was beginning to filter into e.s.t.'s until, paradoxically and more than the least bit tragically, the release of its final ACT recording made before Svensson's passing, 2008's Leucocyte—is making fans on both sides of the Atlantic, and whose every new recording since its 2007 Loop debut, Organic Warfare, seems to garner Høiby, Eger and Neame increasing critical and popular acclaim. 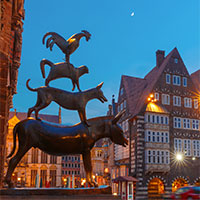