Phronesis was created by Copenhagen-born London-based bassist Jasper Høiby in 2005. Phronesis’ debut album Organic Warfare was released in November 2007 on Loop Records. Organic Warfare was in the US iTunes ‘top 100 selling albums’ charts for two months following its release, and has to date, sold more than 12,000 downloads internationally.

Their hotly anticipated second album Green Delay was released in June 2009. The album has met with huge critical acclaim from The Guardian, Jazzwise and The Times, with Jazzwise voting it as one of their top ten albums of 2009 and journalist Chris Parker describing it as ‘a compulsively listenable, often downright haunting album’.

This success has led to Phronesis signing to impressive new UK jazz label Edition Records, for whom they recorded their third album ‘Alive’ live in March 2010 at the Forge Arts Venue in London. Featured on this album is guest US drummer Mark Guiliana (‘fast-rising star of the drum world’ �” Time Out). The album ‘Alive’ was released on July 26th 2010 and launched at Ronnie Scott’s Jazz club, London on August 3rd.

2010 has seen the trio gain increasing attention in Europe, with acclaimed performances at the Banlieues Bleues Festival in Paris, and the Copenhagen and North Sea Jazz Festivals. Back in the UK, the trio were nominated for ‘Best Jazz Ensemble’ in the Parliamentary Jazz Awards in April, featured on the front cover of Jazzwise Magazine in August and nominated as 'best jazz act' in the prestigious MOBO awards in October. Their charismatic live performances prompted Jon Newey (Editor of Jazzwise) to describe them as ‘the most exciting and imaginative piano trio since EST’.

Høiby created a name for himself in the UK as the bass lynch pin of the Loop Collective (set up by a generation of like- minded jazz musicians who wanted to create a network of shared resources and a platform for artistic collaborations) and an associate of the F-IRE collective. He continues to perform with Loop bands Jim Hart’s Gemini, Fringe Magnetic and Ivo Neame’s Quartet in addition to other high profile projects Tom Arthurs’ Arthurs.Høiby.Ritchie trio, the Mark Lockheart Group, Kairos 4tet, Sam Crowe Group, Richard Fairhurst’s ‘Triptych’, Julia Biel and Compassionate Dictatorship.

“The sort of album that should get bigger jazz names quaking in their boots.” BASS GUITAR MAGAZINE

"a spirited and dramatic three-way musical conversation". THE YORK PRESS

“The sort of album that should get bigger jazz names quaking in their boots.” BASS GUITAR MAGAZINE

"a spirited and dramatic three-way musical conversation". THE YORK PRESS

“...the most electrifying experience to be had in British jazz.” THE TELEGRAPH

“Anyone who doubts there’s a UK jazz scene worth taking note of should listen to Phronesis, who are proof positive that we have bands that are worthy of jazz’s premier league right on our doorstep.” BASS GUITAR MAGAZINE

”A frenetic grooving, great young band with bags of confidence..” TIME OUT 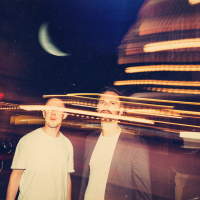 From: Same Moon in the Same World
By Jasper Hoiby

All About Jazz musician pages are maintained by musicians, publicists and trusted members like you. Interested? Tell us why you would like to improve the Jasper Hoiby musician page.