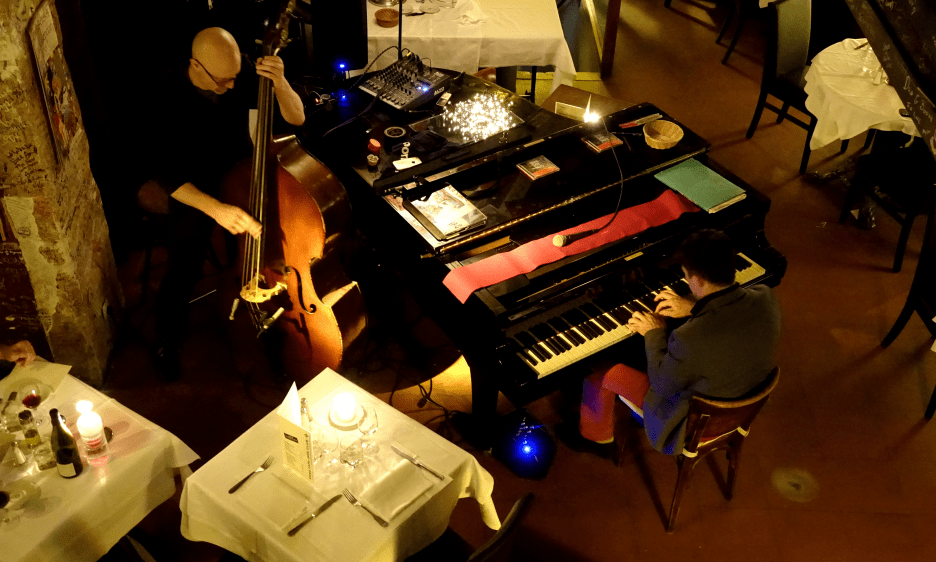 Paris is a timeless and beautiful city, uniform in its Hausmann architecture and relaxed in its easy, cool charm. Not all jazz clubs here have the same presentation. These are some of the clubs and the styles of music being presented live in the city.

Sunset-Sunside is two jazz clubs in the same building in rue des Lombards, (metro Chatelet), fronted by a terrace. It was founded in 1983 by Michele and Jean Marc Portet as a cellar jazz club below their restaurant, primarily for the fusion music of the time. Ten years later, Stephane Portet began operating, and is the musical director for both clubs, producing two performances every night. His ethos is to present two clubs for all jazz, of both Parisian and international touring musicians. Upstairs club Sunside seats 100 in theater style interspersed with some drinks tables. Downstairs in Sunset, a vaulted cellar with clear views of the stage, there is a more relaxed atmosphere with some couch seating as well as tables and chairs. Both clubs have their own bar. Portet is working on building the next generation of jazz listeners by offering reduced rates to young people and by presenting innovative family concerts every Sunday to encourage parents to bring their children to experience a live performance in a jazz club.

The Emie R. Roussel Trio from Quebec received support from the Canadian Council for the Arts for their trip to Paris promoting live their CD Rhythms de Passage (Unimusiqc, 2020). The tracks are "Yatse Club," "Agent Orange," "Maltagliati," "Taniata,"" Est," "Loners" and "Empreinte." This bright, young presentation from classically trained musicians was smoothly delivered but went upbeat in places. Drums from Dominic Cloutier were played just with his hands for quieter, thoughtful pieces, together with stand up bass by Nicolas Bédard. For livelier tracks, Cloutier used drumsticks against the electric bass from Bedard. Rousell played the Yamaha piano and her keyboard, in one piece striking repeated bell sound chords and counting beats through extended gap breaks in the music. She used the differing sounds of keyboard and piano to energetic effect, changing easily from one to another. The trio has toured through Europe, Oceania and Asia. Sunside is a tour stop for many international bands.

Ana de Hollanda sang her "Homage to Jobim" in the downstairs club Sunset, and was joined by songs from {Luiz de Aquino on guitar, with Edmundo Carneiro percussion, while Pierre Baillot played both flute and alto saxophone. De Hollanda had a strong stage presence and an excellent local band in support. Her voice betrayed some nervous notes in the lilting Bossa Nova music, sung in original Portuguese.

The Xavier Thollard trio was at Sunrise to debut their album (re)Compositions (Parallel records, 2020) which included tracks "Body and Soul," "Gee, Baby, Ain't I Good to You," "Song for Bilbao" often Pat Metheny's encore piece, Billy Strayhorn's ballad "Lush Life," "Hallelujah I Love Her So" from Ray Charles, "Lise," "The Way You Look Tonight, Fred Astaire's song from the film Spring Time, Duke Ellington's "Take the "A" Train," "Someday My Prince Will Come" from Disney's "Snow White," although this had a lot more of Miles Davis' version than the cartoon, and "Your Song." The trio worked through the tracks live as a set list. They briefly interrupted the flow to play "Passion Dance" from The Real McCoy (Blue Note, 1967) as their tribute to the passing of NEA Master and five-time Grammy winner McCoy Tyner, who played some of his most memorable piano music with John Coltrane. (re)Compositions are based on the chords of standard titles but Thollard took the pieces far away from the original music, because they had been reComposed. Playing sometimes cross handed, sometimes extremely fast in intricate riffs, Thollard trickled notes in the quiet sections and hammered the piano in the crescendi. There were flashes of brilliance in phrasings as he played. At times he created trance-like settings for his music, moving from loud sections to quiet restful repetitive areas. Thollard was joined on bass by Matyas Szandai and on drums by Simon Bernier who was feeling the music and played some strong solo sections delicately.

It's difficult to talk about jazz in Paris without mention of the jazz guitar and accordion of the Manouche gypsy musicians. "Le Marquis," Dominique Legrix, is a top accordionist in the city and also runs Paris Accordéon in rue de la Lune, a new, used and repairing store with teaching and performance facility for accordion, and guitar. Catching up with him at his regular mid-week gig at Jacopo restaurant in rue Vernet, where he plays with Greg Wailliez on guitar, Legrix said the history of Paris Accordeon goes back to the time of Django in 1944. He advises and teaches increasing numbers of students since the instrument enjoyed a revival. Paris Accordeon hold concerts and open houses to explain the accordion to anyone interested. Enjoying his glass of red wine at the break, Legrix revealed that live performance still brings him most joy, "That's why we learn, and continue to practice" The duo of friends played tightly, the accordion was acoustic in spite of a boisterous audience when indoor fireworks accompanied a birthday celebration. Together the duo worked through a list of Parisian tunes and gave a truly beautiful rendition of "Les Feuilles Mortes" (The Autumn Leaves) led by the sweet, romantic accordion sound.

Chez Papa Jazz Club, in rue Saint Benoit (Metro: Saint Germain des Pres) has been run by Marcel Dassaud for more than 33 years. It's a jazz club with good bistro food, Remi Toulon had played there the night before, (see June 11, 2019 review). Ludovic de Preissac played the 2008 Yamaha piano with Manuel Marches on bass. Tables covered with white tablecloths and napkins were lit by candles and came up close to the piano on the flat floor to set the intimate atmosphere in the photo. There is eccentricity too, the ceiling is plastered with old posters and the walls bear comments from previous diners. The music choices were made by the environment and played with elegance, "Que reste-t-il de nos amors?" then that Doris Day song "I Didn't Know What Day It Was" in a swinging upbeat format. The musicians moved on to "You'd Be So Nice To Come Home To" from Sarah Vaughan's songbook. Marches did some fine bow work in his solos and they played four measures each in fast call and response conversations. The audience were at dinner but they applauded and respectfully kept conversation low.

Caveau de la Huchette is a medieval cellar reputed to have been a meeting place for the Knights Templar in the 16th century. It's on the left bank, right opposite the cathedral of Notre Dame in rue de la Huchette (metro Saint Michel). The club is now celebrating 70 years of live jazz. Hard driving Australian blues guitarist David Blenkhorn and tenor saxophonist supreme Harry Allen had just played three nights. They were followed by The Al Copley Trio for the next six nights. Down one flight of stairs was a long bar, the second staircase led down to the main room with bench seating around the stone walls and in alcoves. The open space was the dance floor. The raised stage had an upright piano with the front panel removed to reveal strings and hammers. Copley began singing John Lee Hooker's "Dimples" (I love the way you walk) as he played piano at a slow blues pace accompanied by drums and bass. Dancers came onto the floor to get their kicks as soon as they recognized "Route 66." Copley hammered high chords to get them started before taking it down to just a few well placed notes while the rhythm section kept the dancers moving. They played along to "Jumpin' Away The Blues" by now both the dancers and audience were moving and clapping. The band slowed to an instrumental version of (I want to stop, and thank you, Baby) "How Sweet It Is" (To be loved by you) a Marvin Gaye song from 1966. Four half notes led them into a Bob Marley song "Everything's Gonna Be Alright" played with a rock 'n' roll not reggae beat. The dancers remained on the floor and more people came in to fill the edges around the dance floor. Manager M. Durise together with his sister declared, "It's a good night, everybody is happy, everybody is dancing." It's easy to forget now that jazz began as dance music in New Orleans. Upbeat Delta Blues and North Texan Boogie-Woogie were played in road houses and juke joints, to accompany drinking, gambling and dancing—two of which were illegal. Both styles carried on as dance music through the Swing and Big Band eras, right up through the 1950s. It was a pleasure to see people enjoying dancing to that music again.

To view the Paris jazz venues that received votes in All About Jazz's Top Jazz Venue poll, go here and filter results by "Paris."