One of America's most prolific actresses was born Doris Mary Ann Von Kapplehoff on April 3, 1924, in Cincinnati, Ohio. Her parents divorced while she was still a child and her mother gained custody. Like most little girls, Doris liked to dance. She would sometimes dance with friends and, sometimes, just by herself. She had dreamed of being a ballerina, but an automobile accident ended whatever hopes she had of dancing on stage. It was a terrible setback, but after taking singing lessons, she seemed to find a new vocation, and began singing with local local bands. It was while on one singing engagement that she met Al Jordan, whom she married in 1941

Meet Monika Hoffman A Swedish singer with Hungarian-German roots, Monika Hoffman studied at Berklee College of Music in Boston, where she performed with the likes of Michael Brecker and Charlie Haden. Back in Europe, her latin vocal jazz album Let's Run Away featured Cuban-American saxophone legend Paquito D'Rivera and she now presents its follow up--Ten Muses. ...

Champian Fulton The Jazz Corner Hilton Head Island December 20-21, 2019 By the time Christmas comes around, those old seasonal songs are worn out. They are exhausted by overexposure in elevators, shopping malls, and streamed everywhere for a whole month of every year.  In complete contrast, a breath of sharp, ... 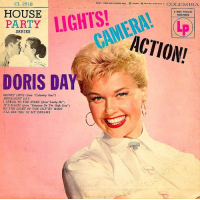 Doris Day, whose melting pop vocals on records and pert sunny image in movies in the 1940s, '50s and '60s made her both a successful multimedia star and a national dart board, died May 13. She was 97. While Day's image was an ideal for many American women coming of age after World War II, it ...