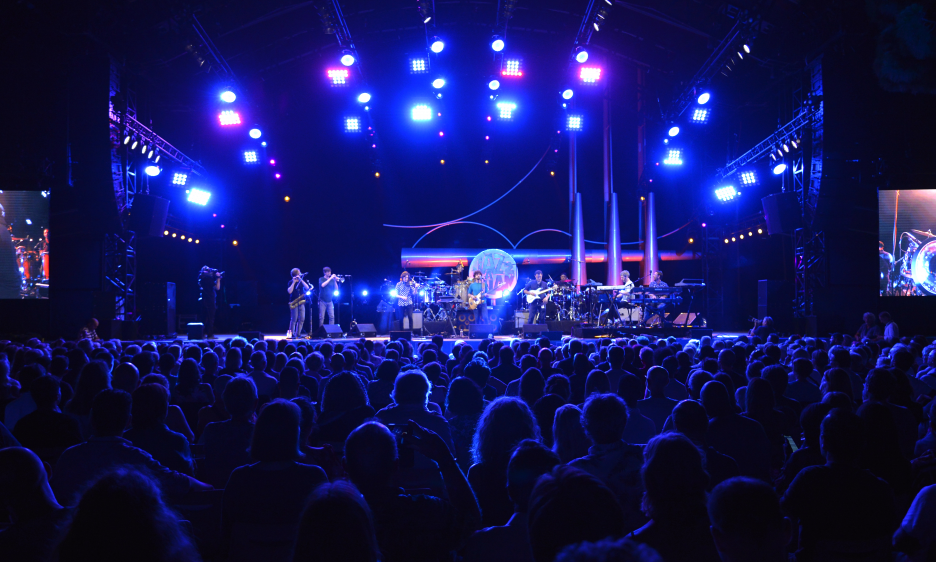 Juan-les-Pins is an elegant beach town near Antibes, in the South of France. The stage is set on the Mediterranean sea shore, surrounded by pine trees and sandy beaches. There is no backdrop, so the audience, seated on metal bleachers, has a clear view of the sea and super yachts as the evenings turn from sunset to night.

The sixty-first annual Jazz at Juan Festival was opened by three—time Grammy awards® winner Cecile McLorin Salvant. The mellifluous quality of Salvant's voice, her power and clarity, sensuous delivery and intensity all acted together to gently but firmly start the festival. Salvant took material from Ghost Song (Nonesuch Records, 2021), where she delved into the sadness of lost love.

Later that same evening, George Benson took the stage, as he has done nine times since 1964, to display top-class musicianship on guitar. He presented some of his famous hits and tracks from Walking to New Orleans (Provogue Records, 2019), in which Benson remembered the music of Chuck Berryand Fats Domino.

On the second evening of the festival, Rhoda Scott, an American lady adopted by France, played her Hammond B3 organ as she has always done throughout her long career—bare feet on the bass pedals. Scott was joined in her Ladies Band by tenor saxophone players Sophie Alour and Lisa Cat—Berro, and drummer Julie Saury.

Later in the evening, composer and singer Paul Anka walked through the delighted audience on his way to the stage, singing his earliest hit record, "Diana." Perhaps his biggest hit was "My Way," which he wrote for Frank Sinatra. Anka's long career has seen his music represented in the top 100 record charts for decades.

On Saturday, Jazz at Juan presented the Roberto Fonseca trio, originally from Havana Cuba. Counted in by the drummer Ruli Herrera the electric bass of Yandy Martinez set up the groove for "Lluvia" (rain) as Fonseca came onto the stage wearing a black hat and red-trimmed coat. Fonseca began by running his hands up and down the piano keys like rainfall as the rhythm section drove on. The piano was building in intensity and volume as Fonseca shouted encouragement to the band. Suddenly, they fell back to a quiet and gentle section and then slid into a samba rhythm as a relief from the violence of the crescendo to arrive at the end of the piece. Fonseca, whose half-brother Chucho Valdes also appeared at Jazz at Juan, signalled the trio into "Katcha Cha," and we were back to samba. After a scat section and bass solo, the 12-ft black Steinway piano was loaded with reverb by the sound man. Fonseca added to the melodic confusion by playing fast and including deliberately discordant chords to end the song abruptly.

Yandy Martinez put his electric base on its stand and took up the double bass on which he bowed an intro to "Besame Mucho" (kiss me lots), the best-known standard throughout the Spanish-speaking world. The double bass played expertly in arco alone on the stage gave a gripping and beautiful introduction. To lift the tune upbeat, Martinez slid his bow into its quiver and plucked the strings pizzicato. The drums gently brushed the melody until the piano came in with insistent chords and ended the tune with an elegant flourish. Fonseca abandoned the Steinway in favour of two electric keyboards, marching heavy chords of "Cadenas" (chains) all over the melody and a drum solo. The Roberto Fonseca Trio went out with "Mambo Para Nina," inviting the audience to stand up and dance.

Michael League, electric bassist and leader of 9-piece band Snarky Puppy, had previously intimated that the band was a collaboration by 15 or more trusted musicians who came together to play as their schedules allowed. He added this evening that the purpose of a leader was to treat everybody separately and respectfully for the co-operative to work. The nine pieces in the band were tenor saxophone/flute, trumpet, violin, Michael League's bass, lead guitar, two keyboard sets, drums and percussion—a big enough wall of sound to illuminate all of the decibel-sensitive lighting rig continuously. Most of their music was from their forthcoming 14th album of unrevealed title, but one track, written by the saxophonist Chris Bullock, was named and called as "East Bay."

While some trumpeters cram as many notes as possible into each performance, Nicolas Gardel is a minimalist who doesn't chip or trip over notes in the rush. Instead, he concentrates on purity and the tonal value of every sound. He delivers quality, not quantity, and having seen the line of people waiting to buy his recordings after a performance, his approach resonates with audiences. Gardel, wearing a cap and white sunglasses against the early evening light, was joined by Thierry Ollé on piano. They opened with "Dance With Me" with Ollé on the 5' black Yamaha piano playing accompaniment. Their composition, "Janice," came next. Gardel is a minimalist, but he is not above trills, glissandi and the occasional growl for effect. In "I Fall in Love Too Easily," they played an off—beat blues section. In "Intimate Memories," Ollé slipped in a phrase from the Beatles' "Eleanor Rigby" just because. A highly polished performance which received strong support.

In 1966, Charles Lloyd arrived in Juan Les Pins with a 21-year-old pianist named Keith Jarrett. Since then, his mantra has been, "I am always on the lookout for the perfect step between notes, that all-revealing sound." The search goes on. For this performance, Lloyd's tenor saxophone and flute were joined by Bill Frisell on guitar and Kendrick Scott playing the drums. In the first section, Lloyd played tenor saxophone, but it was hard to see where the band was headed except up and down the scales. As Lloyd took up the flute, however, the atmosphere changed, and the direction became clear and decisive.

On Bastille Day, July 14, it was fitting that Jazz at Juan should present an accordion performance. The accordion gives the sweetest, romantic music and is part of life in France. Sébastien Farge is a classically trained musician. His direction is more formal than Parisian manouche music. Still, his quartet had straight-ahead jazz set up with Amaury Faye on the Steinway piano, stand-up bassist Gautier Laurent and drums Jean-Marc Robin. They played "Concerto Indigo," where a light touch on the piano made a balanced conversation with the accordion playing phrases back and forth. In "Waltz No Waltz," solos were passed around to each member of the quartet, and in "Lucia," there was a rattling duet between accordion and drums which made both musicians smile. A very French evening of jazz.

Three In A Box

In a park near the festival entrance, Jazz at Juan had a secondary stage erected. Here Three in a Box were led by Cyril Benhamou on Keyboards with Franck Alguhion on Drums and Pascal Blanc on bass. They played original music, which was the result of collaboration. The band started with "Conscience" and "Sweet Melody." The intro to "Waiting" was a psychedelic passage played on a secondary keyboard.

The Joey Alexander story began in Bali when he was six. He listened to his father's collection of jazz records and, seeing his interest, Alexander's father gave him a simple keyboard. From there, the story moves to Kuala Lumpur, where he played for Herbie Hancock and then to the United States, where his exceptional ability gained him a green card. He spent time with Wynton Marsalis at the Lincoln Centre and has meanwhile had three recordings nominated for Grammy® awards and played at the White House. That sounds like the achievements of a lifetime. Alexander is nineteen now, so the best guess is that there is more to come.

He opened the evening with an original "Summer Rising" from the first quiet notes, a subtle change in Alexander's emphasis became apparent as he played a blues riff. Nothing has changed in Alexander's extraordinary quality of playing and inventive composing, but the blues entering his vocabulary is new. The following piece was titled "Angel Eyes," which began gently with the drums pushing for an acceleration which Alexander resisted playing closely with the bass. Another blues section led into a raised tempo where Alexander left the bench and stood up to play the fastest part on his feet at the Steinway. "Winter Blues," another original piece, began with a bass solo accompanied gently by the piano. At one point, Alexander moved to play a Rhodes keyboard standing up, which was a new departure for him. This was a mellow tune, intricate and pensive. Joey Alexander ended with "The Memory," a delicate trickling piece played on Rhodes keyboard and Steinway piano. (The Fender Rhodes has a piano movement. The hammer strikes a metal tine next to a pickup. The touch is closer to a piano than an electronic keyboard).

In a previous performance at Juan Les Pins, Canadian singer and pianist Diana Krall revealed that she sometimes turned to her father's collection of jazz recordings for inspiration. A pure jazz singer, Krall has bridged the gap between jazz and popular music markets with the exceptional quality of her voice and her choice of music. An accomplished pianist, she is always surrounded by quality musicians. She came to the stage in a full-length, heavily patterned orange summer evening dress. They began the performance with "Where Or When," a 1937 Rodgers & Hart show tune. Krall spoke the first phrases in a breathy voice, singing only the higher notes. She has a low voice, classically described as contralto. To keep her delivery varied, Krall flattens the usual North American syllable stresses and replaces them with jazz rhythmic inflections. The result is unusual, giving new life and popularity to some beautiful and timeless tune. Robert Hurst and his bass led the group into "All Or Nothing At All," written by Arthur Altman and first released by the Harry James Orchestra featuring Frank Sinatra (Columbia,1940). In the midsection Anthony Wilson played an extended guitar solo, followed by a slowed, soft piano solo from Krall. Hurst picked up the bass tempo, and on drums Karriem Riggins carried the time as they went from fast to a fading guitar close. Wilson opened the next piece, "You Call It Madness" (But I Call It Love), written by Russ Columbo. The evening went on with Krall breathing new life into some fine jazz standards in her unique way.

The artistic directors of Jazz at Juan delivered yet another top-class festival and will continue with free events in the area throughout the summer.