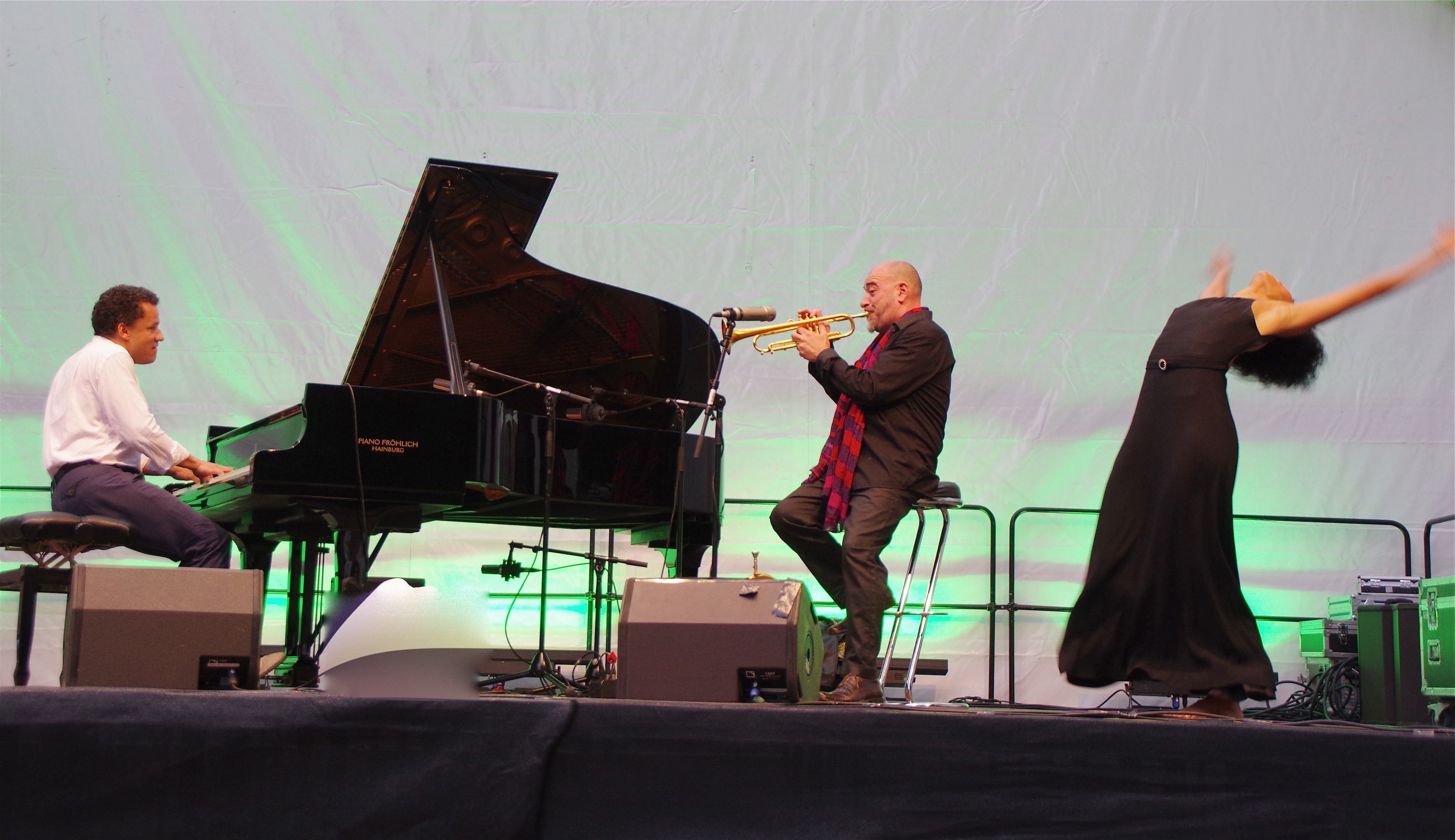 The Jazz and Joy Festival, located in the German town of Worms, celebrated its 25th anniversary. Not far from Frankfurt on Main, Worms carries an illustrious historical heritage, as the site of the Middle Age Nibelung Legend, which was later masterfully rendered in music by Richard Wagner in the series of operas called Der Ring des Nibelungen.

The festival—featuring 40 bands, on five different open-air stages located around the ancient St Peter's cathedral—excels through genre diversity going all the way from pop and world music to traditional and progressive jazz. Coming from a solid musical tradition, which all through the years featured eminent artists such as Bobby McFerrin, Mike Stern, Al Jarreau, Bob Dylan, or Maceo Parker, this year's line up brought together young talent as well as long established artists, such as Peter Erskine, Marilyn Mazur, Jeff Ballard, Iiro Rantala, Rolf Kuhn, Joachim Kuhn, and Oran Etkin, Jacky Terrasson and Stephane Belmondo.

The classical jazz themes carried by the sober drum stride were energized by snare accents and the engulfing depths of the bass, resulting in a calm swing with well-timed romantic excursions on the piano. The trumpet accomplished the journey by setting the pace and the mood of the performance in an alert all engulfing groove, exquisitely fueled by instrumental proficiency.

The forthright trumpet tones turned into graceful trills, which then acquired a sensuous texture, excellently complemented by the bass-drum section. The powerful presence of the sax interacted with the rich trumpet melodiousness in a well-staged dialogue, which backed by the tense piano ascensions, generated those fleeting moments of transport cherished by the listener.

The sound scenery evoked by Rolf Kühn on clarinets, and Joachim Kühn on grand piano reminded of the tumultuous flow of a spring impetuously descending over high precipices, and moos covered rocks, and reaching its calm passage in large tone undulations, which were fluctuating from one instrument to the other in sinuous successions.

Johnny Green's "Body and Soul" theme played by Joachim Kühn on piano with clarity of touch and exquisite internal balance created a transparent spaciousness, balanced by the earthy tones of the bass clarinet. Further on the piano line acquired a sharp edge that was carried into the open by the ascending clarinet line.

The symbiotic confluence of sounds, united in the melodic intensity of the piano, and emulated by the high notes of the clarinet, was stylized into small atonal whirls and abstract wisps, to be paced down again by the recurrent excursions into lyricism.

Marilyn Mazur's Spirit Cave project, live sampled by Jan Bang, with Eivind Aarset on guitar and electronics, and Tore Brunborg on sax, embarked on an intense sonic experience enveloping the back yard of the ancient Worms Cathedral in a lasting aura of dreaminess.

The sampled guitar waves opened up like reverberating underwater shells sending out diaphanous gusts of lyricism. The concrete sensations of the day were transformed into sensuous fluctuations, which grew into a rhythmical conglomerate invoking ancient rites and forgotten songs. A walk on the shore, a nut falling from a tree, a dive in the waves. Floating gusts of translucent foam kissed the sand and retreated with a hiss in wide undulations of white. Golden and ivory grains sparkled in myriads of hues as the pulsing light reflections led into the sonic universe of Marilyn Mazur.

The percussionist, surrounded by the golden reflections of bells and cymbals,opened a world, ephemeral and yet enduring, ranging from whisper to thunder and from raw beats to pure melody. Alternating rhythm and intensity, and emulating the themes through a sensitive attuning of color and texture, the artist set the mood for a powerfully suggestive show.

A solitary tune on the sax, like the call of a lost bird, grew together with the lingering guitar suspensions into a groove that announced a new beginning. As the tension increased white petals were floating in the dome yard. The guitar treble created the illusion of multiplied mirroring, then the tension receded into quiet, the tides of sound returned into their liquid spheres of blue and green, and the golden sands of far-off shores warmed up in the diamantine rays of a new rising sun.

Masaa is a German/Lebanese group made up of Rabih Lahoud, voice; Marcus Rust, trumpet and flugelhorn; Clemens Pötzsch, piano, and Demian Kappenstein, drums. The instrumental trio incorporates jazz and traditional influences creating a poetic atmosphere with a clear conceptual sonority that felicitously integrates the Oriental disposition of Rabih Lahoud's voice.

In a subtle alternation of moods that combined lyricism with drama and melodiousness with strong rhythmical sequences, the quartet presented an emotional show playing songs of passion, of joy and of sorrow. The instrumental lines converged into rhythmical pools, which heightened by recitatives, culminated in peaks of dramatic denouements or abrupt silence.

The drum work in dissipated bell touches and tender brushes or strong down beats anticipated and sustained the instrumental lines, which grew along into solemn cadences, crowned by high vocal ornaments of increasing melodiousness. The clear thematic tracks were carried by the warm tone of the trumpet and the grave accent of the piano, ebbing into small improvisation excursions, which opened out like white desert flowers under the long awaited rain.

The combo Dirik Schilgen JazzGrooves,led by the drummer and percussionist, with Volker Deglmann on trumpet and flugelhorn; Matthias Dörsam on sax; Daniel Prandl on piano, and Matthias Debuson on bass, presented a powerful set of traditional jazz with a South American flavor.

The set list consisted mainly of titles from the album in the making On the Move inspired by the recent travels to Brazil of composer Dirik Schilgen. The sensitive harmonic structure of the piano performance was the connecting element between the clockwork brass section and the compact bass/drum division.

The show was driven by the expanding energy of the drum work that combined accuracy and sensitivity with the right amount of naturalness provided by the inspiriting groove to which the light Latino touch added a remarkably entertaining dimension.

The clarinetist and saxophonist Oran Etkin brought together an international super group composed of Federico Casagrande on guitar, Stephane Kerecki on double bass, and Jeff Ballard on drums. Playing pieces from Etkin's most recent album, Gathering Light, the group regaled the festival with a performance of exquisite instrumental versatility, complex musicality and inflaming passion. Erkin's compositions, a mixture of various traditional influences—from Indonesia, Mali and Japan, to name a few -were united under the soothing mellowness of the Jewish clarinet tone.

"Gratitude" a piece of silk and velvet, started the show with the natural ease of a summer morning in which rhythmical clusters were coagulating around the warm, expanding presence of the clarinet that was carrying the sound to higher melodious peaks.

In "Taxi Dance" the playful interaction of the clarinet and bass lines was backed by the dramatic drums act, fueled by the combination of measures and the tension created by the vertical attacks on the snare, while the laid back presence of the guitar transposed the mood into a register of tender graciousness.

In "Tony's Dance" the mischievous clarinet line was floating along the playful theme while the strong bass drum section developed new rhythmical structures. The guitar was ebbing and flowing into the dense sound texture creating exquisite intervals, where the dreaminess filled out the space with a self-made melody.

In "Shirin Ad Kham"—a mourning song of an Israeli father who lost his son in the war—the tender and passionate bass clarinet theme developed into a dreamy soliloquy of deeply felt melody. Mapping with astounding power of expression the transient moods of sadness, loss and receding pain, the piece closed in a quiet note of optimism and hope.

Doing justice to the festival name the super trio, composed of Iiro Rantala on piano, Lars Danielsson, on bass and the legendary Peter Erskine on drums, bestowed upon the audience a truly joyful performance in which the pleasure of playing was matched by the pleasure of listening. The harmonic energy emanated by natural tides of the show, and its emotional intensity irradiated a glowing musical halo that enveloped the musicians and the audience alike.

The piano sounds flowing with airy elegance were paired by the drum ripples, swish and rustle, and by the all-engulfing bass riffs merging into a perfect instrumental conjunctions that imbued the soundscape with musical intent. With an exquisite sense of pacing, the drums were played with the natural ease of attending a habitual house chore, like cooking, while the bass was vibrating like a large rhythmical membrane dented at intervals with tender melodious in-lays.

The piece "Freedom," played on solo piano, started with dry harpsichord touches, later integrated into an ample lyrical texture, full of nostalgia but still preserving a distinct layer of masculinity. The geometrical left hand movements were complementing the natural gracefulness of the right hand, which was describing large volutes in the air as the rain started pouring down. Still, nobody moved away. Iiro Rantala's eyes were shining with the power of a fleeting thought or a nascent dream. A waltz in large turns started, gradually synchronizing its whirls with the receding rain, while the sound dissipated like a blown dandelion in the breath of the summer breeze.

Jacky Terrasson on piano and Stéphane Belmondo on trumpet and flugelhorn closed the festival with a romantic show covering the whole sonic area from nostalgic narrative tides to stormy percussion attacks on both instruments.