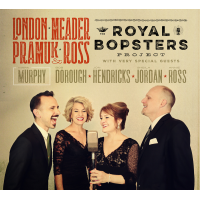 In the beginning, and by "beginning" I mean the February 26, 1926 commitment to shellac of Boyd Atkins' "Heebie Jeebies" by one Louis Armstrong. Legend has it that Armstrong dropped his lyric sheet while recording the song and no words to sing, began to improvise his vocals, creating scat singing. This was one of the first innovations to occur in jazz vocals, which were essentially being created by Armstrong this this and other recordings. It is not a far reach to see how vocalese could emerge as part of the evolution of the genre.

Vocalese is a subgenre of jazz vocals created by writing lyrics to fit recorded instrumental solos. The first recorded example of vocalese was on a 1929 recording by Bee Palmer singing words to the Bix Beiderbecke's coronet solo from "Singing the Blues." It was not until the late 1940s when the style was galvanized by Eddie Jefferson's 1952 penning of words to James Moody's 1948 saxophone solo on "I'm in the Mood for Love," which became "Moody's Mood for Love." While this made a ripple, it was not until 1954, when King Pleasure blew the doors open with his version and several other Jefferson-penned vocalese, including Charlie Parker's "Parker's Mood" and Gene Ammon's "Red Top."

With Lambert, Hendricks and Ross came ensemble vocalese. From there came the Manhattan Transfer, New York Voices, and Take 6. But back to Lambert, Hendricks and Ross...Dave Lambert died as the result of a car accident in 1966, but Jon Hendricks and Annie Ross remain very much alive and performing. Both are brought together with other vocalese royalty, Mark Murphy, Bob Dorough, and Sheila Jordan in The Royal Bopsters Project. The project is the brainchild of vocalist Amy London and Darmon Meader, tenor and principle arranger of The New York Voices. Vocalists Holli Ross and West Coast bass voice and arranger Dylan Pramuk make up the core quartet that supports these jazz greats on this recording.

Central to this recording is vocalist Mark Murphy, who can only be considered in the same thought as Eddie Jefferson and King Pleasure in the field of vocalese. He is featured on 4 of the 12 selections on the disc, with the other "Royal Bopsters" showing up on one each. Murphy's contributions are the highlights of the release. He reprises his 1970 recording of Freddie Hubbard's "Red Clay" as "On the Red Clay." Murphy is in excellent voice. He also re-addresses his take on Horace Silver's "Senor Blues," which he sings with punch and vigor. Amy London provided be lyrics to Charlie Parker's "Chasin' the Bird" retitled "Bird Chasin'" which includes a spirited reading of passages from Jack Kerouac's On The Road, bringing the entire Beat theme to a full boil. The pinnacle of the recital occurs on a re-tooling of Murphy's interpretation of Miles Davis' "Boplicity" (presented here as "Bebop Lives") in cooperation with Holli Ross. It is exquisite.

This is not to short change the other royals. Arkansas Jazz Hall of Fame member Bob Doroough presents his "Nothing Like You has Every Been Seen Before" and remains vital in his early 90s as does Jon Hendricks on "Music in the Air." Shelia Jordan percolates on Horace Silver's "Peace," while the inestimable Annie Ross kills on "Music is Forever." This project unites a new voice in Jazz Quartet singing, whose ideas are fresh and plans are set. The project is well framed by excellent liner notes provided by New York City Music writer James Gavin, whose own Deep in a Dream remains the definitive cultural commentary on the life of trumpeter Chet Baker. If all musical projects could be this well programmed...

Music in the Air; On The Red Clay; Peace; Basheer, the Snake and the Mirror; Senor Blues; Invitation; Bird Chasin; Music is Forever; Bebop Lives; Just Step Right Up; Nothing Like You has Ever Been Seen Before; Let’s Fly.