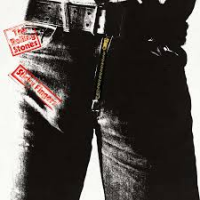 And the initiative may be altogether legitimate, despite the fact that, juxtaposed with some of the best material and studio productions thereof in their history to that point (and, in fact, since then), this debut of their own custom record imprint featured songs and arrangements bland in almost equal proportion, reaffirming an impression that despite the icon status to which the band had ascended, they remained artistically erratic.

Sticky Fingers' cover alone garnered plenty of attention on its own, designed by pop artist Andy Warhol to feature an actual metal zipper within the LP cover graphics, but on a more substantial front, the ten track record was the first to fully feature guitarist Mick Taylor who had joined the band two years prior but only slightly contributed the Stones' Let It Bleed (London, 1969). In the interim he had fully integrated himself into the group as documented on Get Your Ya Ya's Out (London, 1970) and his influence lent as much professionalism as invention to a band continuing to evolve since their return to concert stage as documented on the aforementioned record. Remastered audio doesn't do much to eradicate the purposefully murky sound quality of the original recordings. Yet if the swagger of the opening chords of "Brown Sugar," personified by vocalist/songwriter Mick Jagger's deliberately garbled singing, communicated anything it was that the earthy (borderline crude) personal the Stones had cultivated was now fully formed. Even when it didn't take easily recognizable form, as on the extended coda of "Can't You Hear Me Knocking," saxophonist Bobby Keys wailing spotlight giving way to a liquid solo from Taylor, before the two intertwined over the incessant and insistent rhythm chords of guitarist Keith Richards.

It's arguable the diamond-hard chords at the foundation of "Sway" was any more obvious as the Rolling Stones, but there is really no mistaking "Bitch" as none but theirs, the muscular horns simultaneously emphasizing drummer Charlie Watt's and bassist Bill Wyman's steadfast timekeeping and punctuating Jagger's enervated account of his physical and psychic restlessness. "' Moonlight Mile"'s bleak but picturesque balladry, accentuated by stark strings that illuminate the bleak lyrics, make it one of the highlights of the Rolling Stones' entire discography, albeit in a much more sophisticated style than its corollary, the folk-cum country likes of "Wild Horses:" where Jagger once again reminds what an effective singer he can be with and without affectation.

He's almost as effective on "I Got the Blues," but the derivative nature of the song itself reduces the track 's impact. Likewise, "Dead Flowers," suffers because the band, especially the singer, don't take the country style seriously, certainly not so much so as on the pure country-blues of Robert Johnson's "You Got to Move," the acoustic bottleneck of which recalls the return to roots of Beggars Banquet (London, 1968). "Sister Morphine" is chilling despite itself, the jagged guitar combining with the ominous bass and drums to illustrate how producer Jimmy Miller worked so effectively with this band to elevate even their basest instincts, i.e., to cater unselfish-consciously to prurient interests (or which they were criticized in some quarters of the rock press of the times). True to life as it might well have been, it simply doesn't resonant on such personal terms

The latter triad of tunes, the relatively lackluster portions of Sticky Fingers seem slightly less so with decades of hindsight, while the highlights retain their brilliance even in comparison to the studio outtakes and live performance of the period comprising a second CD in this set (and there is a more expansive deluxe package with an entire performance from this very period). Guitarist Eric Clapton renders the take of "Brown Sugar" to which he contributes (almost) as valid as the official cut, suggesting a contribution of his to other numbers here may have improved them and the album as a whole: imagine his blues passion on "Flowers" or an even more extended improv on "Knocking."

Nonetheless, Slowhand might well have been nothing but superfluous had he joined the Rolling Stones on stage at the Roundhouse during their 1971 tour stop at the London venue. Joining Keys, trumpeter Jim Price forms a horn section belying its two-man size, while pianist Nicky Hopkins interjects melodic sheen to the otherwise dirty grind of the core quintet on the likes of "Live with Me," "Stray Cat Blues" and "Honky Tonk Women," Taylor's lead guitar scalds on "Midnight Rambler," but his self-discipline directs his playing to burn as deeply as the song demands, while Richards, contrary to later statements on their respective roles, outdoes himself as a rhythm guitarist navigating the band: here the Rolling Stones certainly do acquit themselves as once introduced to the stage: "the greatest rock and roll band in the world. " More importantly in the context of this reissue, these stellar concert cuts, juxtaposed with the high art of studio craft, posit the theory the group's never been better than at this juncture of their career. Alternate studio versions of Sticky Fingers numbers further that impression by suggesting what an abundance of creative juices were flowing through Jagger, Richards and co during this period (ironically foreshadowing the prolific likes of the subsequent double album). If it seems difficult to discern the difference in this acoustic version of "Wild Horses," imagine the difficulty for the band and its producers to make such choices. Likewise "Brown Sugar," which sounds equally more commercial and more informal. This looser take of "Can't You Hear Me Knockin'" captures Jagger and the musicians are just finding their way into the song as a vehicle for expression. They're even closer on "Bitch," flailing their collective way through a song they clearly so enjoy, it's difficult to stop playing it once they start (this in marked contrast to the jaded attitude they evince, natural or put upon, during this twangy take of "Dead Flowers."

The double CD set comes sans written content except appropriately detailed musician and production credits, historical perspective otherwise supplied by an array of photos from the stage, studio and public appearances at the announcement of the recording. It's a knowing and wise choice as the music itself, because the style with which the Rolling Stones comport themselves, whether playing or not, makes a memorable statement on its own terms.