Morris Day & The Time with Con Brio at Stern Grove 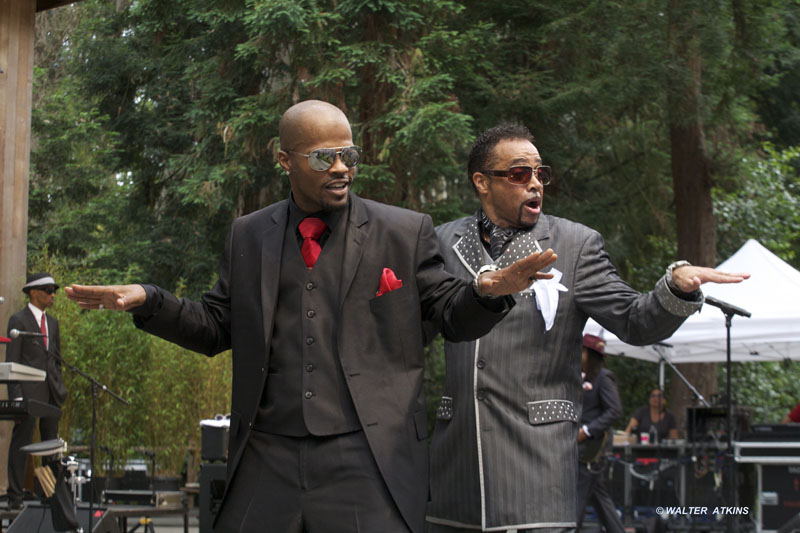 Morris Day and The Time with Con Brio performed as part of the Sigmund Stern Grove's 78th summer season in San Francisco. Sunday's overcast but warm day opened up with the group Con Brio (With Spirit) and their exciting blend of rock, soul and funk. The SF based band and their soulful lead singer Ziek McCarter, quickly took the chill off the gray Bay Area weather and heated up the growing SG venue.

Not only did McCarter launch the afternoon show with his expressive vocals, he proved to be an extraordinary showman whose infectious energy level would rival a young James Brown. CB started with "Paradise," "Temptation," "Sundown,""Open/Close," "$$$" (Money Song)," "Wings of Love," 'Kiss The Sun,"' Closer," and "Give It All." CB's brass section of Marcus Stephens and Brendan Liu was blowing some seriously feisty horn riffs throughout the day.

Con Brio's hi octane session at the Grove was absolutely electric from start to finish. They definitely lived up to their name.

After the intermission, Morris Day & The Time served up an afternoon of entertaining music and smooth showmanship. The group presented classic songs from their repertoire with the patented Day flair for the dramatic.

Starting off with "Get It Up," the ultra suave Day and the band went through their funky pop dance numbers and literally had the SG fans standing through the entire set list. MDATT performed the popular number "Cool" while spelling out the letters with hand gestures. "Pandemonium," the title track from their 1990 gold album came next.

MDATT's bouncy set also covered the favorites "Ice Cream Castles,""My Drawers" and their signature songs "Jungle Love" and "The Bird" from the 1984 album Ice Cream Castles. Original band members included drummer Jellybean Johnson and keyboardist Monte Moir. Johnson and bassist Ricky "Freeze" Smith formed a funky rock solid foundation for the unflappable front man Day. Talking to the pumped concert meadow house, Day compared himself to a bottle of chilled champagne. Like the cold bottle, he doesn't sweat, he "condensates." "With a massive and enthusiastic throng of music lovers, the capable SG event staff, including publicist Monica Ware and stage manager Jenifer Graff, kept the concert running without a hitch all day. The hip ballad "Gigolos Get Lonely Too" had the entire Grove swooning in time to the music.

Day and his valet worked both side of the wide SG main stage to give their admirers a splendid time. During the set, Day put on a long white coat while he sang and checked himself in a mirror. Later in the show, several eager ladies were selected from the enormous standing crowd for some sexyfun audience participation on "If The Kid Can't Make You Come."

"Castles" and "The Walk" were neatly sandwiched between "Kid" and "Bird." People were dancing and standing for MDATT on every thing they played. Day made sure to throw a handkerchief from both sides of the ample outdoor stage as the women surged forward for position. One of the staffers commented this was one of the best shows of the season.

For the supercool "Bird," more avid participants were brought on stage for the funky dance tune. MDATT closed out their session with the killer "Jungle Love" as plenty of joyful people screamed for more.

Morris Day & The Time along with Con Brio filled the Sunday afternoon in San Francisco with terrific music and over flowing spirit. If today's exuberant concert was any indication, SF Bay Area residents will be looking forward to the 79th edition of the long running Sigmund Stern Grove Festival.