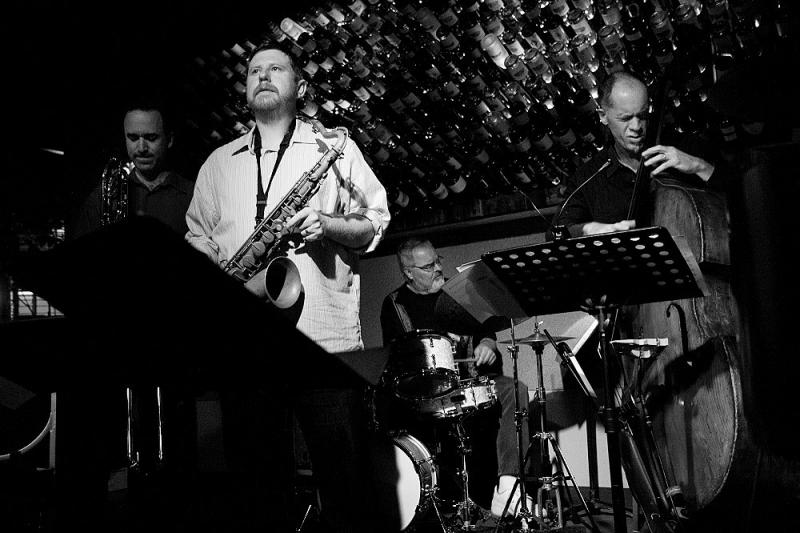 Saxophonist/composer Jason Robinson—whose dual release of The Two Faces Of Janus (Cuneiform, 2010), and Cerulean Landscape (Clean Feed, 2010), put him on the map of wider recognition—finally made his impending departure from San Diego official with this farewell concert, held at Dizzy's.

Robinson has spent the better part of 13 years in San Diego since arriving in 1998 to study with renowned composer Anthony Davis at UCSD. While here, he cofounded the important free jazz co-op Cosmologic, with trombonist Michael Dessen, bassist Scott Walton and drummer Nathan Hubbard, and his relationship with Davis matured from student to collaborator.

The saxophonist has been splitting his time between here and Amherst, Massachusetts, where he's been teaching for the last three years; in July, 2011, his wife is poised to make the move to New England permanent.

The concert began with the core quartet resting, while Robinson spun a long opening cadenza that revisited John Coltrane circa Crescent (Impulse!, 1964). He found a particularly reverberant spot on the stage which highlighted his lush, probing tenor excursion. The saxophone began inserting more late Coltrane-isms into his story, and eventually slipped into long, held multiphonics and slap-tongued squawks and squeals to finish up. White entered with chords voiced in fourths over Thorsen's insistent pedaling, and the band jumped into to Robinson's "The Wiggle Room," a furious free-bop piece that alternated between a wicked 4/4 time and a suspended section over pedal tones.

White came bursting out of the gates with disjointed fragments punctuated by dissonant chords and clanging repetitions over Thorsen's open G string and Moore's martial snare drum rhythms. Robinson started building a solo that coiled sequences from the lowest notes on his tenor spiraling up to the altissimo register. After a brief but explosive drum solo, the band took the tune out in unison.

Anthony Davis then joined Robinson for a glorious reading of "Shimmer," an aria from the opera Amistad—composed by the pianist about the Spanish slave ship rebellion in the early 1800s. Robinson coaxed an almost soprano-like timbre from his tenor, while Davis supported him with lilting block chords and probing arpeggios. After the melody, Davis worked a fiendish solo that had his right hand cascading streams of notes against a jabbing left hand. "Shimmer" ended with hushed tones that drifted into the ether.

With Davis remaining at the piano, Thorsen and Moore returned and the woodwind ensemble took its seats for Robinson's "Silence Becomes A Roar." The piano began with quiet tinkling, evolving into nervous fragments that ramped up the tension while the bass laid down some serious ostinati. Suddenly, the woodwind ensemble entered with some oblique harmonies and Robinson began the melody, steeped in the blues. The winds were exquisitely voiced, and the composition started to take on echoes of Mingus-meets-Oliver Nelson-meets Muhal Richard Abrams. Dessen hit the ground running, with material from the blues scale organized in a totally fresh fashion—avoiding clichés while keeping both feet in the gut-bucket. David Borgo rose for a solo that chirped and fluttered, before adapting a grittier and grainier aesthetic that plunged straight into the blues with warbled vocalizations.

Davis spun a very lyrical statement, with long strands of melody that wrapped around each other and definitely told a story. After a short, pointed drum solo, Robinson played call and response with himself while the woodwinds orbited around him with alternately supportive harmony and disruptive cacophony.

Moore opened up "The Two Faces Of Janus" with hands across the toms and snare for a vaguely African, conga sounding groove, soon joined by Thorsen's probing bass vamp while White returned to the piano chair with knotty voicings. Sundy and Dessen took to the stage, and all three horns began jostling the melody in a very loose unison. Robinson leapt into his solo, igniting sparks of racing scales that stopped to worry a phrase, then blasted into upper register squealing punctuations. Sundy navigated between pure, chocolaty singing in the lower regions to yelping forays in the altissimo, while Robinson and Dessen flanked him with sporadic commentary.

Davis returned for another duet, this one a medley of Robinson's "Vicissitudes (For Mel Graves)" and the pianist's "Of Blues And Dreams." The saxophonist began with repeated trills and short fragments of scalar runs. Things got real quiet, then Davis erupted with electric energy—pounding thunderous left hand clusters and melodic declaratives that sounded like a player piano about to explode. The second piece featured the two musicians trading off on the melody—each exploring sections on their own. Davis unleashed a skittish solo with surging contours, and Robinson responded with a throaty vibrato circling around the ruminative piano harmonies.

The expanded ensemble returned for "Tides Of Consciousness Fading." Kaiser conducted, while the winds played long, held dissonant intervals in a manner that recalled multi-instrumentalist Anthony Braxton's work for large groups. Certain members held the long tones while others, like Weller and Dessen, were given wild card roles to solo at will. All the while, drummer Moore anchored the proceedings with soft mallets, repeating a dark, throbbing beat.

"Cerberus Reigning" seemed to be written as a feature for the rhythm section. Thorsen led off with wide, bowed harmonics moving into a dark arco melody, shifting on a dime to a brisk pizzicato walk —then straight into pedaling over Moore's funky hi-hat groove and rim-shot chatter. The bassist got in a pleasantly off-kilter solo that mirrored the song's contours and White followed with a florid piano excursion. Starting very slowly, Moore built a masterful drum sequence of controlled abandon.

Everyone assembled onstage for the finale, "Forest Cover," which began very freely, with squeaks and squalls over atonal harmonies. Both trombonists utilized their plunger mutes for almost obscene chortling. A melody and form emerged, almost like something from Mingus' The Black Saint & The Sinner Lady, (Impulse!, 1963). Several of the excellent ensemble members got a chance to shine, with Geib taking a long, beautiful trombone solo and Weller continuing with a soprano spot that balanced mayhem and grace. Friedkin stood up and delivered the goods with a tenor solo that reflected his time as a student of Robinson's and his own unique and emerging voice.

Robinson is a major talent who has absorbed the modern saxophone lexicon from 1960s masters such as Archie Shepp to present-day giants like Roscoe Mitchell and Braxton. His farewell concert was a two hour-plus sendoff of blistering free-bop and gorgeous ensemble work. San Diego's loss is New England's gain.